Home . Articles . Columns & Blogs . Full and By . Advice from a master of self-reliant sailing: jump overboard

Advice from a master of self-reliant sailing: jump overboard 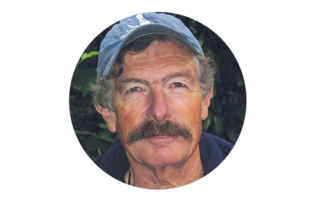 I'd like to go sailing with Robin Knox-Johnston sometime. I understand he can be a bit crotchety, but I think we'd get along. I admire his commitment to the ethos of the self-reliant sailor. Besides, anyone who recommends that sailors jump overboard instead of calling for help in some circumstances would have to be an interesting shipmate.

RKJ, as he's frequently called to get around the clumsiness of a hyphenated surname, got my attention when he wrote: "Why are so many sailors frightened of the water? It's as if beneath the surface of the sea lurk unimaginable dangers and monsters waiting to trap those who enter."

The comments rose out of his irritation over boaters whose first instinct when something goes wrong at sea is to cry for help. He was grousing specifically about sailors who call for rescue after wrapping a line in their propellers. "Whatever happened," he asked rhetorically, "to jumping overside with a knife or a hacksaw to cut the prop free?"

I can picture RKJ leaping into the sea with a knife between his teeth. At 73, he looks tough enough to do it. In the photo over his column in Yachting World, the British sailing magazine with the same oversize pages as SAILING, his darkly-tanned, deeply-lined visage looks like a topographic map of Cape Horn.

I agree with him about the diminishing self-sufficiency of sailors. I can also relate to his recommended remedy for a fouled propeller.
Once after a spectacular yard-sale broach (sheets and sails and pieces of spinnaker arrayed everywhere as in a rummage sale) while crossing the finish line in a breezy race, I started the engine, put it in gear prematurely and promptly strangled the propeller in many turns of a spinnaker guy. I figured that if I was dumb enough to do that (the memory comes back every time we do a man-overboard drill), I deserved the honor of freeing the prop.

I took a knife "overside" with me (in my hand, not my teeth), but found that it was little help. There were so many layers of rope that I'd still be sawing if I had relied on the blade. I was eventually able to unwind the mess, but I have to say it was not quite as easy as RKJ makes it sound. "Holding your breath underwater is not as difficult as it seems," he offered helpfully. I don't usually find that difficult at all, but doing it long enough, and frequently enough, to free a prop choked in snakelike coils of high-tech line is another story.

But back to the old mariner's point. Making a mayday or pan-pan call because you can't use the engine on your sailboat (assuming you're not in imminent danger of fetching up on the rocks) is surely a trivial use of emergency services. After all, if you weren't interested in a swim, you could just sail the boat home and persuade or hire someone to deal with the problem at the dock.

RKJ says the Royal National Lifeboat Institution answers 250 calls a year from yachts in British waters that have something tangled in their props. He's right to make a point of it because Britain's admirable lifeboat service, manned by well-trained volunteers and classified as a charity supported by donations, is too precious to waste on sailing inconveniences.

It's a little different in U.S. waters. Make an emergency call about a fouled prop here and you're likely to get a visit from a commercial towboat and have to produce a credit card before being spared a jump overboard.

I guess that's an incentive to self-reliance, though sailors shouldn't need it. Being able to take care of yourself at sea is the essence of sailing.

As the first person to sail singlehanded non-stop around the world, RKJ is an expert on the subject of self-reliant sailing. He accomplished the feat in 1968 on his 32-foot Suhaili, a heavy Atkins design that, as he told SAILING readers in a reminiscence published in our 45th anniversary issue last year, started life as large teak log delivered to the Bombay docks. She was no speedster-it took more than 10 months of self-reliance to complete the circumnavigation. (By comparison, the around-the-world sailing record set this year is 45 days.)

"Those 312 days alone at sea with Suhaili," he wrote in SAILING, "created a bond that has continued to this day....and every time I step on board her I get that feeling of impending freedom that comes when we can get out to sea and away from land influences and interference."

RKJ was knighted by Queen Elizabeth for his accomplishment and has remained quite visible in sailing circles and elsewhere ever since. He was even featured in a BBC reality TV show called "Top Dogs," the premise of which was a competition between geezer adventurers who had found fame courting danger in different fields. The sea dog competed against two sexagenarians, a polar explorer (ice dog) and a war correspondent (dog of war).

In an article about the show, the Daily Telegraph wrote, "Apart from high cholesterol, plastic lenses in his eyes and occasional difficulty finding the right word, Knox-Johnston is extremely fit, despite 10 cigarettes a day and a fondness for the amber nectar."

What if RKJ and I did go sailing and a line got tangled in the prop? I guess we'd have to arm wrestle for the privilege of being self-reliant. Winner goes overside. He looks pretty burly; he might win. That's fine with me.