The marine diesel engine is an amazing piece of machinery. These engines are reliable, safe and require minimal maintenance. If you look after just a few things, your engine can easily run for 10,000 hours, potentially outlasting the boat itself.

Diesel engines need just four things to run well: oil, fuel, air and cooling. And it’s not difficult to make sure they have those things.

Nothing will stop an engine faster than poor lubrication, but fortunately the system is easy to service. Oil is truly the lifeblood of your engine. It lubricates your engine, cools the pistons and provides a seal between the piston and cylinder. It also encapsulates contaminants and carries them off to the oil filter. 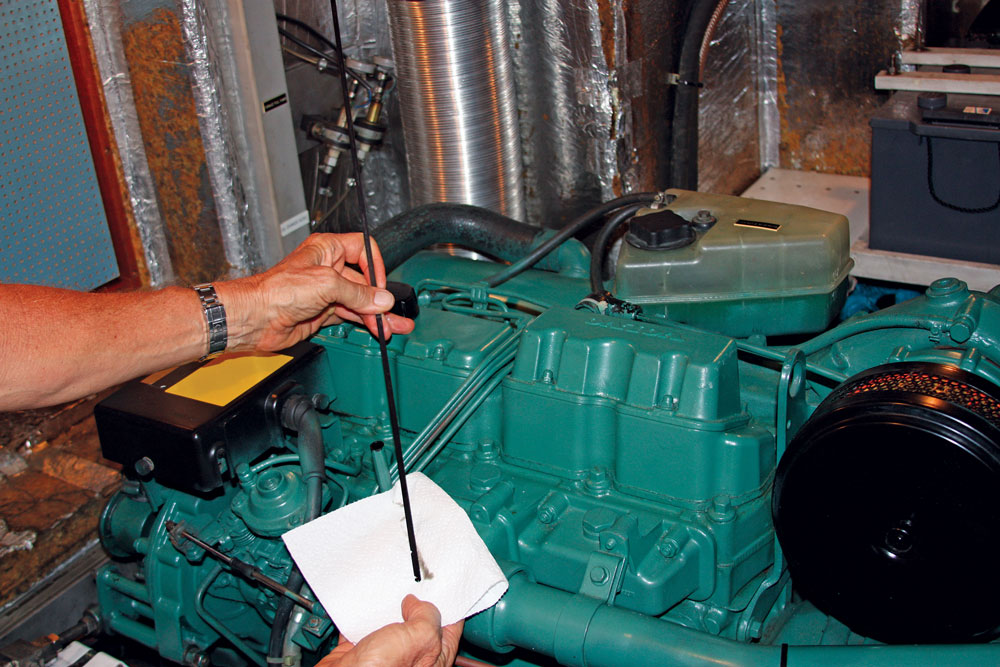 The first step in maintaining the oil in an engine is to check it before every trip. The oil level doesn’t need to be up to the top line on the dipstick, but it should be in the proper range. Don’t worry about the color of your oil; it will be golden when new but quickly turns dark with soot. This is normal and to be expected.

Your boat’s engine works hard, much harder than the engine in your car, so it’s important to change your oil frequently. On a seasonal boat, change the oil at the end of the sailing season. Dirty oil can be corrosive, so it’s not good to have it sitting in the engine during a winter layup. If a boat is run year-round, follow the service guide for your engine, which will list the oil change interval. It will like be about every 100 to 200 hours.

Fuel does more than power your engine. Diesel engines use fuel to lubricate and cool the injection system. An engine at speed will pull two to three times the fuel it needs to run from the tank and return it via the return line. All this fuel flow makes fuel filtering critical. Most engines have two filters: a primary off-engine filter (Racor is a popular brand) and a secondary on-engine filter. It’s important to change both filters at the specified intervals.

Primary and secondary filters are set up for staged filtration. The primary filter is coarse and filters the larger particles, while the secondary is finer and catches the small particles. A primary filter will typically be 30 micron, and the on-engine filter is 5 to 10 micron. The combination of filters does the best job, but they both get dirty.

A primary Racor filter has a bowl on the bottom of the housing that is designed to catch water and large particles. Check the bowl from time to time. If you see water or debris in the bowl, there is likely a fuel problem. You may need to pump off the bottom of your fuel tank with an oil change pump, or the problem could be big enough to require fuel polishing, mechanical processing to remove sludge, water and non-fuel solids.

An engine ingests an incredible amount of air when running and it’s important to make sure that it has plenty of access to proper ventilation. Most engines have a screen or foam air filter, and it’s important to make sure it stays clean. Take steps to keep your engine compartment clean. It’s easier than you may think for dust and salt particules to make their way into an engine.

There are three maintenance items in a typical cooling system. The raw water pump is driven with a rubber vane impeller. This impeller is a replaceable item and should be replaced every one to two years. If the impeller is left to get old, it will break up and shed rubber bits through the cooling system. It’s a good idea to replace the impeller every year, so you know the impeller is fresh, and you mitigate the risk of it breaking up underway.

You also need to periodically check the coolant level and replace it every two years to prevent corrosion in the cooling system.

Diesel engines are meant to work, and you aren’t doing your engine a favor by running it slow.  When an engine is underloaded it struggles to run at a normal operating temperature, and the fuel injection pump runs inefficiently at low speeds. The result of this is a build up of moisture, carbon and corrosive compounds in your oil. This dirty oil is destructive to your engine.

To avoid this damage, run your engine at a normal operating speed, generally at two-thirds of max rpm, and allow it to come up to temperature. It’s also a good practice to run your engine at a higher speed periodically. The higher rpm increases oil pressure and flows more fuel to keep everything running well.

Avoid running out of fuel. Aside from the obvious problem of the engine stopping, you can have other problems.

Fuel starvation can cause other problems, too.  Before the tank runs dry, the dregs of fuel from the bottom of the tank are brought up, along with some sediment. This may only partially clog the fuel filter, but some sediment may

Fuel is used to cool and lubricate your injection pump, when the fuel stopped your pump kept turning without adequate lubrication. Diesel engines are tough, but this excess wear can do damage.

Treat your engine well and it will reward you with years of reliable power.