Cruising in the white nights

The Baltic ARC cruising rally takes sailors from Germany to Russia’s St. Petersburg for high-latitude sailing during the long days of summer 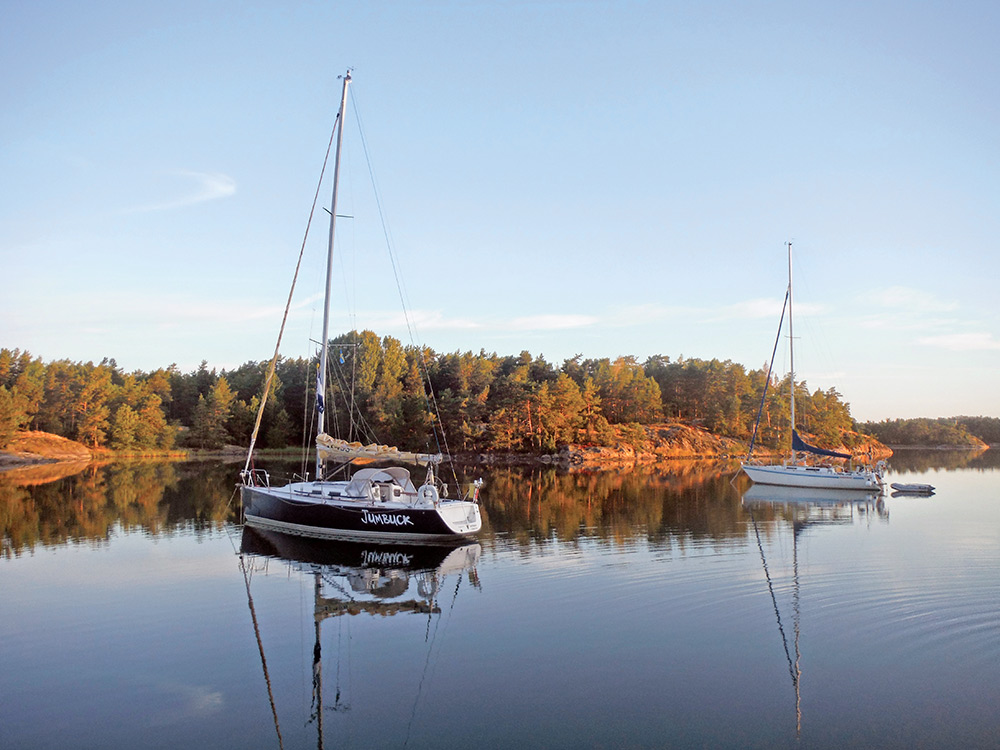 The Baltic ARC Rally tuckes into a cover in the Swedish archipelago.
Bill Stringer
It was hazy, hot and the air was still and the seas were calm; certainly not the conditions we were expecting as we motored down the narrow channel toward the northern city of St. Petersburg on the eastern edge of the Baltic that so many of us had traveled so far to visit. But the uncharacteristically warm and sunny weather was only the first salvo of what proved to be a barrage of sensory overload that no reasonable expectations could live up to.

The sticky air also smelled of diesel fuel and the sea was the color of hot chocolate as we had the first glimpse of an ultra-high-speed-hydrofoil ferry screeching dangerously close in the perilously narrow channel at more than 40 knots. At that point, we’d already experienced a uniquely Russian combination of bureaucracy and lawlessness when we cleared customs at the oh-so-stereotypical Soviet-era customs dock on the fortress-island of Kronstadt that has been protecting St. Petersburg from the west since Peter the Great took it from the Swedes in 1703. Being buzzed by a steady stream of 40-knot hydrofoils was just the icing on the cake. Bill Stringer photo
Our 27-boat-strong cruising armada had reached the halfway point of the World Cruising Club’s, first running of the ARC Baltic that began three weeks prior, roughly 800 miles to the southeast in Kiel, Germany. We’d already become quite accustomed to the pleasant combination of sailing, sightseeing, socializing, sunny skies and the logistical support that makes participating in a rally so worthwhile. When you add the fact that I was lucky enough to be teamed up with Tommy and Anita Edlund, highly experienced cruisers who graciously agreed to take me aboard their sneaky-fast X-412 Tomanita II for the Visby-Tallinn-St. Petersburg portion of the rally, any expectations I had prior to my arrival didn’t stand a chance.

It  was easy to find the marina in Visby on the Swedish island of Gotland where I caught up with the Edlunds and the ARC Baltic fleet. I just needed to look for the flags flying from the boats and navigate through the sea of tall, blond, sunglass-sporting, high-heel-wearing beautiful people who had descended upon the quaint, 12th century walled city for a week of partying and looking pretty that’s simply called “Stockholm Week.”

And instead of jumping on a boat and immediately heading offshore as I often do, I had a chance to look around for a few days. In fact, the luxury of exploring the area, especially on numerous well-organized sightseeing tours with fellow rally participants, was one of the many unique aspects of rally life that I most enjoyed. And there was lots to see in Visby, with its fascinating Viking and Hanseatic history, stunning stone architecture and numerous churches. 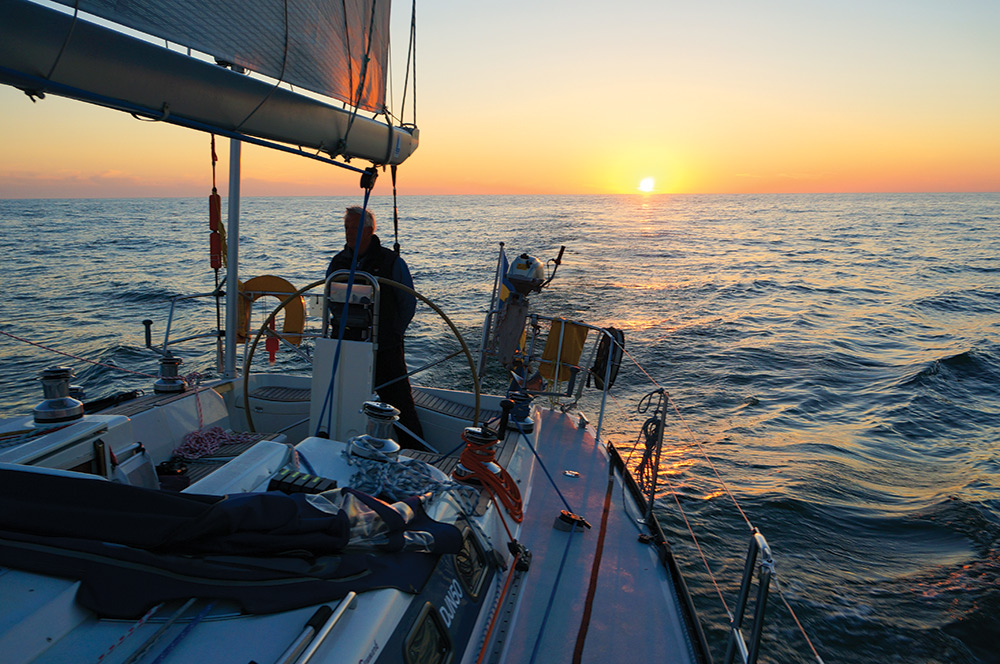 Bill Stringer photo
But it wasn’t until I got a chance to mingle with rally participants at an impromptu barbecue on the dock as the sun dipped briefly below the horizon at around midnight that the real magic of the rally started to sink in. And with the forecast calling for sunny skies and a blustery broad reach up to the small Swedish island of Gotska Sandon the next day, the fun was just beginning.

Sailing in a large fleet of boats measuring from 35 to 57 feet that descends upon sparsely inhabited islands and romantic cities en masse may run counter to the conventional ideal of self-sufficient cruisers heading out alone over the horizon to experience new lands for themselves. But when a rally is done right, it’s a blast. We gathered on the beach of a virtually uninhabited island after our glorious, 7-knot sleigh ride up to Gotska Sandon. We left Visby Harbor as a group and never really lost sight of each other during the speedy, 50-mile reach. We anchored together, and then everyone stormed the beach in their dinghies like it was an amphibious military exercise.

The operation was a well-executed rally rendezvous organized on the VHF by Joel and Cecilie (the yellow-shirt-clad, efficient and friendly World Cruising Club rally coordinators). They gathered us all together on the beach so Hans Hansell, the official rally leader, Baltic expert, and captain of the lead boat could provide a guided tour for the whole group. Bill Stringer photo
After our quick tour, everyone returned to their boats and prepared to sail the next 190 miles to Tallinn. Most boats departed the anchorage during the short four-hour period of darkness around midnight because the winds were favorable for the 24-hour voyage. Hansell’s Jeanneau 49 Working on a Dream left first in order to arrive with Joel and Cecilie in time for them to work advance-team logistical magic. Participants in the ARC Baltic can take the advice and guidance, but are also free to do their own thing. In this case, I got lucky. Tommy and Anita are Swedish and have sailed to Tallinn before.

“We’ll have to sail through one night anyway,” Tommy said. “We may as well have a nice dinner and get some sleep on the anchor tonight.”

After letting Joel and Cecilie know our intentions, we awoke to a peacefully empty anchorage, sunny skies, and building westerly breeze and got underway.

“What’s in the yellow bag?” I asked as the mighty Tomantia II with carbon fiber sails came alive in the freshening morning breeze. We’d set our course to Tallinn with the apparent wind locked in at 120 degrees—perfect for the spinnaker in the yellow bag that I knew Tommy was just itching to set.

Soon, our wake was sizzling, our skin was warmed by the strong, seemingly neverending Scandinavian sunlight, and it was impossible to stop smiling as the spinnaker flew and the speedo hovered effortlessly in the 8s.

“This is some of the best sailing we’ve had in a long time,” said Tommy, enjoying an off-the-wind moment.

The next day we arrived in a city that was ruled by the Teutonic Knights in the 13th century. We were guided into the marina by one of the “yellow shirts” on the radio and were greeted by lots of friendly rally members who were willing to grab our lines. Then we were given a highly detailed information packet that described everything from customs information and the marina Wi-Fi code, to where to get provisions. Anything you needed to know was covered, and if it wasn’t, Joel and Cecilia would find out.

We were dazzled by Tallinn, from its centuries-old history and Estonia’s complicated relationship with Russia, to the warm locals and the hopping night life. This stop also gave us a chance to get better acquainted with our fellow rally participants at an organized dinner in a restaurant off the main square in the old city. Some were rally veterans. Others were new to offshore cruising and appreciated the security of the group.

Experienced cruisers John and Sue Allison, who sailed their J/109 Jumbuck doublehanded from the United Kingdom, said they love the safety in numbers aspect of cruising rallies. Australian Andy Oliver took delivery of his brand-new Hanse 505 Hanse Sailor in Germany so he could specifically participate in the ARC Baltic. He said he liked being part of an organized event so far from home, and was considering sailing in the World ARC to eventually get back to Australia.

Some sailors like myself  had signed up to crew for a few legs, and others were in for the whole Baltic circumnavigation. But everyone I spoke with described the chance to sail into our next destination, St. Petersburg, Russia, as the reason they made the trip.

The screeching hydrofoils and the scent of diesel as we entered the harbor provided the pitch-perfect introduction to one of the most extreme, entertaining, and paradoxical cruising destinations I’ve ever experienced. And it goes without saying that our arrival at the foreboding customs dock guarding the city was made infinitely easier thanks to the World Cruising Club’s considerable advance work. The stimulating nature of the place was everywhere—from the pseudo-disco-modernness of the night clubs near the marina located next to abandoned communist-era factories, to all the gilded excess of Tsarist St. Petersburg that was only a short trolley ride away. And the cultural immersion started almost immediately with an introductory tour of the city that included a visit to the Peter & Paul Fortress, Saint Isaac’s Cathedral and the Dostoyevsky museum. But nothing could really have been more Russian, or more appropriate, or more over-the-top, than our visit to the Romanov’s private theater in the famous Hermitage for a performance of “Swan Lake” later that night; quite an evening out for a sunburned sailor who’d never been to the ballet before. And the cultural cascade continued the next day with guided tours of the glittering acres of art in the Hermitage and Winter Palace.

It takes more than a few days to fully appreciate the historic significance of St. Petersburg, but, sailing there, and living in the marina at the mouth of the Neva River for several days, provided a unique view of the city and Russian culture that might not have been available on a more touristy trip.

When my time in St. Petersburg and on the rally wound down, I was pretty jealous of my wonderful hosts and the rest of the fleet that had three more weeks of this kind of curated cruising ahead of them. Any skepticism of a rally’s pack mentality I may have had before I started was gone. The sailing had been great, logistics were easy and I’d seen things I never expected. And that was all before the flock of Russian bikini models descended upon us in the marina.

They teetered down the uneven dock in high heels and colorful swim suits. They said in a mixture of Russian, English, and hand gestures) they were doing a photo shoot and were wondering if they could pose on the bow of Tommy’s X-412 to promote a race?

How could we refuse?