Let’s take a look at what the same designers, VPLP, can do with an extra 6 feet 6 inches of LOA. If you compare the two sailplan profiles I think you’ll see the establishment of a specific type of cruising cat. To my eye it’s defined by the extended deckhouse top providing shelter in the veranda area aft. On this larger cat there is a lounging area forward on the cabintop, a flying bridge control station and a dining area aft. It’s really a huge amount of space. 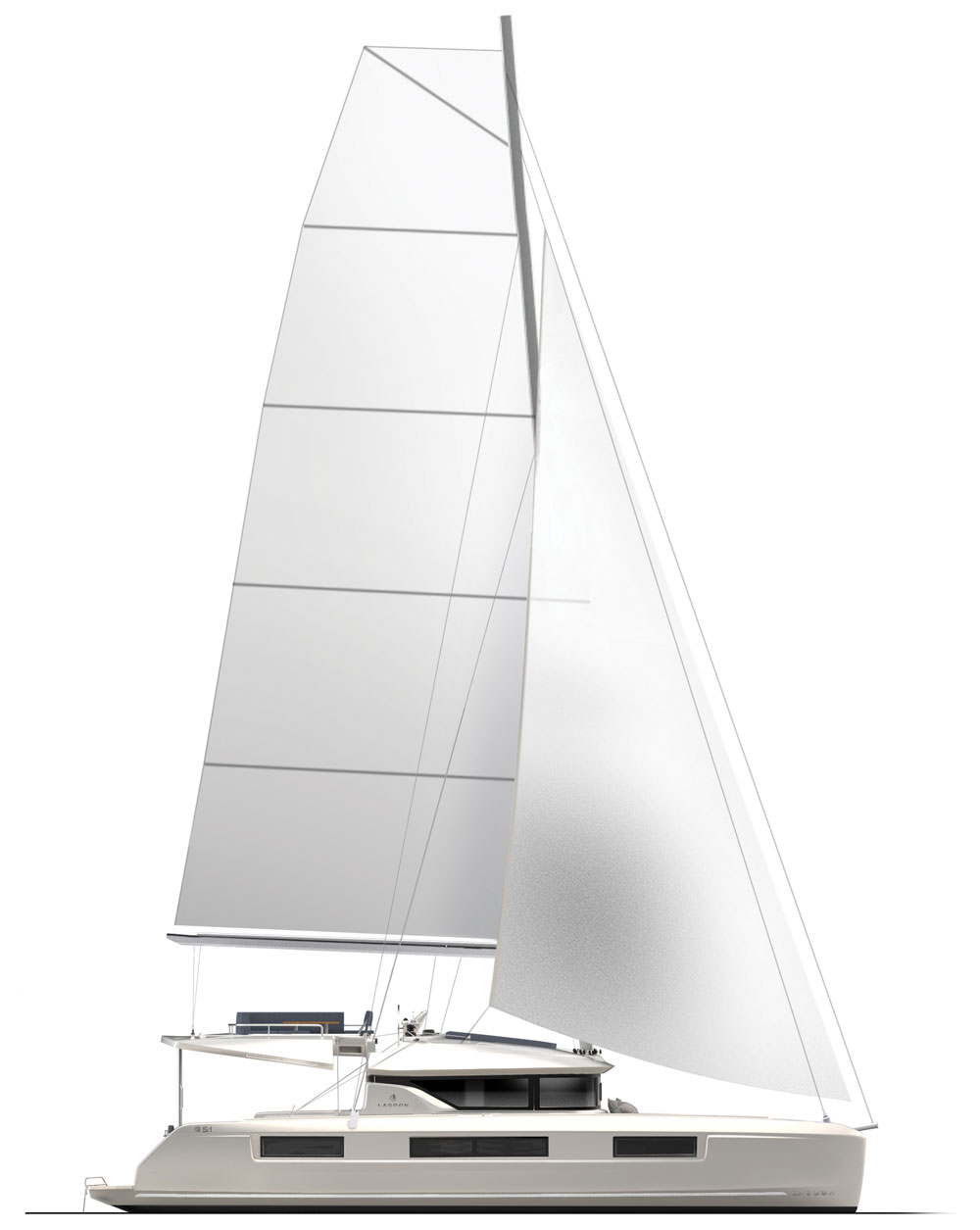 I feel humbled by the fact that the designers think I am such a good design reviewer that I don’t even need to see the underbody of this new cat. “Bob will have no trouble intuiting the shape of the hull and appendages.” I’ll fake it. The D/L is 220. It doesn’t say whether this displacement is “lightship” or “loaded” but given that high FD/L we’ll assume it’s loaded. The L/B is 1.89. Draft is 4.58. I’ll guess that the keel is a low, low-aspect-ratio type that you see on most cruising cats. I see  upper and lower chines much like those on the Excess 14 but with less curvature.

The Lagoon offers three layouts: three sleeping cabins, four sleeping cabins and six sleeping cabins. I can’t see calling them “staterooms” as they are a bit to snug for that label. They are comfy cabins where you can sleep. In the four-cabin layout you get four double berths with an attached head and shower stall for each cabin. In the three-cabin layout the owner gets the entire starboard hull with the large head with a huge shower stall all the way forward. I can see calling this a stateroom. There is even what appears to be a walk-in locker or dressing room. It’s very posh.

There are three sleeping cabins in the port hull. They share two heads. For the six sleeping cabin layout there are four cabins on the port side and a mirror-image two-cabin layout in the starboard hull. That’s a potential of 12 people for dining. There is not room in the main cabin for twelve but there is that upper deck dinette and another small dining area on the veranda. There’s a lot of living space acreage.

All the sail controls are led to the flybridge control station. There are winches and what looks like line bins port and starboard of the centerline wheel. The dinette aft of the wheel is huge. The mainsheet traveler is aft of the dinette. There is a lounging area forward of the wheel and another lounging area on the main deck level forward of the mast. This is a very clever deck design. I like the way you access the flybridge level port and starboard and then drop down to the veranda level aft.

The SA/D is 20.46 for the standard rig and there is a larger rig offered with an SA/D of 20.88. Both have square-top mains. I don’t see a vang on this rig either. It would seem a bit odd to me to sail without a vang. Maybe you could rig an old fashioned block and line vang to the rail if you were after that last half knot. Look how high the clew is on that working jib. The jib tracks are on the housetop and lead easily to the flybridge winches. The more I study this design the more I like the look. The vertical lines to the house are a bit “strong” but they make perfect sense for both the deck layout and the interior layout. They maximize the deck area for placement of deck hatches.

It looks to me like VPLP has the cruising cat well figured out. 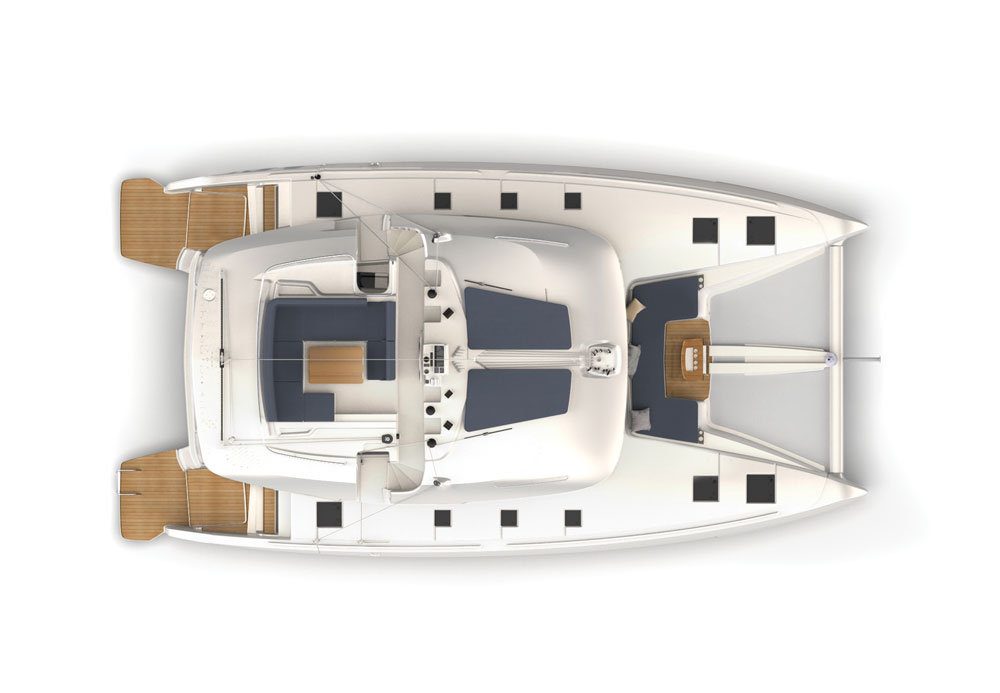 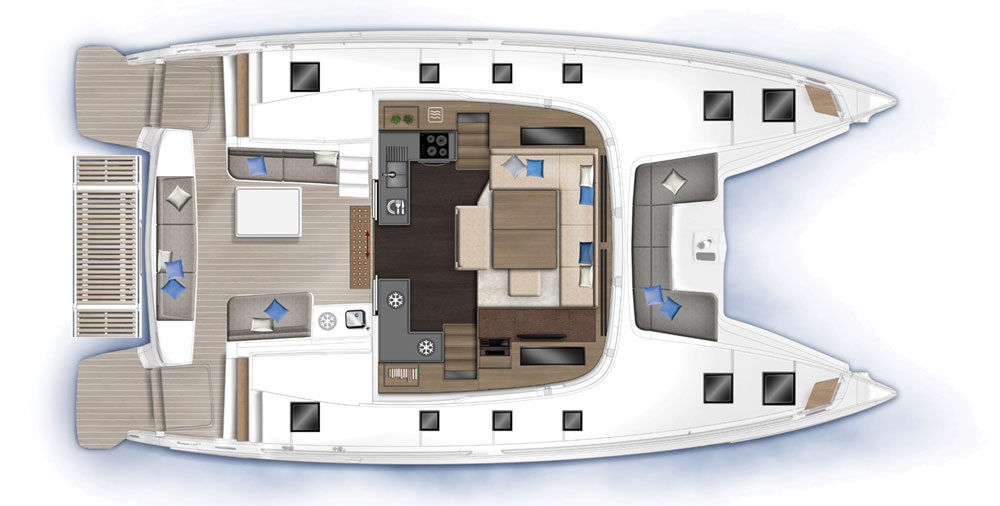 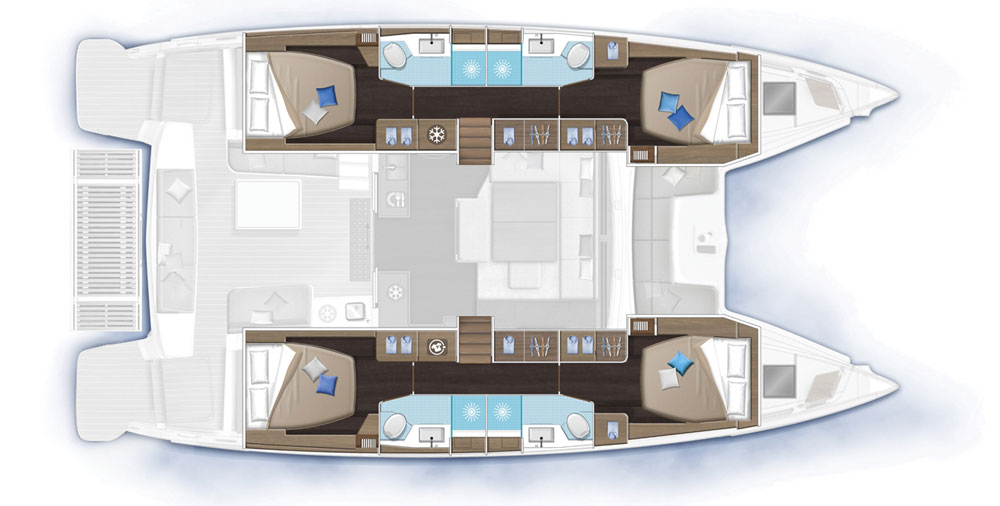