By Robert H. Perry
Here it would be nice to have modern version of a Friendship sloop. Remember those? Instead we have this new sport boat designed by my good friend Bob Perry. He could certainly draw that Friendship sloop but in this case the market called for a smaller version of the Flying Tiger 10-meter built at the Han Sheng yard in Xiamen, China. Engineering was done by Bob's good friend Ivan Erdevicki, working from his office in Montenegro. The company that sells the Flying Tiger boats is Hiptrader, run by Bill Stevens. Supervision is by Bill's son Brian. 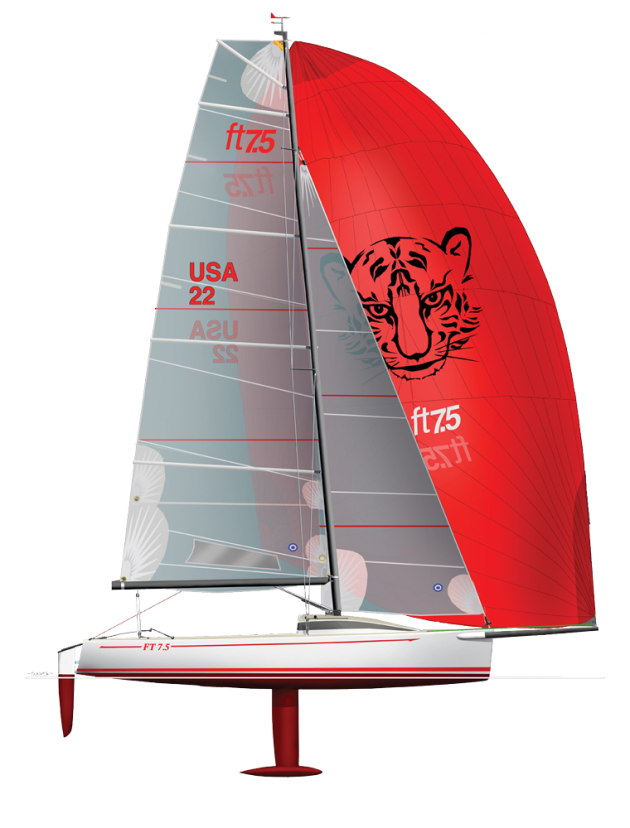 In about two years we built 100 FT 10Ms. They have become very popular in Australia. But we thought a smaller version was needed. The FT 10M is a real hotrod and the thought was from the start that the new 7.5-meter Tiger should be toned down a bit to make it more suitable for family sailing and less reliant on the physical ability of a large crew. To that end the 7.5M has chines aft to add stability while also making the hull easier to plane, as the chines do flatten out the buttocks aft. The bow of the 7.5M is not as fine as the bow on the FT 10M, and the L/B of the 7.5M is 3.1, compared to 3.56 on the FT 10M. The D/L of the 7.5M is 86 with the boat in measurement trim. Draft is 6 feet and the keel fin is GRP and carbon fiber over foam with a steel box beam supporting a 1,287 pound flattened elliptical bulb. The keel retracts for trailering. The rudder is a combination of carbon fiber and E-glass.

The rig was developed with the help of Bob Pattison at Neil Pryde Sails in Connecticut. Bob had been very involved with the FT 10M start up. With fat-head mainsail and standard jib the upwind SA/D is 38.9. The 6-foot, 3-inch carbon sprit retracts into the hull. All spars are carbon fiber and the spreader sweep is 28 degrees, eliminating the need for a backstay and runners. This is a very simple boat to sail. A spinnaker bag can be snapped into the companionway to aid in quick chute douses. We have worked very closely with Clive at CST Spars out of Sydney, Australia, on the carbon spars using his experience with Australian 18-foot skiffs. A lot of teamwork went into this rig and, in fact, the entire design. I also want to add that our close connection with the Web site Sailing Anarchy once again proved very important in refining this design. Working on Sailing Anarchy can be a bit of a mud fight but in the end the best ideas usually win. Mud fights can be fun.

Tom Hirsh owns two FT 10Ms and has a sailing school in San Diego. Sailing the FT 7.5M for the first time, singlehanded, in 15 to 17 knots of breeze, Tom's comment was, "This is a boat I'll be sailing when I am 70." Racing in Key West Race Week against a fleet of larger boats, due to a rating of PHRF 78, the 7.5M showed good boat speed against much larger boats. Consider that the J/35 the 25-foot 7.5M raced against rated 71. The next race for the 7.5M will be the Fort Pierce, Florida, Chaw Race with a new PHRF rating of 91, matching the FT 7.5M against the Melges 24, also rated at 91.

There is really no interior in a boat like this. There are two berths port and starboard, so you could sleep on the boat in a pick but I won't try and sell you this boat as any kind of comfy little cruiser.

The auxiliary for this daysailer is an outboard hung of the transom. Construction uses the resin infusion process with an all E-glass layup. The FT 7.5M is a boat designed to satisfy the most demanding performance-oriented sailor, but in this case we have reduced the intimidation factor. The goal was high performance in a very manageable package, and I think we have achieved that. This boat is a very stable platform.