Home . Articles . News . Technique . How to optimize for shorthanded sailing

How to optimize for shorthanded sailing

Most of us don't sail like Joshua Slocum or Dodge Morgan, but there are occasions when we're out on the water alone in dicey conditions, wishing we had an extra pair of hands or at least a boat fitted out to maximize what a shorthanded sailor can accomplish. 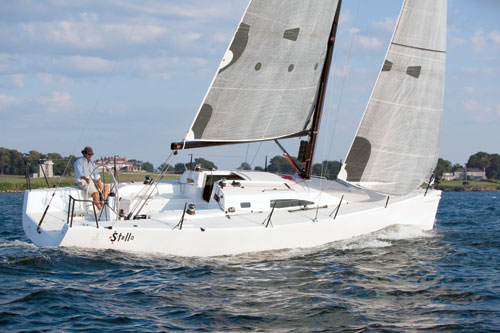 With a few key equipment upgrades, some minor retrofitting and a dose of common sense, sailing by your lonesome can be a breeze.

For starters, while at the dock, take a look around the cockpit. Stand at the helm and imagine yourself in a rough sea with challenging wind. Can you easily reach the mainsheet without leaving the helm? What about the traveler?

If the traveler is mounted atop the cabin, consider relocating it across the cockpit benches. Another option is to feed the twin traveler adjustment lines through a couple of cheek blocks and re-direct them to rope clutches bolted to the coachroof to either side of the companionway.

Solo skippers typically install an entire row of rope clutches, each handling a different line, and all accessible from the cockpit. Rope-tending bags can be mounted on the bulkhead below the clutches to keep the cockpit neat since you won't have anyone standing by to coil the lines. 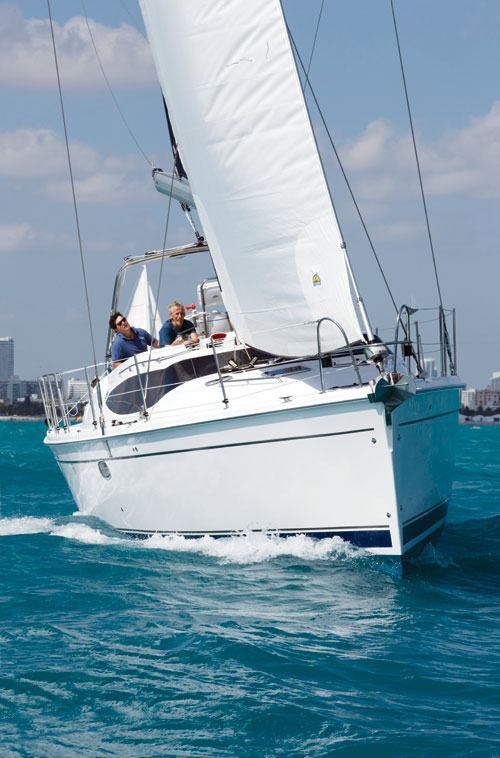 Certainly a furling headsail is a bare necessity for the shorthanded sailor. It's no picnic scrambling forward to douse the jib, hauling it down hand over hand while kneeling on the pile of sailcloth because every wind gust threatens to carry the sail over the side. And then there's the hassle of trying to keep the sail clean and dry while grabbing hold a slimy mooring pennant line or hauling up a mud-choked chain and anchor. It's so much easier to simply roll up the jib.

If you don't have a furling jib, keep a four-foot length of thin-diameter line in your pocket for lashing the sail to the deck once it's dropped.

A furling mainsail should also be a serious consideration, albeit encased in the mast or boom. Sailors who would rather not chance the occasional jamming that occurs with furling mainsails should rig the main halyard so it can be released from the cockpit.

The main halyard should be passed through one of the rope clutches within reach of the helmsman. The same set-up applies to the boom vang. You shouldn't be forced to abandon the helm because you have to crawl forward to adjust the vang.

A set of lazy jacks or one of the zippered pod-like bags attached to the boom will help tame the mainsail as the halyard is released and the sail comes sliding down. Installing cars (such as those made by Harken), which connect the mast-track slides to the luff of the mainsail, can make it easier to raise and lower the sail. It also translates to smoother reefing.

A Dutchman set up, in which thin lines run through grommets in the main sail in order to haul it down like a window blind, is another option.

Shorthanded sailors planning to fly a chute should look into purchasing running sails that can be launched and doused from a sock or tube, which simplifies the procedure.
Jib sheets should run freely along the deck and be long enough to wrap around self-tailing winches within easy reach from the helm. Most boat designers install winches where they can be sensibly tended, but if your deck was laid out by a naval architect less tuned to such details, a variety of brackets and pedestals can be used to modify the winch location.

Primary winches should be two-speed and self-tailing. Power winches with a waterproof foot-controlled switch on the cockpit sole are another option, albeit a costly one.

Shorthanded sailors should reef their sails early and often, as the old rule advises. The kind of reefing system depends on the boat and the mainsail. Roller, slab, jiffy and single-line reefing are among the choices. Individual ties work fine to snug the sail to the boom, but the process is laborious and less practical for the singlehanded sailor.
Adding a preventer is also highly recommended to prevent an accidental jibe.

Once the boat is rigged so that the sails can be adjusted from the cockpit, the shorthanded sailor should think about instrument visibility. Some boats are fitted with gauges so small you have to be a foot away to read the numbers. It might be more convenient to mount them above the companionway or on the binnacle. If the gauges are oversized, so much the better, since being able to quickly get data could prove critical. For instance, it's important to be able to easily read the depthsounder from the helm when approaching shallow water.

There will be times when staying at the helm just isn't possible, which means an autopilot is a must. If you don't have an autopilot, crank down on the steering pedestal knob to lock the wheel or tiller. If tightening the knob doesn't work, tie off the wheel or tiller with lines from both sides of the cockpit coaming.

When it comes to navigation, a chartplotter and GPS with clearly visible displays will make life easier.

As safety measures, stow a handheld GPS in a cockpit compartment as a backup, along with a loaded flare gun, gas-canister fog horn, serrated-blade knife, flashlight or headlamp, small first-aid kit, binoculars, portable VHF radio and cell phone. Ideally, the binnacle will have a jack for a microphone that connects to the boat's primary VHF radio in the cabin below.
If you require prescription medications, keep those handy as well, perhaps in a small waterproof box that can be stowed in a cockpit locker. You don't want to be hunting for your nitro pills in a squall.

Hopefully weather conditions won't be so severe that you can't activate the autopilot and go below to use the head. But just in case you need to man the helm for hours uninterrupted, a bucket stowed inside a cockpit locker could provide welcome relief.

Comfort can also mean bringing along a vacuum-sealed Thermos that will keep the coffee or tea hot while you sail the boat. Same goes for a water bottle.

Although the boat may have a chartplotter, paper charts are still a great way to navigate and important to have on hand. Fold them before leaving the dock so pages showing your route can be easily viewed. To keep the chart from blowing away, attach it to a plastic cutting board with two heavy-duty rubber bands.

Some shorthanded sailors recommend installing a bow spotlight for entering unfamiliar harbors after dark since you won't have a crewman with a handheld light shining the way.
Safety considerations should also include wearing an inflatable PFD with harness and a tether that can be clipped to port and starboard jacklines running from bow to stern. Some solo sailors install stainless pad eyes in the cockpit sole or adjacent bulkheads where the tether can be attached while at the helm. At very least, have a boarding ladder mounted on the transom in case you fall overboard.

If you are anchoring, an electric-powered windlass will eliminate some  stress. Without it, weighing a stubborn anchor could turn into a slow and cumbersome maneuver that allows your boat to drift once the tines are dislodged but before all the chain is aboard. There are several ways to prevent drifting when weighing anchor, including putting the boat engine into forward gear at low idle and heaving to.

Shorthanded sailors faced with the prospect of going aloft to thread a broken halyard through a sheave might want to consider a device made by several manufactures that is comprised of a bosun's sling and an assemblage of block and tackle that create a favorable hauling ratio for one person. The sailor clips onto a healthy halyard and carries a messenger line during the ascent.

Other concepts for getting to the top involve using a pair of mountaineering ascenders and foot loops, or bolting a series of folding steps to the mast, although many sailors complain the latter adds wind resistance and unwanted weight. To avoid all these hassles, rig the boat with a spare halyard before leaving the dock.

Returning to the dock or mooring presents certain considerations to the shorthanded sailor. For instance, losing a boathook overboard when attempting to grab hold the mooring pennant line is always a possibility. Having a second boat hook clipped to the stanchions near the bow is highly recommended.

Tying a two-foot length of quarter-inch, high-strength line to one of the holes in the bow stem can also make a difference in a big blow. If you are unable to pull the mooring pennant loop back to your bow cleat,  slip the length of slim line through the loop and lash it off to the bow cleat. It will hold until your heart stops pounding and you catch your breath. Then you can slip the pennant loop over the cleat.

At the dock, lifelines should have a safety gate with pelican hook that can be unclipped, allowing the shorthanded sailor to scramble between deck and dock. A deck cleat installed midships can make the job of docking easier, providing a secure and convenient point for the spring line. Lash a 10-foot length of docking line to the cleat and fit the bitter end with a braided loop. Lead the line outside the shrouds and lifelines and back to the cockpit.  As the boat settles into the slip, hop off and make fast the spring line.

The same preparation can be followed for the bow line. It should be tied off near the bow and run aft, outside the shrouds and lifeline, to the cockpit where the solo sailor can easily take it ashore and cleat it off to the dock after the spring line is secured. Remember not to make either docking line so long that it might foul the propeller if dropped in the water.