These first two boats are interesting in that they are aimed at similar markets, but come from different eras.

The Cheshire Cat was originally introduced in 1965, but production was stopped in the mid '70s. The enthusiasm for small cats just wasn't enough to justify keeping this 14-footer in production. Things have changed and multihulls have never been more popular, so I.F.G. decided to reintroduce the Cheshire Cat at the last Annapolis Boat Show. While most small cats tend to be "dumbed-down" versions of racing cats, the little Cheshire was originally designed as a true high-performance cat with the features found on many of the bigger, exotic cats.

It's a narrow cat with an L/B of 2.15. The hulls are deep-chested forward with a soft and dated-looking bow profile. This rocker is exaggerated forward, then flattens out aft of the mast. This deep forward area will help keep the Cheshire Cat from burying its bow.

The centerboards are well aft and quite small. Draft with the boards down is 2 feet, 1 inch. All-up weight is a modest 185 pounds.

The rig features a rotating mast. It's interesting that if you use full battens in a 40-footer you get four and maybe five battens, but in this 14-footer you get seven if you include the foot batten. I wonder if that is a function of rating rules only allowing four battens. I had five battens on my Valiant 40. 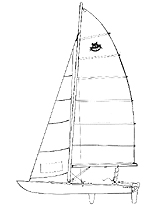 The Cheshire Cat is designed as a singlehanded cat. It can take a crew of two, but it's at its performance best with a crew of one. The most interesting feature of this cat to me is the capsize righting method. There is a 5-foot pole called the "righting bar" that stows on the underside of the trampoline. This pole is swung down to be 90 degrees to the tramp and you use it to lever the cat back into the upright position.

If you want to step up in performance and price in a singlehanded cat, you might look at the brand new Inter 17 built by Performance Catamarans, which also builds Nacra Cats. This is a big, muscular cat-rigged cat (no headsails) that features 4-degree canted hulls that stay on their optimum sailing lines even when you are flying a hull. The stems are plumb and the entries very fine with U-shaped sections that carry enough buoyancy forward to resist pitchpoling. All-up weight is 295 pounds. Note the difference in rocker distribution in this cat compared to the Cheshire. The rocker of the 17 is very flat. Note also how deep the high-aspect-ratio board is. Draft with board down looks to be about 4 feet.

The big, fat-head mainsail has eight battens and is Mylar. Although I called this a cat rig, there is a 183-square-foot asymmetrical spinnaker that will really increase the off-the-wind horsepower.

There is also a racing version of the boat that comes with a tall carbon-fiber mast and a 170-square-foot main. Hull construction is foam cored vinylester resin laminate.

This is a serious cat for serious speed-minded sailors.