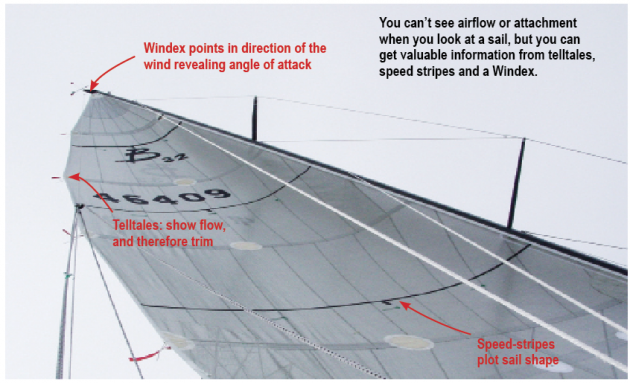 Here's an odd fact: A moving car is going the wrong way at the wrong speed most of the time. Think about it; if you take your hands off the wheel or your foot off the gas even for a few seconds, you'll soon drive off the road or be hit from behind. So we make constant adjustments. Even on a straight, smooth road, we nudge the wheel left or right, or tap or ease off the accelerator, every second of every trip.

Sailors make macro adjustments like changing sails or reefing when conditions warrant. However, these mega moves happen about as often as one might change from forward to reverse in a car, sometimes once or twice during a trip, rarely more. More often, sailors are shifting gears as if driving a manual transmission car, powering up or down to get into the right gear,and making constant fine adjustments to find the groove.

Most of the trimmer's work is to position a clew in space using the sheets, halyard, jib track, traveler, cunningham, outhaul and vang. He or she moves it inboard or outboard with a sheet or the traveler; aft or forward with an outhaul or a jib fairlead.; and up or down with a sheet or a vang. But why?

Sail trim is the control of a sailboat's available power and effort to maximize efficient use of that energy in a constantly changing environment. Wind velocity and angle are natural moving targets. A sailboat's apparent wind angle is also always shifting, moving forward when accelerating and backward when slowing. Continually adapting to these changes, trimmers seek a kind of top-speed, highest-angle nirvana where the boat heels to its designed lines so that the keel and rudder foils and steers without dragging and the sails are generating as much lift as possible with the least amount of drag. How do we know we're doing it right? Heel and speed are something everyone sees and feels. Neutral helm is something the driver reports. Ideal lift and drag come with what foil engineers call attachment. Trimmers find attachment first by adjusting angles. They keep it by adjusting shape.

Attachment is a condition of foiling where air is flowing uninterrupted on both the windward and leeward sides of the sail. When a sail slices wind into two paths, it creates high pressure on its windward side, and low pressure on the leeward (or back) side of the sail. The flow on the leeward side accelerates to bend and meet its counterpart, and the energy created is called lifting force, which countered by the keel, drives the boat forward. Interrupting this flow on either side of the sail creates inefficiency and loss of power. Luffing means that flow on the leeward side of a sail is interrupted. Stalling, often felt as extreme heel and decreased speed, means that flow on the windward side of a sail is interrupted.

Telltales on both sides of a sail and along its leach stream back, signaling that air is flowing and attached. For example, trimmers know that a sagging leeward telltale signals that either the driver can point higher or that the sail should be eased slightly. The telltale is actually indicating that leeward flow is unattached-twisting, curling and eddying-wasting energy better used to sail fast upwind. Imagine a smoke machine placed just in front of your boat. In this situation, the leeward smoke stream would look more like breaking waves on a beach than a smooth line. With the right adjustment, two lines would reattach, reestablishing lift and the boat would go faster and higher.

Angle of attack is the idea that the first 10% or 15% of a sail-its forward-most panels or a foot or two aft from the luff -have been oriented to the apparent wind. Again, luffing or stalling would say things are way off.

Shape is the idea that a sail has camber or depth, but not too much or too little to hit target speeds. Camber is the concave, curved shape seen in the sail, and is the reason that lift can be achieved in the first place. Draft is the location of the deepest part of the curve. Together, camber and draft are what cause air to bend and flow attached to the foil. The trimmer adjusts camber and depth to (1) maintain attachment and flow, and (2) increase or decrease power in puffs and lulls. For the latter, the rule of thumb is simple: flatten the sail, perhaps with an outhaul or backstay, when the boat is overpowered, and deepen it when power is required up to the point of inducing drag.

To judge angle of attack, speed stripes or seams at the luff should be parallel to the Windex or shroud telltales. If they're not, you've not presented an ideal foil to the breeze. Adjust the angle of attack, by sheeting out or in, by increasing or decreasing headstay tension, or by easing or tightening outhaul.

An ideal foil carries a draft that is forward of the middle of the sail. Draft can be pulled forward with halyard tension or the cunningham. If it's too far forward, the halyard or cunningham is too tight.

If the sail is deep and slow or the leach appears closed and the boat overpowered, the sail should be flattened. Adjust shape, perhaps by easing or trimming outhaul, adding vang, backstay, runners or halyard or cunningham.

Finally, foils carry twist from bottom to top to account for sheer; differences in wind angle and velocity from low to high. Twist can both be induced to shed power or reduced to increase power with the vang or sheet. Twist is managed and seen by comparing the telltales and speed stripes along the length of the sail.

These techniques suggest another invisible phenomena: the fun physics of sailing with both a jib and a mainsail. You may have had an experience of setting either a main or a jib for a leisurely sail, and feeling as if the boat was a slug. Adding a second sail undoubtedly caused the boat to spring to life and the sailing was more fun. Why? With a jib boosting apparent wind speed and angle for the main, which can be sheeted in tighter, a sailboat not only sails faster, it sails measurably higher and more comfortably.

Of course, sailing with both a jib and a main doubles the trimming work. Trimmers and the driver must talk about the interaction between sails and the impact of the sails on each other. For example, an over-sheeted or too-deep jib will backwind a mainsail, negating the benefits of having two sails up in the first place.

A discussion of upwind sail trim isn't complete without mentioning the go-to control for coarse and continuous adjustment: the adjustable backstay. Backstay, or some combination of backstay and runners and checkstays (if you have them), provides a one-pull opportunity to do many things at once. First, an overpowered, over-heeled, slow boat sheds power fast, stands up, and goes faster when tightening backstay to increase angle of attack and flatten the shape of the mainsail. But backstay also controls headstay sag which impacts jib shape and angle. So the backstay controls both sails. When racing, our trimmers go to backstay first. They'll play it continuously on an upwind leg, before making adjustments to traveller or sheets. When things are working well, we play puffs and lifts with very little disruption, using only one control.

Of course, like learning to drive, the best way to study and get good at sail trim is to do it. The more time spent on the water looking up and trying these techniques, the more instinctive and natural they will become. Eventually, tiny adjustments will happen as if on autopilot. However, if you have an iPad, I suggest the fun and almost free App call WindTunnel Pro. With it, you can create and test foil performance in a simulated wind tunnel, complete with smoke, pressures, speeds, attachment and calculated lift (good) and drag (bad) based on the angles and shapes you draw in a virtual breeze. You can create deep, powerful foils with lots of lift but also lots of drag, or refined, flatter foils with less lift and almost no drag. You can see how angle of attack initiates attachment.

I recommend that you draw a well-attached jib and add a mainsail. You'll confirm that two sails create more lift without sacrificing drag and you'll be able to see why that sluggish boat was able to point higher and go faster with both sails working and well trimmed.