Forty years ago Rod Johnstone built a boat in his garage. He did his own design work. It took Rod 17 months to finish the build and in May 1976 Ragtime was launched. That summer of racing saw Ragtime win 15 out of 17 races. People were paying attention to the fast, plain-looking 24-footer and asking “Can you build one for me?”

Rod quit his day job and went to visit boatbuilder Everett Pearson to see if Pearson was interested in building the boats. Rod and his brother Rob would be the sales team. And so J/Boats was born and with it a new focus on the fun of one-design racing in keelboats. One-design racing is big today and led by J/Boats designs, but I think what we see now started with the J/24.

The mid-1970s was a time when the IOR ruled. Two-Tonners, One-Tonners, Three-Quarter-Tonners, Half-Tonners and Quarter-Tonners made classes that raced boat for boat. The Quarter-Tonner, or as we like to call them the “quarter pounder” was usually around 24 feet LOA, fat in the middle and skinny in the ends to conform to the IOR’s method of using girths in the ends to determine sailing length. OK, it’s a bit more complicated than that, but that’s the general idea. The ends, especially the stern, were distorted in order to fit the girths closer together, indicating a shorter sailing length. I did one. It was called Union Jack and it was very fast in its class. But it was a bear to sail off the wind in a breeze, a trait shared by many, but not all IOR boats. The worst one I sailed and probably the most successful in terms of numbers built was the San Juan 24 built by Bob Clark. It was effective on the racecourse but it had a tiny cockpit swept by a tiller and it was perhaps the most uncomfortable boat I have crewed on. The IOR was producing boats that depended on rated speed rather than pure boat speed. But it’s often hard to see where you are going wrong when you are in the thick of it. The IOR fleet had the numbers to show it was the one true way.

Then the J/24 showed up. Rod designed the J/24 while in the middle of the Westlawn correspondence course for yacht design. The idea was to design a boat that could race under a variety of handicap rules including the MORC rule. In 1975 Rod won the MORC National Championship with John Kolius coming in second. Soon J/24s were showing up in mixed fleets and blowing the doors off Quarter-Tonners. Of course they rated higher under the IOR than did the Quarter-Tonners at 18, but the J/24 was far stiffer, faster and more comfortable to sail. The J/24 was about the same size as the Quarter-Tonners, but it had the boat speed of a Half-Tonner. It was not long before one-design fleets were being formed and at the time of my original review 4,300 boats had been sold. At one point it was the biggest one-design keelboat class in the world. Today there are 5,300 boats sailing and 150 active fleets worldwide and 136 fleets in the U.S. 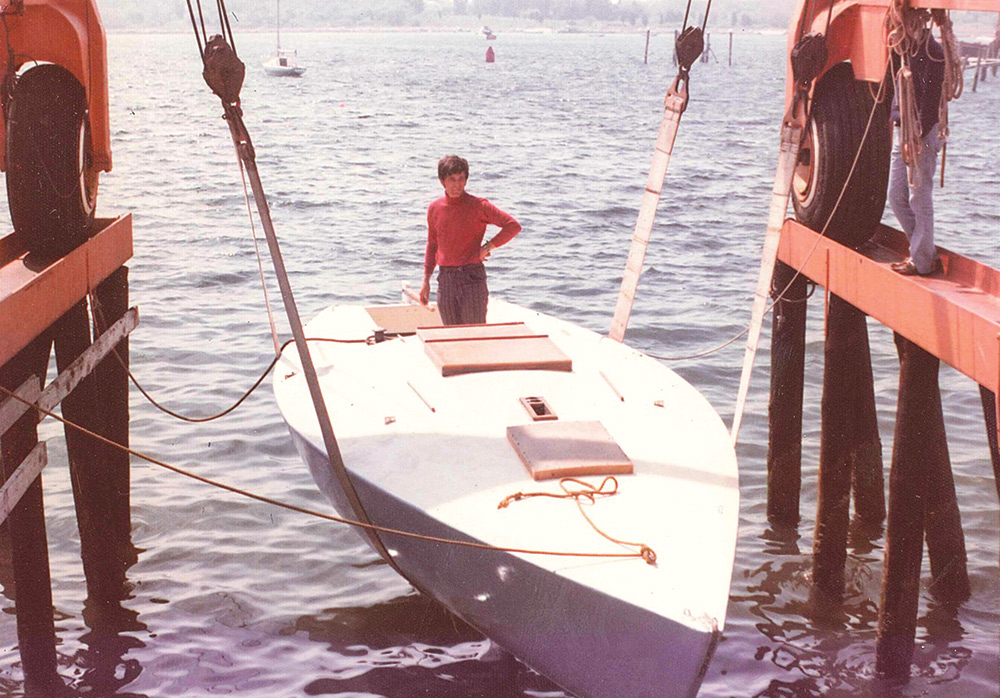 I’d call the J/24 the beginning of the sportboat movement. Compared to a modern Melges 24, the shape is very different. The D/L of the J/24 is 150. That would make it a very heavy sportboat. The J also gives up 4 feet of DWL to LOA. Today the design is dated. But this is offset by the number of boats and the availability of used boats at reasonable prices. The J/24 is a great boat for beginners to learn to race.

There was a time when one-design racing was confined to dinghies and a few esoteric keelboats like the Star Class and the International Rule meter-class boats. Just before the J/24 was introduced, the Ben Seaborn-designed single chine 26-foot Thunderbird became very popular in Seattle and a few other remote places but its popularity was overpowered by the J/24. Something about the J/24 gave it tremendous appeal and when you have lots of boats, one-design racing is the obvious answer.

My pal Jack and I were partners on a J/24 a few years back. The boat’s name was Eddy Haskell, from the “Leave it to Beaver” show. It was a hideous boat. It had an orange hull and a bright blue deck. One weekend it was stolen but the thief brought it back to the slip.

Read Perry's picks for the four most influential designs of the past 50 years here: