Vlad Murnikov and I have been friends for many years. I met Vlad shortly after he set up shop in the U.S. following his 1989 Whitbread Round the World Race adventure on Fazisi, an 82-foot radical offshore racing machine. Vlad does not design “out of the box” because I’m not sure he even knows there is a box. Looking at the newest America’s  Cup monohulls I can see elements of design that Vlad was proposing five years ago. So when Vlad sent me these images and said, “I have put my whole heart and soul into this design,” I quickly paid attention.

Obviously this is not a boat for everyone. The estimated cost is $12 million so that would eliminate me as a buyer. But we live in a world where technology is venerated by many and I can think of some people who would be very attracted to this vessel. I suppose you could call it a “cruising cat” but that may depend on your definition of “cruising.” I just look at the drawings and think of it as an amazing big catamaran. 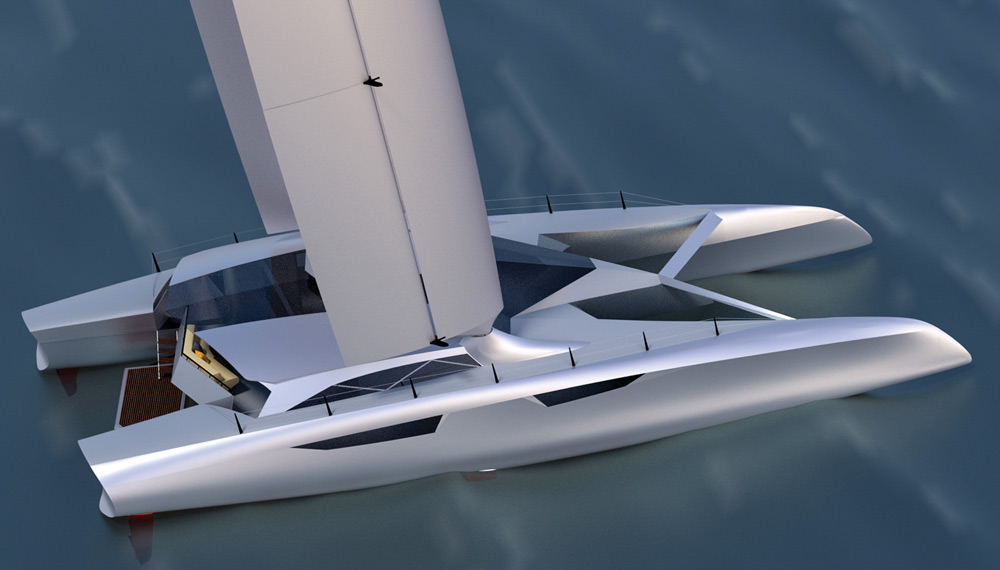 As cats go this one is not very beamy. The L/B for the whole boat is only 2.7. But the L/B for an individual hull is 11. In the monohull world an L/B of 4 is considered very narrow. The bows are the wave-piercing type with a little flare at the deck edge to throw the spray aside. The D/L using the full displacement is 32.8666. I like that “666” part and I think this is the lowest D/L we have ever calculated here. With hulls this skinny and a D/L that low, I can’t even imagine what speeds you would get out of this boat but I’d consider 20 knots “loafing along.”

Curved foils are used to develop lift to reduce displacement and provide resistance to leeway. Fully deployed, the foils are capable of reducing the total displacement by 75%. But this is not a fully foiling hull. At max foil lift there would still be some hull left in the water. This will reduce the chance of pitchpoling. My wife really hates it when we are sailing along and all of a sudden we pitchpole. “You do that one more time!”  The trunks for the foils are designed to allow adjustment of the foil to optimize the angle of incidence for either upwind or down. There is a very slight bulge in the hull sides to allow for this.

The client for this design did not want accommodations for a crowd. (My kind of guy.) There are staterooms for two couples with the owner’s stateroom taking up the entire port hull. There is both shower stall and bathtub in the port hull. To starboard there is another stateroom with adjoining head and shower. Forward of this there are accommodations for four crew with another head and shower.

The saloon is huge! The galley is huge! You could dance a wild Mazurka in there. But the exciting part of the saloon is the double step-up command center. There are seats for observers and a pilot chair at an array of electronic nav and control gear that makes this look more like the cockpit of an airplane than a helm position on a boat. This is the only steering station although Vlad says he could work in a cockpit steering station on your boat if you like. The aft deck is an extension of the saloon and it is covered for sun and rain protection. You step down from this deck to a broad and deep boarding area.

The rig is two independent, two-part wing sails on unstayed rotating masts. There are several advantages to having twin masts. It gets the center of pressure down to reduce the heeling moment. It is a lighter rig than one, big single unstayed mast. The masts are stepped on each hull rather than on a connecting beam. This reduces the loads on the beam considerably and again reduces weight. The two-part wing sail features a rigid forward section and an aft section that can be lowered or reefed. Each sail will have independent controls. I wonder what life at the dock or the hook is like with masts like this. I don’t have that experience. I like doing 20 knots but not while anchored. I’m not sure SA/D as we calculate it is even relevant to this design but using the standard formula the SA/D is  35.54. With a number like that there will be no “light-air performance.” This boat will create its own apparent wind. 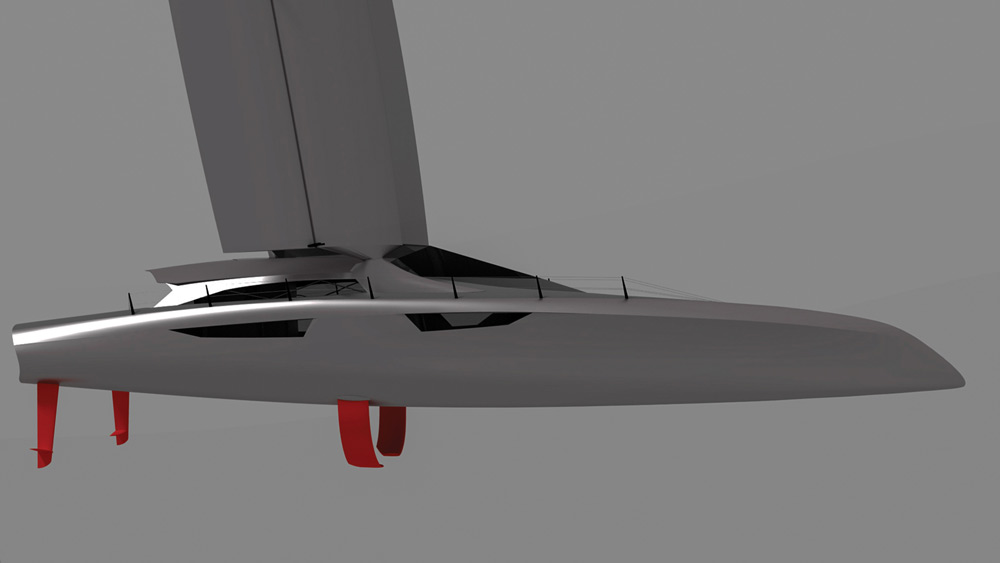 I don’t know what to say about the styling. Vlad likes low windage shapes. He has done just about everything in terms of shaping this structure to reduce windage. In a word it’s “sleek.” But it’s more than that. It’s also “playful.” It’s a good example of Vlad’s flare with the art of the design process.

Construction would be all carbon fiber infused over a foam core. Using pre-preg carbon (carbon fiber combined with heat activated epoxy) would further reduce weight but add very considerably to the build cost and complexity.

I can’t wait to see photos of this boat under sail.

Our best estimate of the sailaway price:  $12 million