How low tech carried SAILING into a high tech world

This magazine has reached another milestone, or waypoint if you wish, and that requires a genuflection at the altar of technology.

Technology has taken SAILING to the point where, on its 55th anniversary, it can be read on your phone or tablet with nifty added features that let you watch sailing videos and visit advertisers’ websites with a tap on the screen, and its gorgeous sailing photographs can be viewed on your computer in pixel-perfect images as big as the screen will allow.

Well, that is just terrific, but SAILING owes its existence to technology in a much different form.

In 1940, a young man who felt his master’s degree in English was going to waste in his job as an advertising copy writer returned to his hometown determined to start a weekly newspaper.

The town, a freshwater seaport with fewer than 5,000 residents, already had two newspapers, but the man was convinced that the publication he dreamed of would be so radically different from the newspapers of the day that competition wouldn’t matter—because his newspaper would be printed by a process called photo-offset. 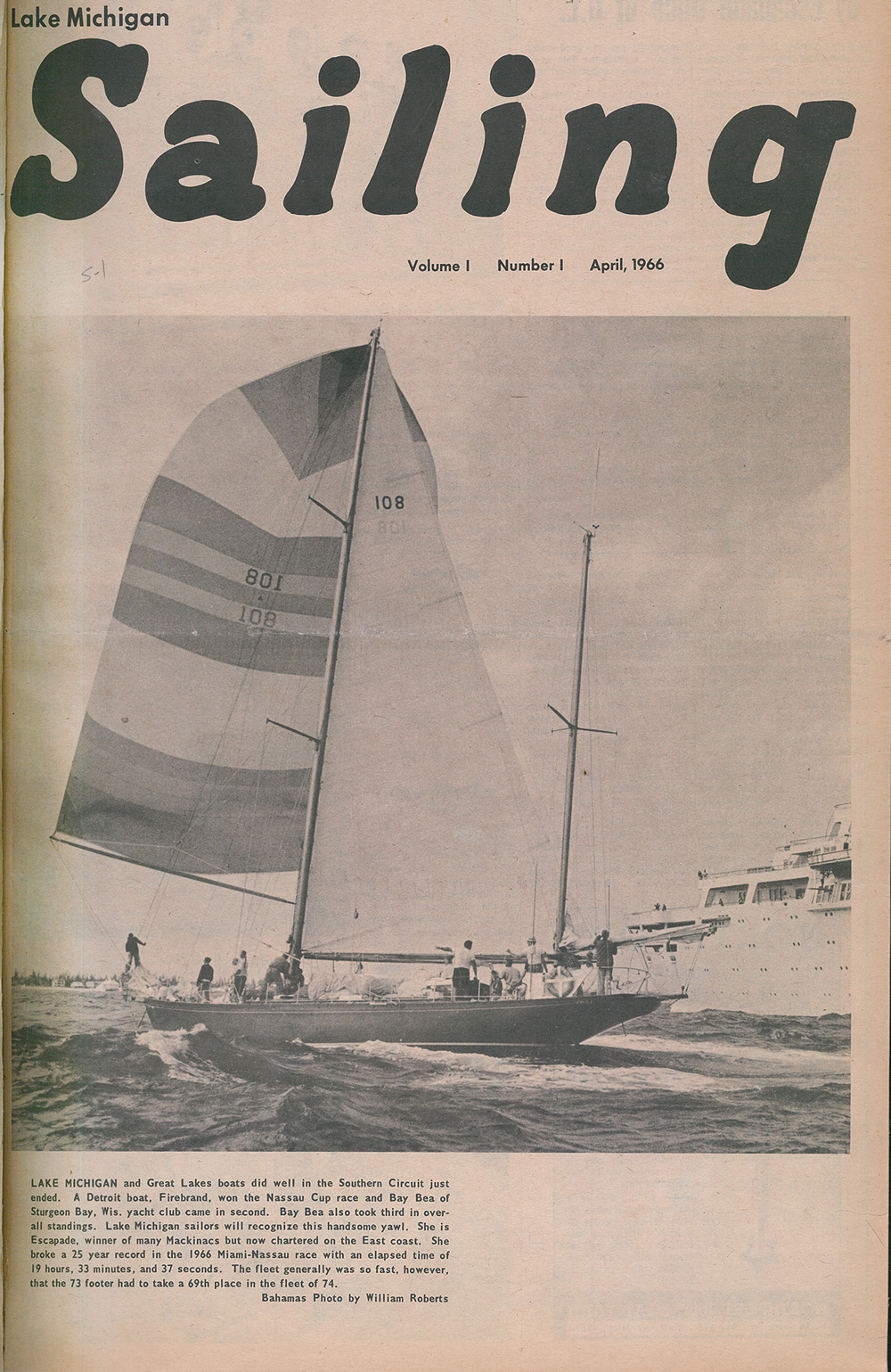 All newspapers then were printed by the letterpress method, with words impressed on paper by lead type and photos reproduced by metal engravings, resulting in a mass of gray matter on newsprint. In literally sharp contrast, offset produced clear black printing and photos that, unlike the grainy gray engravings of letterpress, were crisp black and white reproductions that nearly matched the quality of the original photographic prints.

The man’s dream became reality as the first offset-printed newspaper in America, decades ahead of the time when almost every newspaper would be printed that way.

Readers were drawn to the pictures of their family, friends and neighbors and the community’s news events. Compelling photography printed big and clear, along with aggressive local news reporting, became the newspaper’s signature.

The newspaper thrived, and so did the publisher’s passion for sailing. Starting with a self-built sailing dinghy, he owned a succession of small one-design sailboats, crewed on offshore boats in long-distance races and, by 1966, owned a handsome Phil Rhodes-designed yawl that was one of the first production-built fiberglass cruiser-racers.

Twenty-six years after his community weekly was born, he started another newspaper. It had the same tabloid format and the same offset printing on newsprint and the same emphasis on bold display of photographs, but its subject matter was a far cry from news of small-town happenings. The man named his new publication SAILING.

The focus of the written content was mainly the Great Lakes, but the photos spanned the larger world of sailing. The enthusiastic response to the first issue, distributed free at marinas and chandleries, made it clear this was what many sailors were waiting for.

Paid subscriptions, along with ads, articles and photography about sailing beyond Midwest waters and photo submissions of splendid quality by gifted photographers attracted by the prominence SAILING gave their work followed, hastening the publication’s evolution.

SAILING became a magazine, saddle stitched and trimmed like a magazine, but still a 10 by 16-inch tabloid. Readers often referred to it as “the big one.”

It started getting big in other ways too. Issues grew to more than 100 pages. For several days each month a crew of temporary workers recruited from the small town assembled to help the print shop’s regular workforce feed printed sections into a 30-foot-long binding machine that rumbled like a freight train as it turned out thousands of completed magazines to be labeled and mailed.

The man in this story was Bill Schanen Jr., my father.

Marvelous technology that makes it possible for these words and those of our stellar writers and columnists and the beautiful work of our corps of contributing photographers to be read and viewed on brilliant color pages now produced in a high-tech magazine manufacturing plant and on the panoply of electronic media accounts for much of the magazine’s vitality at age 55. But SAILING would not be here were it not for a technology that was ancient when its founder reinvented it 81 years ago.

Of course, SAILING is also here because of its faithful readers. We occasionally hear from a subscriber, or descendents of a subscriber, who was so devoted to the magazine that every issue was saved, including the first one that came off that newspaper printing press in April 1966.

And every once in a while someone will still call SAILING “the big one.”