After 50 years and hundreds of designs, Bob Perry revisits one of his classics and redesigns it for the modern era 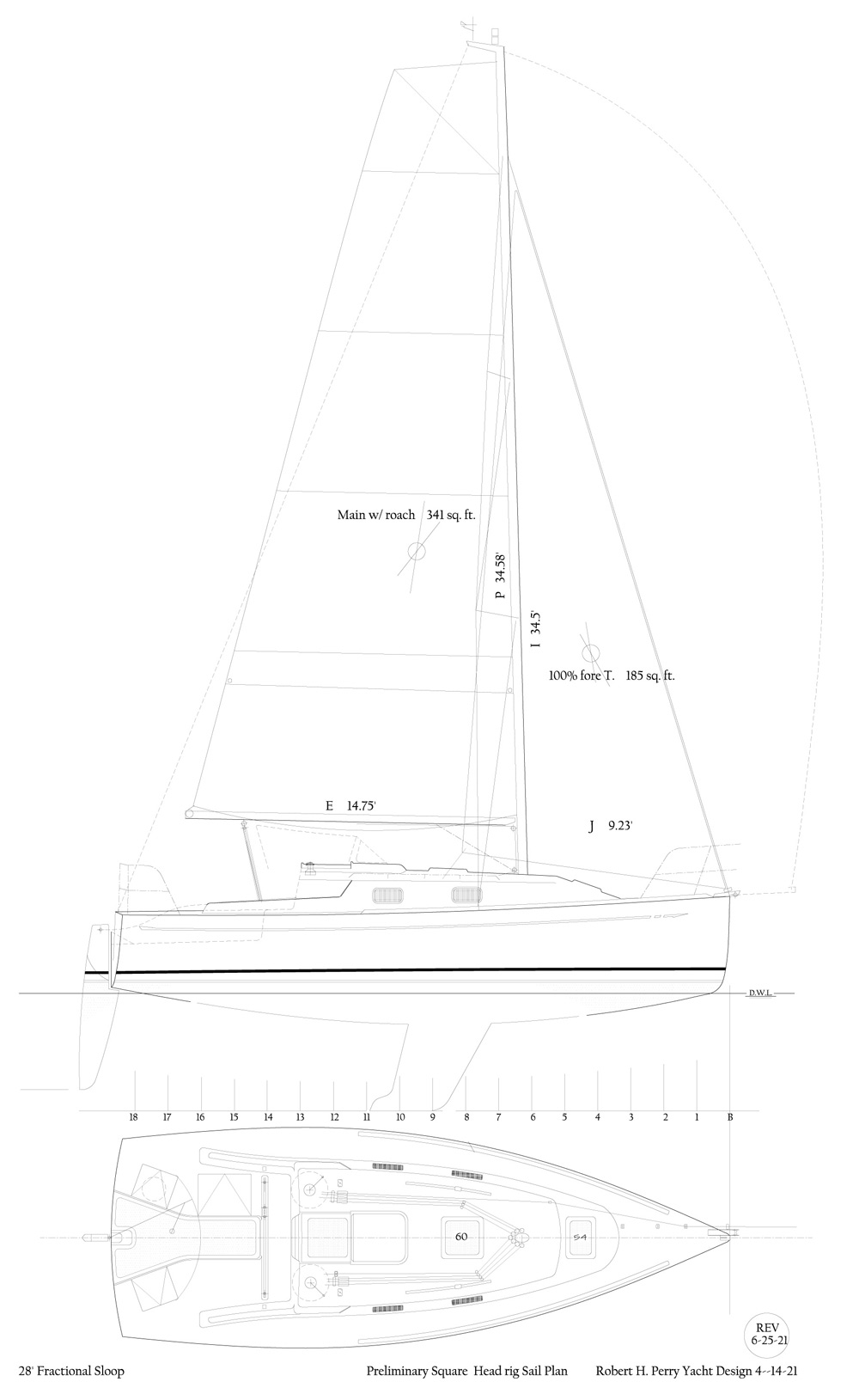 Islander really only had one requirement for the 28. It had to have a 10-foot beam. That’s a lot of beam for a 28-footer with a “fat” L/B of 2.8. The rest they left to me. Yves-Marie had been working on a project of his own, a quarter-tonner. It was fat. (The beam at the transom of the new 28 is 2.57 times the beam of the I-28— a big change.) The midsection shape Yves-Marie used caught my eye. It was not the typically popular IOR tumblehome section. It was very flared and dish shaped with a narrow BWL. I liked it and thought I’d use a similar midsection for the I-28. While IOR was ruling the racing scene I decided not to wrap the new 28’s hull design around the measurement points, i.e. “connect the dots.” I took a softer approach to the IOR. I did not ignore  IOR but the rule did not dictate the boat’s shape.  The rig is very typical of IOR rule boats in the early 1970s with a big fore triangle and a smallish mainsail while not going to the IOR minimum main aka the “ribbon main.”

For a layout I aimed the interior at what would work for a small family. The head would be enclosed. Islander had a very slick way of handling the dining table that allowed the table to fold up against the bulkhead and disappear. It was a simple layout but it worked very well and, more than anything else, may have been responsible for the popularity of the boat. The new 28 was a true racer-cruiser.

For aesthetics I just followed my nose and gave the boat moderate proportions, moderate freeboard, moderate overhangs and a simple but svelte shape to the cabintrunk. The very first time I saw the finished I-28, hull No. 1, I was amazed at how good the boat looked. It was for me a confidence builder, i.e. “Gee, you really do know how to do this.” Then I sailed the boat and realized I had designed a very nice, well-balanced sailing boat. I still admire the looks of that early design.

Now, 48 years later, with a new client looking for a boatbuilding project it occurred to me that maybe we needed an updated version of the old I-28. It would be a boat that takes advantage of what we have learned over all those years. It would be a fast and comfortable roomy family cruiser-racer. The first thing I did was to go back and study the I-28 drawings, looking for keys to what made that boat successful. With the IOR ancient history I removed the overhangs to gain DWL and increase hull speed. I kept the beam at 10 feet but removed the slight IOR shape of the midsection. It has a more rounded midsection. I chose an outboard rudder, although the jury may still be out on that feature and we may offer both outboard and inboard rudder versions. I like outboard rudders. 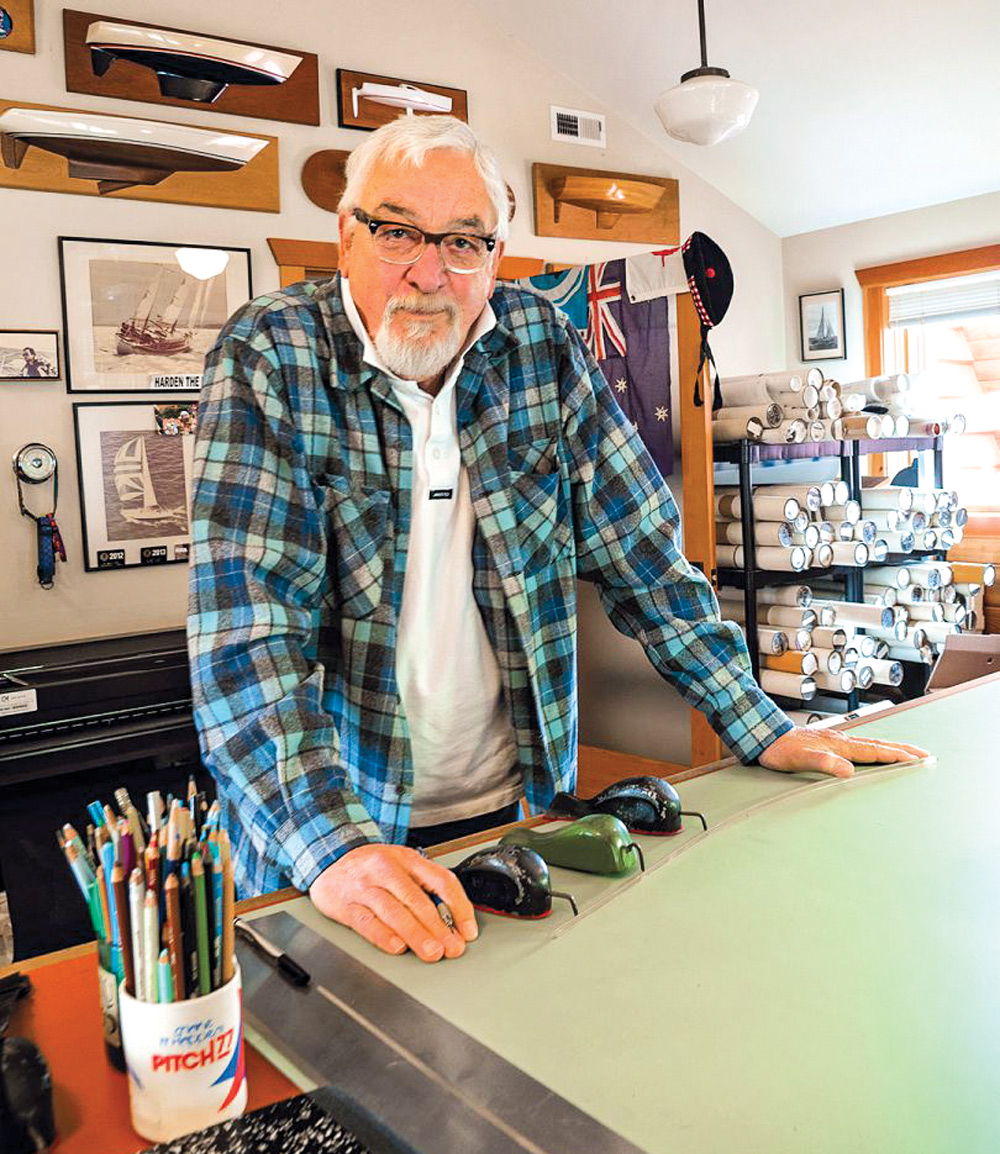 I used a modern fractional rig with swept spreaders and chainplates on the hull. This is a huge advantage over the old IOR proportioned rig with inline spreaders and inboard chainplates. With swept spreaders we can eliminate the standing backstay and use running backs when a masthead chute is flown. The small foretriangle means there will be no 150% genoas to struggle to tack and off-the-wind sails will be asymmetrical sails flown off an optional, deck mounted retractable sprit. The new 28 will be faster and easier to sail.

I did my best to almost replicate the I-28’s interior. The challenge was to work with the mast location that is farther forward with the fractional rig. I think it will work fine. The longer DWL of the new 28 gave me a bit more usable volume to work with while not increasing the displacement and in fact the new 28 is lighter than the old 28 with a higher SA/D.

I made the deck more in line with what I think works best for racing and cruising and I brought all the lines aft on the cabintrunk to clean up the deck. By eliminating the wraparound cockpit coaming of the old 28, I gained sitting area and a far more comfortable helming position. I left the transom open for easy boarding, something unheard of in 1973.

Lots of details remain to be resolved. I am very lucky to be working with my old intern and University of Southampton graduate, Will Porter on this project. I’m 75 and I need help with the heavy lifting of the design process. Will is very capable, a great sailor and fun to work with. The 3D work you see here is all Will’s work. Will keeps me honest and entertained.

Hope you have enjoyed this almost 50 year trip through my design career. I have had a wonderful time immersed in my boyhood dream.

“See Dad, I didn’t turn out just like Uncle Mick.” 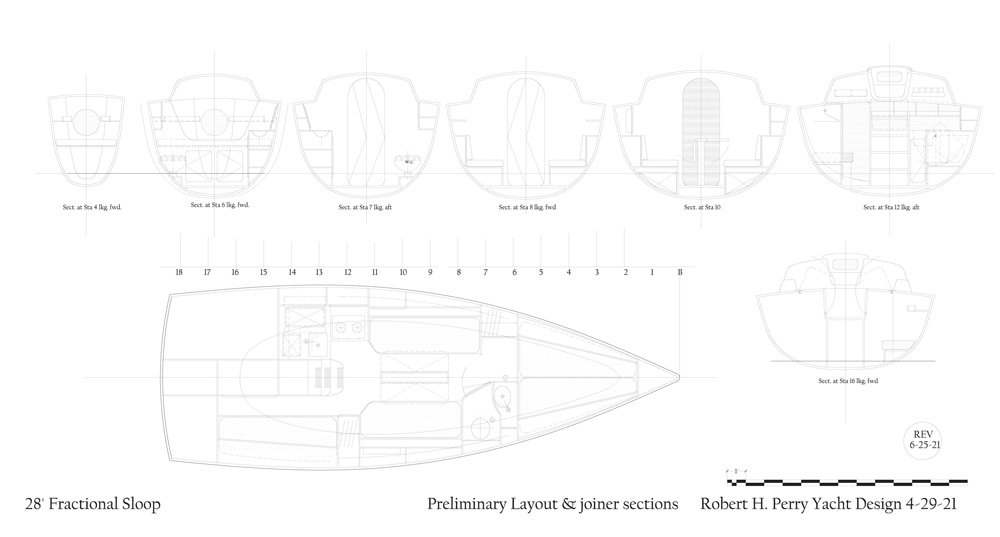