This stylish new Beneteau can be racy or cruisy

I think it’s fair to call the Beneteau First series the Beneteau “premier” line. These boats have a very good reputation for speed on the race course and the durability required to be raced hard. The new 44 is designed to fit in between the company’s subsequent First 36 and First 53 models. The hull, appendages and rig design, call it the “naval architecture” was done by Roberto Bisconti. The interior and deck design work was done by Lorenzo Argento. 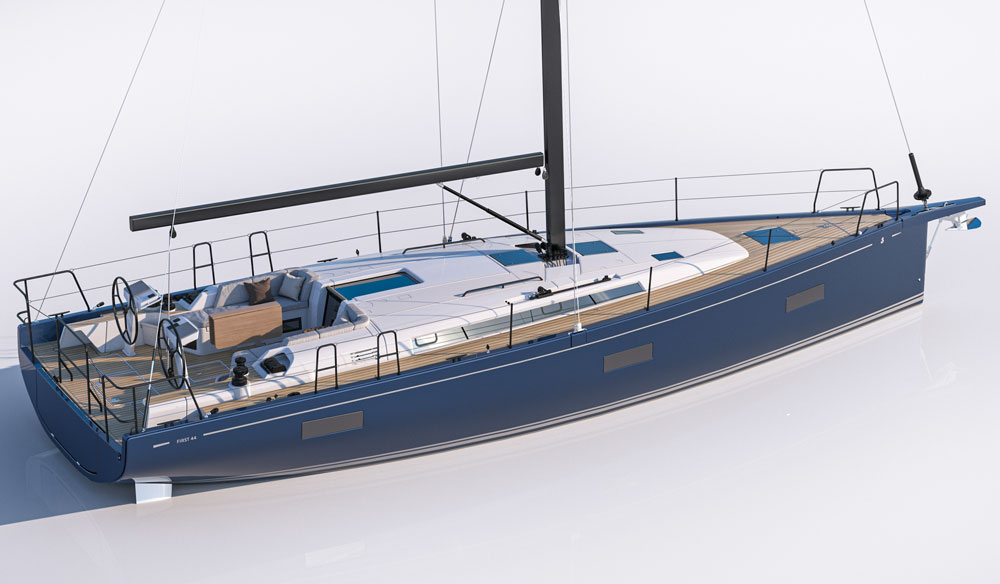 The challenge in designing a successful racer-cruiser is to deal with the contradictions inherent when you try to satisfy both styles. Obviously the best cruising boat will not be the best racing boat and vice versa. How do you balance that compromise? When it is done with skill you should never notice any compromise. To that end I find this design very well thought out. There are two deck layouts, two rigs and two keels. There is even an option for 80-gallon water ballast tanks port and starboard. If there is a compromise it is that both models share the same interior layout. This may not be seen as a compromise by the racing crew once the race is over.

I’ll use the numbers for the “performance” version for my ratios. The cruising version is 1,103 pounds heavier with 662 pounds  more ballast. This rewards the cruiser with a bit more stability to compensate for the 13 inches less draft. The displacement difference will change the DWL measurement but I don’t have those numbers. I’ll just use the LOA of the hull for the DWL. That will be very close given the truncated ends on this design.

The D/L is 120 and the L/B is 3.1. Notice that the plan view shows a deck planform with as close to zero taper aft as I can measure. We have been moving this direction for the past few years. Now, beam at the transom is the same as beam max. Remember back 47 years to the “pintail” sterns of the IOR racers? 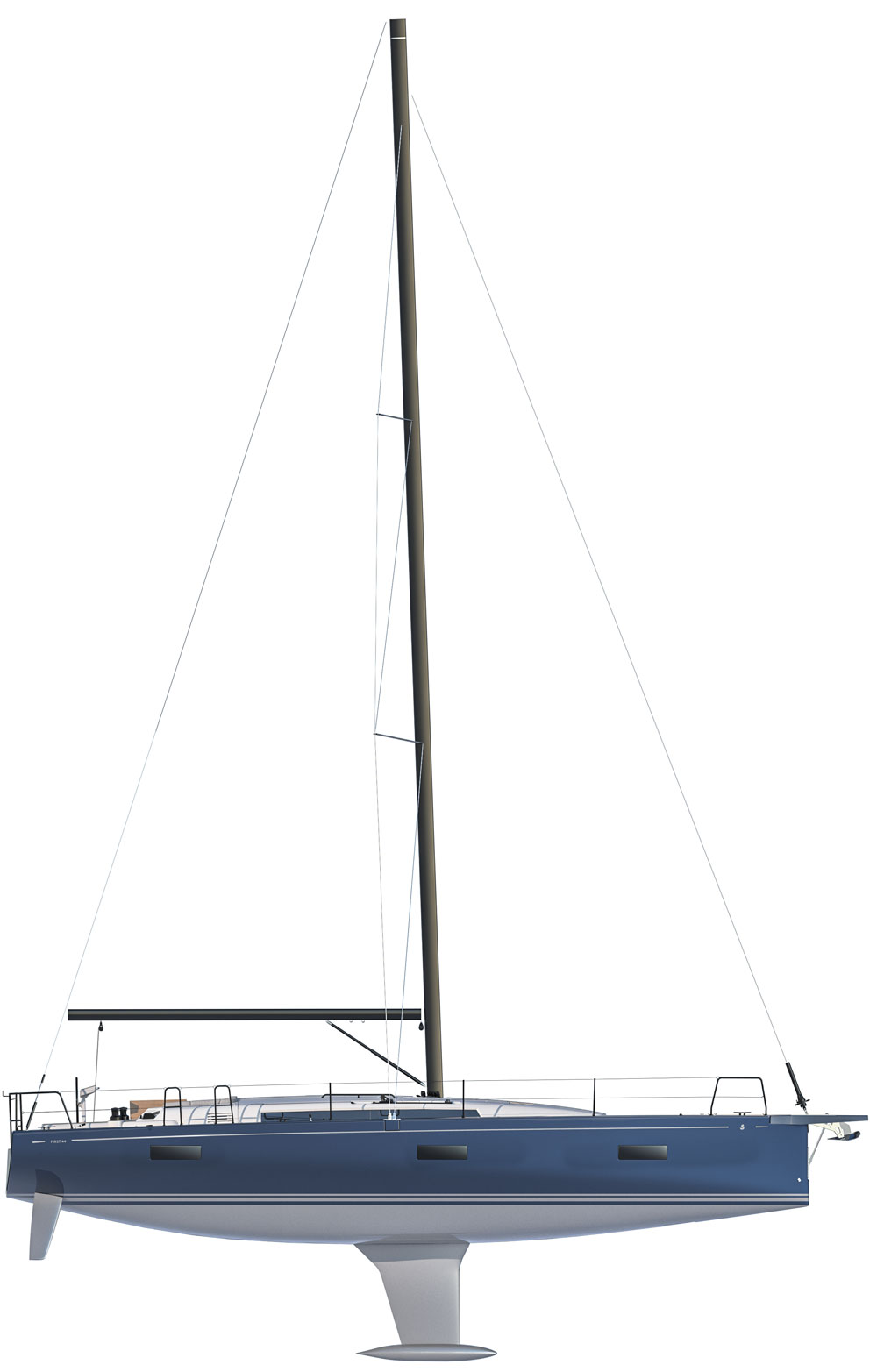 The 44 has twin rudders that appear to be splayed out at about 36 degrees. The sectional shape aft is a gentle arc fairing up to a firm turn to the bilge. This has all the benefits of a chine aft without having an actual sharp corner. Draft for the performance version is 8 feet 2 inches with a lead-and-iron T-configuration keel. Draft for the cruising version is 7 feet 1 inch with an iron T-keel of slightly less aspect ratio of that of the Performance version.

When the naval architect Bisconti is done having all the fun with the hull design the boat is turned over to the interior designer, Argento, for the hard part, i.e working around the features fixed by the naval architect. What do I mean? I mean the interior design is now controlled to a great degree by where the mast goes. Mr. Argento does not have the luxury of moving the mast 6 inches either way. This puts the mast right in the middle of the main cabin just like my old Valiant 40. It would be far more convenient to put it up close to that forward bulkhead but nooooo.

The layout is designed for three couples with mirror-image quarter cabins with large double berths (thank you broad stern). There is a head with shower stall aft to starboard. On the port side the galley is adjacent to the companionway. I’m not wild about having a sink with no counter space on either side of it. I would avoid that design feature. But I do like the wide open counter space forward. There is plenty of counter there to make a very nice smoked salmon salad.

The aft-facing nav station to starboard is a small desk area not big enough for a paper chart. But heck, who uses paper charts today besides me? There is plenty of chart table (can we still call it that?) for your laptop or mobile device. (Mobile device table does not sound right.)

The dinette to port will seat four. If you have a full crew of six the other two can do a “second seating” meal. Forward there is the owner’s cabin with adjoining head but no shower stall. I like the way the berth can be accessed from both sides. The rendered layout shows a different shaped berth than does the promotional drawing. Maybe it’s a work in progress.

This is a beautifully styled boat with deep bulwarks molded in for security. The cruising deck has all lines brought aft. The performance version has lines led to winches adjacent to the companionway. The performance version has minimal steering pedestals port and starboard with the broad mainsheet traveler on the cockpit sole. The secondary winch is mounted on the coaming forward. The cruising version has more bulky or elaborate steering pedestals and what looks like a single-point mainsheet, which I imagine is lead aft to the bank of clutches, possibly on both sides. With jib lead tracks on top of the cabintrunk the side decks are
perfectly clean.

Cruising version or performance version, this design will deliver both speed and comfort and do it in a very stylish package.