Home . Articles . Columns & Blogs . Full and By . It's scary when the whales and sailboats meet, but the photos are terrific

It's scary when the whales and sailboats meet, but the photos are terrific

It's the most talked-about picture SAILING has ever published. That's saying a lot, because we have been on a mission for the past 44 years to find the best sailing photographs in the world to be reproduced on the pages of this magazine. In the more than 500 issues we've published, there are thousands of sailing photos, which include many that are extraordinary and a few that rise to the level of works of art. These are images that can enthrall you, thrill you, make you wish you were on the boat in the picture or scare the pants off of you. The best of them capture the complex dynamic of water, wind, sky, light, boat and sails in a way that validates this magazine's motto-The Beauty of Sail. Beyond that, almost all of them, whether shot on Kodak Plus-X or Tri-X black and white film (in SAILING's early years), the color transparency films Fujichrome Velvia or Kodachrome 64 (the latter, now no longer made, was our favorite for reproduction in pre-digital days) or with today's fabulous digital cameras, are technically excellent. 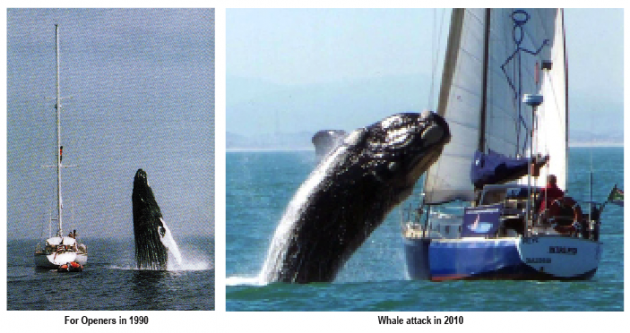 Almost none of that, except the part about enthralling, thrilling or scaring you, applies to the picture that has inspired more comment from our readers than any other. There is a sailboat in the photo, but it's under engine power, towing an inflatable dinghy, with no sails set and a person standing on a spreader. The picture was not taken by one of the consummate professional marine photographers who contribute to SAILING, but by an 11-year-old boy using a cheap "one-touch" film camera. It's the picture on this page of a whale rising out of the water nearly parallel to the boat's mast.

The boy, Peter Graves, was cruising with his father off the Massachusetts coast near Stellwagen Bank just outside of Cape Cod Bay when several humpback whales appeared. While his father tried to get his video camera going, Peter grabbed the snapshot camera and clicked the shutter just as one of the cetaceans breached beside a boat ahead.

The photo was published on the For Openers page in the August 1990 issue and caused quite a stir at the time. Twenty years later, we're still hearing about it. Every so often a reader will ask if a copy of the page or the photo is available (not without considerable difficulty and expense). I've been asked about it at boat shows, at America's Cup races in New Zealand and on a Caribbean island. A reader from Australia told me it was "the most extraordinary photo I've ever seen in a sailing magazine."

I wouldn't go that far, but I would say it is the best published whale-and-sailboat photo. Or was. Now there is a new contender for the title-the amazing picture of a whale leaping out of the water to clobber a sailboat. I wish I could say it was published here first, but this, unlike the era when the For Openers picture was published, is the Internet age, and this image, as they say in the often silly jargon of the Internet, "went viral," meaning it was passed from a lot of people to a lot of people (like an infection-get it?). It was also seen by millions of network television viewers.

The story behind this astonishing image, which is taken from a video, is that a southern right whale swimming in the Atlantic Ocean near Cape Town, South Africa, leaped out of the water and crashed on a sailboat, dismasting the boat and damaging deck structures. The couple aboard the boat survived without serious injury. The whale, at an estimated weight of 40 to 50 tons, quite a bit bigger than the boat, reportedly left some flesh or blubber on board, but was able to swim away and in one of the video images makes a graceful underwater exit with a flip of its shapely tail.

The owner, Palermo Werner, was quoted as saying he spotted the whale about 100 meters away and "I assumed it would swim underneath the boat, but instead it sprang out of the sea. Luckily our yacht is steel."

I mentioned sailing photos that can scare the pants off of you. This one certainly qualifies.

Our 20-year-old For Openers shot may have been trumped, but it's still a classic.