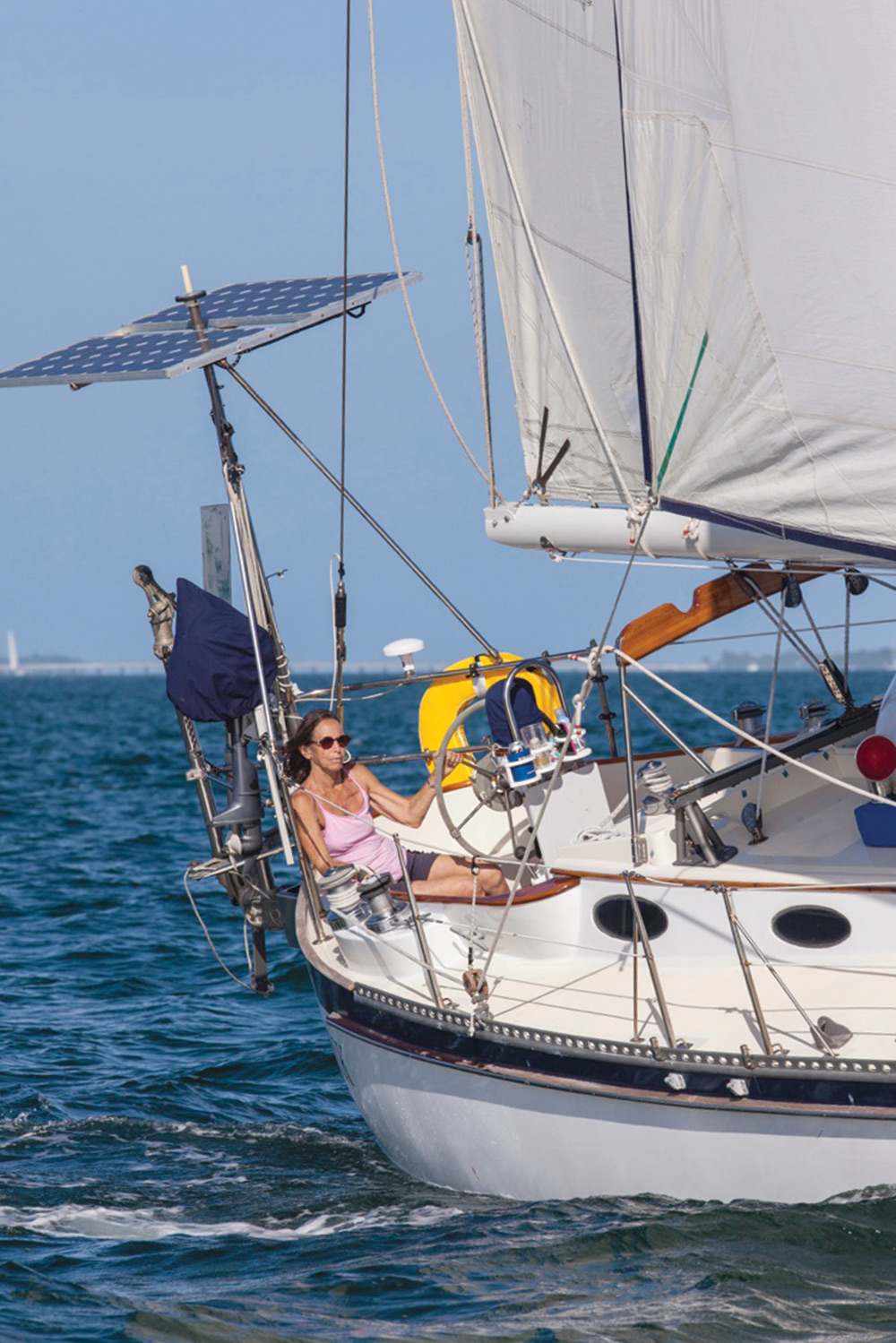 Solar panels can free you from having to run the engine to charge the batteries.
Billy Black
Going offshore is all about unplugging, so it’s somewhat ironic that sailing offshore requires keeping a sharp eye on energy usage. Maximizing battery system capacity and minimizing charging time is what offshore efficiency is all about. That requires minimizing charging time, controlling energy consumption and investing in alternative charging equipment.

Think of onboard energy management like managing a financial budget. Batteries are like a bank account, where monetary expenditures correspond to the draw of electrical devices on the batteries, and income is the amount of electricity generated by the charging system. If the expenditures are greater than income, expenditures must be reduced, income must be increased or both.

At sea, a typical 45-foot cruising boat consumes about 150 amp-hours per day. Good battery-bank design allows a for a electrical capacity that is three times the average daily consumption plus a 20% factor to allow for battery aging, dictating a bank capacity of 540 amp-hours.

Alternators are only about 60% efficient due to battery-charge rates and the engine rpm. A 100-amp alternator, a typical size for a 45-footer, takes about two and a half hours to charge back that 150 amp-hour consumption. Some boats have more space than others for mounting solar panels. This boat has a good amount of space on the cabinhouse, but consider the top of a bimini or on the dinghy davits as other options
Billy Black
A couple hours a day is longer than anyone wants to charge, but the alternative is to reduce electrical consumption or add an alternative charger like a solar panel or wind generator. Sailors have come to depend upon electronics, so the best option is to generate more electricity without running the engine.

Solar power is my favorite alternative energy source. It’s clean and plentiful in most places, but solar systems can be expensive. However, the initial cost of buying and installing a solar charging system is deceiving. It’s actually so affordable that it really should be considered a necessity for any offshore boat.

The typical 45-foot sailboat has a 75-horsepower diesel engine that, with proper maintenance, should run for 7,500 hours before requiring replacement, to the tune of $22,000. With a useful life of 7,500 hours, the engine costs $2.93 per hour to run before factoring in fuel costs.

Changing engine oil every 200 hours at a cost of about $30 for the oil and filter adds another 15 cents per hour to the engine operation cost. The primary fuel filter and Racor element need service about as frequently, so that’s another 10 cents per hour.

Now we need to add fuel consumption to the cost. At cruising speed, the engine burns about one gallon per hour, but we typically charge at a little slower speed, so it’s safe to estimate fuel consumption at three-quarters of a gallon per hour. The cost of fuel varies greatly: In the United States it is typically around $4 per gallon, but if you are cruising the Med you can expect to pay closer to $10 per gallon. If you split the difference and say the fuel costs $7 per gallon and the engine burns three-quarters of a gallon per hour, this yields a $5.25 per hour cost.

Adding up all the costs per hour means that it costs $8.43 per hour to run the engine, but that doesn’t translate directly into battery charging costs. The key number to compare charging systems is the cost to charge the batteries one kilowatt, and that number depends on the alternator.

A 100-amp alternator sources only about 60 amps of charging current. This is due to the fact that batteries have a limited charge acceptance rate and alternators are often at less than optimum speed. A 60-amp effective alternator charging at 14 volts produces 840 watts (.84 kilowatts) of power. Dividing the $8.43 hourly cost to run the engine by .84 kilowatts means running the engine to charge the batteries costs $10 per kilowatt-hour. For comparison, power companies charge about 12 cents per kilowatt-hour, so boat engines are an expensive way to charge batteries, and the high cost is motivation to look for alternatives. Replace all light bulbs on your boat with LEDs.
Billy Black
Most boats, including the typical 45-footer, have spaces that easily accommodate a solar charging system. Good places to mount solar panels are on top of the bimini and on top of dinghy davits, but you can almost always find a place to squeeze some in. Two 85-watt panels on the davits and two 60-watt panels on top of the bimini make 290 watts. The panels won’t articulate with the sun and they get shaded by sails, so it’s safe to figure a five-hour solar charging day. Based on this, the panels generate 290 watts for five hours for a total of 1,450 watt-hours or 1.45 kilowatt-hours.

The solar panels generate 1.45 kilowatt-hours per day. The engine costs $10 per kilowatt-hour, and at that “going rate” the panels generate $14.50 worth of power every day. In other words, that’s how much money is saved every day using solar panels instead of charging with the engine. A complete solar system with installation costs around $2,000, so the break-even point running the solar system instead of the engine is just over four months ($2,000 ÷ $14.50 = 138 days).

That $2,000 investment in solar equipment will not only pay for itself in less than six months, but you’ll be able to enjoy quiet, engine-free bluewater passages while the sun does the work.