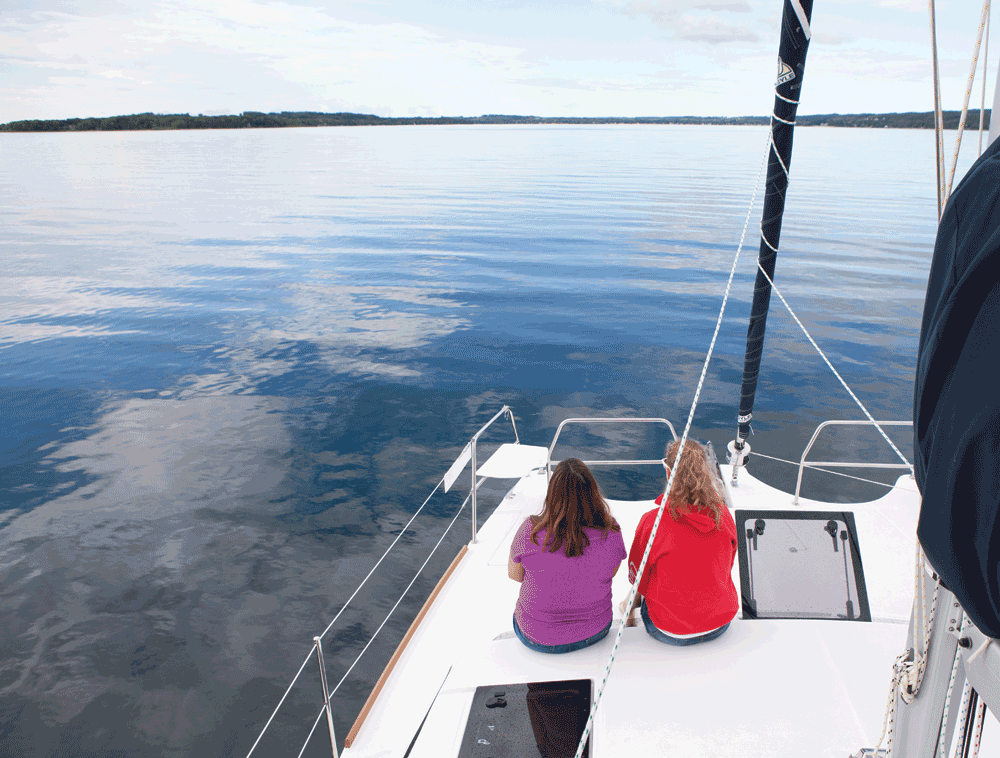 The crew enjoys a relaxing passage across a glassy lake.
Marianne Lee

From the minute we decided to use the cruising cat, it was my goal to push it to its limits. No, I didn’t want to see how fast it could go or if I could actually fly a hull. Rather, I was determined to see how shallow we could anchor. The boat boasts a 32-inch draft, about the depth of an outboard motor on a small rowboat. One of the best things about sailing the Great Lakes is that there isn’t a tide. If the depthsounder says 15 feet, it will be 15 feet six hours later. So in my brain this meant we could go to 3 feet and still have 4 inches to spare.

Our first anchorage, just five miles to the north of Traverse City, was Bower’s Bay, a peaceful little place lined with deep woods and a crescent-shaped beach. I cautiously motored in, watching the depthsounder with a sharp eye. When it read 7 feet I caved. 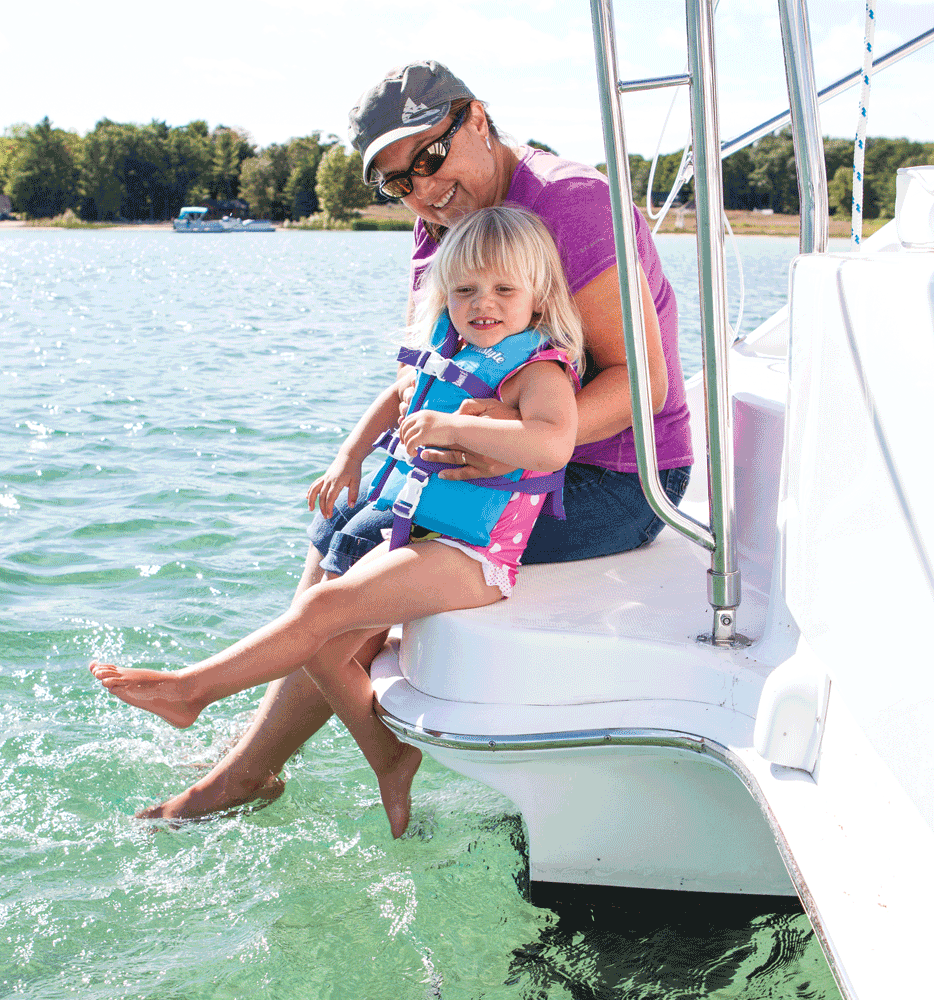 Maddy tickles her toes in fresh water off Old Mission Harbor.
Marianne Lee
“Drop anchor!” I shouted. Basic math told me we were more than fine, but I had flashes of a large towing bill after being dragged off the sand. Add to that, the age-old question every sailor asks of their depthsounder. Does it read from the waterline or the bottom of the keel? I don’t think any sailor really trusts it. After the anchor was set and solid and engines shut down, the swimsuits went on and everyone went overboard. I jumped off the bow. When I hit the water, I let myself sink slowly so I could get a good look at our depth. I honestly can’t remember being in water as clear, so when the bubbles from my entrance disappeared, I could easily see the two hulls floating above the sandy bottom. From that point of view, the hulls looked like an odd alien spacecraft hovering above the ground. There was certainly more than enough room between the keels and the bottom.

My sister and niece didn’t need any coaching when it came to figuring out the relaxing part of cruising. After dinner, they both instinctively busted out paperback novels—Kaitlyn sprawled out on the bow watching the world drift by; Becky sat in the cockpit with a pair of binoculars within reach. Between chapters, Becky watched an eagle in its nest.

The next morning, Becky took a hard look at the water and declared there didn’t seem to be enough wind to sail. But she simply didn’t know about being in the lee of the land. It was going to be a great day for a sail with a solid north wind. We had no real agenda planned but were simply going to sail in whichever direction was easiest. Our only real goal was to be anchored by early afternoon, so we had plenty of time for swimming and exploring Sutton’s Bay was just up the track 16 miles, and even though the sail was upwind, it was going to be relatively easy. Once out of Bower’s, the breeze was solid, and the boat loped along at around 8 knots.

“Not bad speed for upwind,” I thought as I put another check mark in the plus category. And sure enough, right after lunch we arrived at Sutton’s Bay.