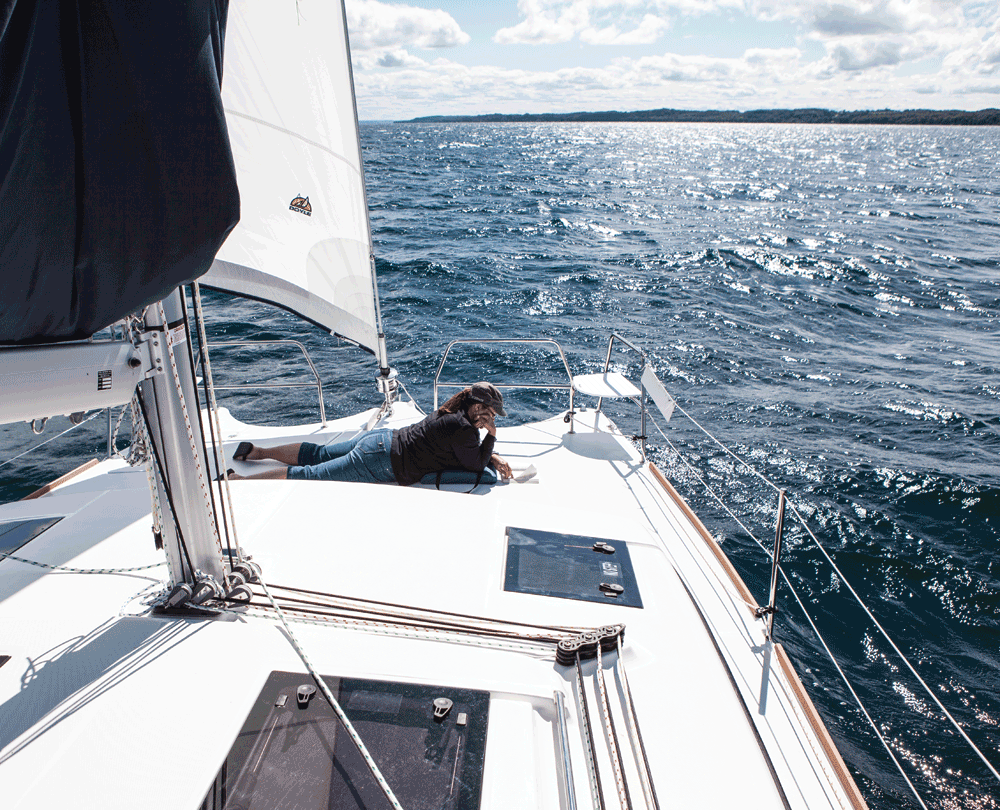 The ride is comfortable even sailing at 9 knots.
Marianne Lee

Once again I played anchoring roulette, seeing if we could get the boat in just a little shallower water than the day before. In Sutton’s Bay, the depth seemed to go instantly from 50 to 3 feet, from deep, dark-blue water with a very defined line of teal green. I wasn’t ready to push it to 3 feet just yet, so to find that sweet spot, somewhere around 6 feet, we paced back and forth along the teal line. I eventually gave up and dropped anchor just on the deeper side of the teal.

With acres of shallow bay, picking the right location in Sutton’s Bay had nothing to do with what the town’s main street—with its stylish restaurants, coffee shops and bakeries—had to offer. It was simply that we could see from the boat that right at the beach’s edge was a playground. As much as 2-year-old Maddy loves to sail, after a full 24 hours of confinement, it was time for her to get off the boat and get her wiggle on. Cruising guidebooks really ought to mention where playgrounds can be found. We launched our little two-dingy fleet, and then stormed the beach, targeting the playground.

The plan was to spend the night in Sutton’s Bay, but because there was a bit of a lump coming out of the north the crew insisted that we move up the shore to a smoother anchorage. I reluctantly gave in, and we moved the boat a half hour’s motor to the north. However, the next morning everyone still wanted to go ashore at Sutton’s Bay to explore. Back south we went. It was still early and the wind had not come up, so we weren’t missing any sailing. The crew gathers on the hard top to watch the sunset.
Marianne Lee
Hours later, we were on a powerful reach to our last anchorage, Old Mission Bay, which is inside the a long, narrow peninsula called Old Mission Point that divides Traverse Bay lengthwise. It was easily the best day of sailing I’ve had in a long time; the late August sun was out, yet not strong enough to cook us, a stiff breeze was blowing from the right direction, and the boat was simple to sail. Best of all, everyone was enjoying themselves. Becky and Kaitlyn were below having a blast with the challenge of cooking up lunch with everything moving around, Maddy was enjoying a nap and Marianne was snapping away with her camera.

When we tucked into Old Mission Bay, it looked like the north woods and Caribbean had somehow fused together. The water was light turquoise from about 300-yards offshore, and so clear you could see every ripple in the sand below. Past the beach, was a line of trees, with tall pines sticking high above the rest. Had it actually been the Caribbean, the shore would be overflowing with crowds, high rises would occupy every spare foot, and the bay would look like a rush-hour traffic of boats. But it didn’t; instead, there were only a handful of small boats on moorings and a few shore-side cabins. My kind of place.

Anchoring in Old Mission Bay was my last chance at pushing the anchoring depth. Having swum under the boat a few times before, I was confident. We were going in. At 41/2 feet, the anchor was set into the sand and the swimmers quickly hit the water. Being able to stand in the water next to the sailboat was a novelty lost on our nonsailors, but I found it to be cool. A quick dive underneath the rudders, and I measured less than an arm’s length tip-to-sand. I was impressed. I walked over to where the anchor was set, ducked under and tried to tug it, move it, or even just nudge it ever so slightly. With the full weight of the 20-foot chain spread out and the boat attached to the very end, I couldn’t even get the chain to wiggle. It was an interesting perspective on what dynamics really take place on an anchor.

When the trip came to an end the next day, Grand Traverse Bay was still at the top of my list for favorite cruising places, a sentiment shared by my crewmates. The peaceful beauty of Traverse Bay is unmatched. But what really pushed the trip over the top was my unexpected delight with the cruising cat. The biggest plus, which no one was actually aware of, was the total lack of seasickness or even a hint of feeling green, especially for the nonsailors. Instead, everyone moved freely about, inside and out, as if we were in a cabin at the shore’s edge. Of course, I enjoyed the versatility of anchoring anywhere I pleased, and the cat made quick work for the sailing passages. A beautiful place to sail, fair weather and the perfect boat: You can’t ask for much more than that for a charter cruise.