At some point in its life, every boat will need a deck fitting replaced or will develop a leak that must be corrected. And while replacing deck hardware is not a complicated operation, doing it incorrectly can cause serious damage down the road. Install a fitting properly and you have a sturdy piece of hardware set for the long haul. Do it incorrectly and you face rotten core or compromised bulkheads.

Owners may choose to replace a fitting because they want to upgrade to something stronger and lighter or because they have concerns about the age of a piece of hardware. A few basic steps can achieve a good, long-lasting seal between a fitting and the deck. 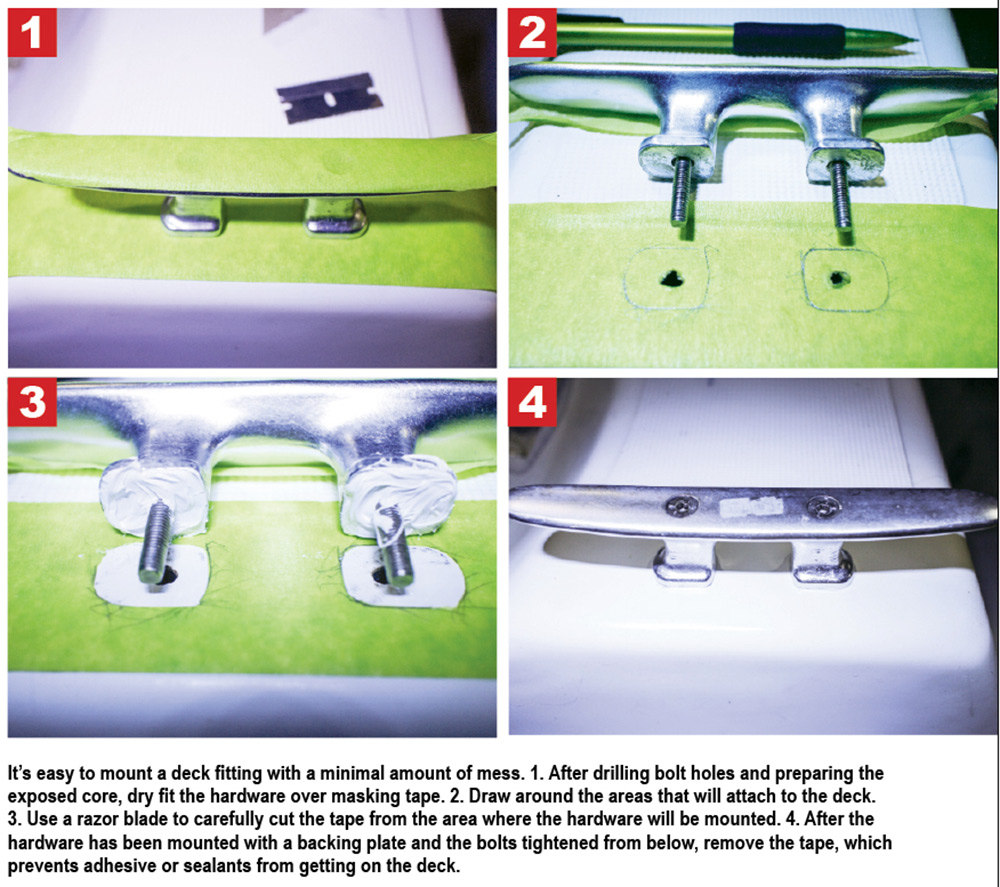 The first step is to remove the hardware or fitting that will be replaced or rebedded. In most cases, removing fittings is not difficult as the sealant is often broken down enough to not put up too much of a fight. If the hardware was originally bedded with 3M 5200 adhesive sealant, you may have to go to drastic measures to remove the fitting. More on the best sealants to use later.

Start by removing all of the nuts and bolts fastening the fitting to the deck, being careful, of course, not to lose any overboard. Then use a good metal putty knife with a one-inch blade that extends into the handle to gently pry under the fitting. Use a hammer to tap the putty knife between the hardware and the deck, working around the piece gradually until it breaks free. Do not use a chisel or screwdriver for this task as you risk damaging the deck and possibly the fitting.

Whether you are replacing the hardware or mounting a new piece, it is important to thoroughly clean both the deck and hardware. The old sealant needs to be completely removed and the area should be degreased so that a good bond can take place between the sealant, deck and hardware. The putty knife comes in handy to scrape off as much of the old sealant as possible. Adhesive removers can manage the rest but need to be used with care as they can stain the gelcoat or paint. Tape around the area you’re working on to protect the paint and then use an adhesive remover to clean off the residue.

With the deck hardware removed, it’s a good opportunity to check on what’s lurking underneath. Check for wet or rotten core by using a screwdriver to feel around in the bolt holes or take a sounding by gently tapping and listening for changes in pitch. If you find a problem with the core, or the deck is damaged in the removal process, assess the best way to fix the issue and do that before moving on. Making those repairs is vital to the soundness of the boat.

Assuming that the deck and core are still in good shape, it’s a good idea to seal the core with epoxy to prevent any future leaks from soaking into the core. Tape around the bolt holes to prevent any drips from causing a problem and put a piece of tape over the bottom of the hole from inside the boat. Using a two-part epoxy, work it into the hole and paint it on the core with a small paintbrush or acid brush, coating the exposed core and allow the epoxy to cure.

If you are replacing the deck fitting with a new one with a different hole pattern you will need to fill the existing holes. To do this, dig out some of the core surrounding the bolt hole using a screwdriver, allen wrench or other sturdy tool. After cleaning out all the removed core with a vacuum, tape off the bottom of the hole then inject thickened epoxy from the top using a syringe, filling the hole from the bottom first and backing the syringe out as the hole fills to prevent any air bubbles (Figure 1). If you found a small amount of wet core around the bolts but are rebedding the same fitting, remove the damaged core and fill with thickened epoxy as described above. Once the epoxy is cured, you can clean up the hole with a drill. 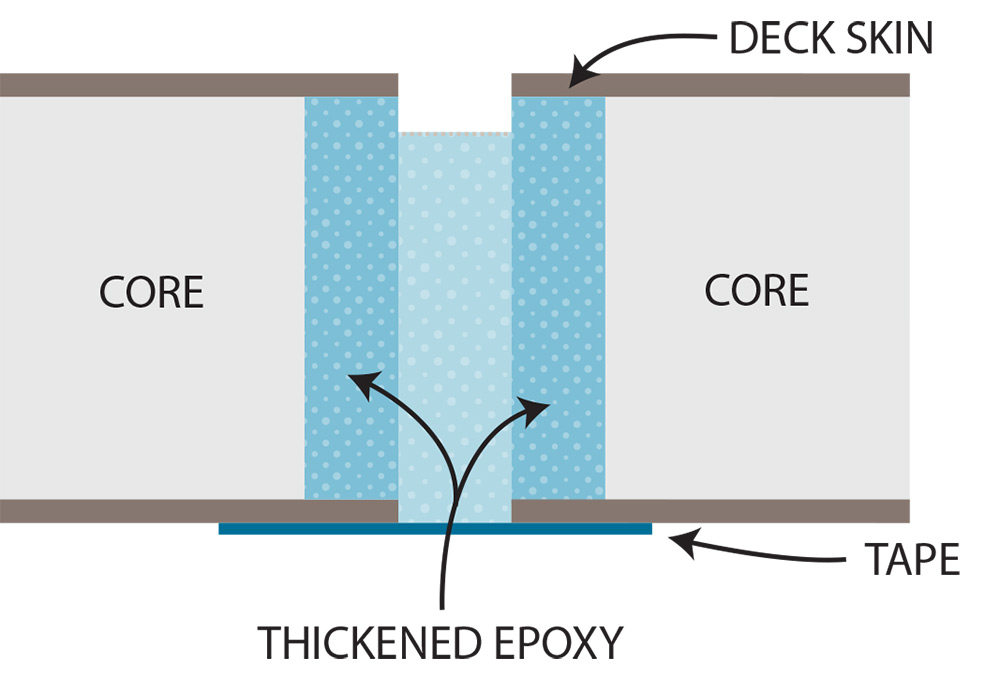 If you are mounting a new piece of hardware, the hardware should come with a bolt hole template that is to scale. Place the template on the deck in the location you want and with a center punch, mark the hole centers on the deck. Once the hole locations are determined, drill a pilot hole all the way through the deck, being very careful to keep the drill perpendicular to the deck, which is not necessarily level. The next step is to drill the hole to the size that will match the bolt. To prevent the paint or gelcoat from chipping, run the drill backwards until you have a countersunk hole the size of the drill bit tip. Then drill the hole, maintaining the perpendicular angle to the deck. Run the drill about three-quarters of the way through the deck and then drill from the other side, again running the drill backwards at first to prevent chipping.

Do not underestimate the importance of backing plates when installing deck hardware. They can be as simple as using fender washers to disperse the load or as significant as aluminum plates or Garolite—compressed fiberglass sheets—cut to fit. Some applications, such as jib tracks, require channels or square stock for proper backing. The backing plate best suited for each piece of deck hardware depends on its usage, loads and deck construction. If you have a fitting that is prone to leaking, chances are that a deck issue, such as a wet core, or the lack of a proper backing plate are to blame.

Once all the holes are drilled and the backing plate fabricated, it is a good idea to dry fit everything to ensure good alignment before you introduce a sealant into the mix. If there is any adjustment to do, now is the time to take care of that. To help in the cleanup of sealant after your final mounting, tape over the entire area, including where the piece of hardware will be mounted. When the piece of hardware is down during the dry fit process, cut around the piece with a sharp razor knife, being careful to only cut the tape and not the paint or gelcoat under the tape. When you remove the part, you can then remove the tape that was under the fixture leaving the rest of the tape in place.

Once you have all the parts necessary to mount the hardware and you have checked that everything fits, it is time to put the part down for the final time. Put the bolts into the fitting and put tape over the heads to keep them in place (Figure 2). Then spread a thin layer of sealant on the underside of the fitting using the putty knife. By putting the bolts in this way, it keeps the end of the threads clean as they go through the holes, making putting the nuts on a lot easier. Once the sealant is on, put the part into place, go below and put the backing plate on and tighten the bolts.

There are a number of options for sealants and adhesives on the market. Look for something that is UV stable, long lasting and made for a marine application, such as 3M Fast Cure 4000 UV. It’s important to avoid adhesives that have more holding power than is necessary. The main function of the sealant when bedding hardware is to seal out water leakage; the bolts do the lion’s share of the holding. Products like 3M’s 4200 and 5200 (sometimes referred to as “52 million”) have more adhesion than you need and when it comes time to remove or rebed a part it will be nearly impossible to get them off the deck without causing damage. There are other good sealant options, so use what works best for the project.

Cleaning up after you have bolted down the part is just as important as resealing the part in the first place. Not only does it look good to have all the excess sealant cleaned up but it also prevents degradation of the sealant.

Whether you have taped around the part as described earlier or not, the first step is to remove as much of the excess sealant as possible with a putty knife. After that you can easily wipe up the rest with a rag and adhesive cleaner, again being mindful of the paint when using cleaners.

Allow the sealant on the newly bedded fixture to cure according to the manufacturer’s recommendations, usually about a day in optimal temperature and humidity conditions, before putting the fitting under any kind of load. With your deck hardware properly mounted you can rest assured that it will serve you and your boat well for years to come.