Home . Articles . News . Technique . How to be a great crewmember

How to be a great crewmember Tom Burnham and the crew of Quantum Racing give it there all at Key West Race Week, from hiking hard to race preparation.
Paul Todd/Outside Images photo
Will crew for beer!” scrawled on a piece of cardboard is one way to get a ride on a sailboat race. This at least will attract a fun-loving skipper willing to take a chance on someone bold and silly enough to comically advertise themselves for hire.

Finding an opportunity to go racing, whether it be on a Hunter 336 for a weekly beer can series or a professionally crewed TP52, can be daunting. All the way through the ranks, most sailboat teams are tight little units with core groups of regulars. Standing on the dock with a sign, or registering with an online crewfinder are ways to get a spot on a boat. Word-of-mouth helps too. But it’s what you make of those opportunities that will determine your racing career trajectory, no matter how small your aspirations.

The best crews on any boat all share a few common attributes. If you want to be a good crewmember, or even raise your level in hopes of jumping on more successful programs, ask the best sailors for advice.

“A person’s attitude is the most important skill they can have,” said Dave Perry, who is known widely as a racing rules expert but is considered one of the best team builders in the sport. “The attitude is, ‘How can I help the driver and team meet their goals?’”

Perry is a match racing champion who recently won his fifth national title. One misstep in crew work during a match race, or even the slightest argument, can cost a team a race or even a championship. Stakes are high and even though the average crewmember racing in a local PHRF fleet isn’t subjected to such lofty standards, there are many non-sailing approaches that make for an excellent crewmember at any end of the racing spectrum.

The attitude Perry mentions means knowing when to speak up and when to keep your mouth shut. This begins with a simple conversation before ever stepping foot on the boat.

“You need to know what’s expected of you,” he said. “Have that conversation and make sure you can do what is expected.” Perry said that once roles are clear, it’s time to “blend and bend.” Homework is the next most important step in being a solid crewmember. “Ask around about what you should bring,” Perry said. “If you’re on the bow, bring good kneepads. Be physically ready. You can tell right away who’s done their homework.”

Once aboard, “Plan to be the first there and last to leave. Always be doing something. And connect with someone who’s working in the same area as you on the boat and follow their lead.”

The world’s top coaches agree that clearly defined roles aboard a racing boat are a good starting point for any team. This concept is often lost on more relaxed teams with some believing that defining crewmembers’ roles in detail would take the fun out of the evening’s race. As with most group situations, it’s all about leadership and the delivery of the message.

“You need to do your job to the best of your abilities and not step on other people’s toes,” said Tom Burnham, a crew coach for the Swedish America’s Cup team Artemis Racing. “It’s a common problem in sailing. Trying to do other people’s jobs.” He said even he finds it difficult to avoid getting distracted by “peeking” at someone else’s position. “But you have to respect and carry on with your own task.”

Burnham, who has been a top Olympic team crew and is the pit man for the successful TP52 Quantum Racing program, says that any member of a team should strive to be “humble and coachable and open to new ideas.” The pitfalls of having crew without these attributes can frustrate even the calm and collected Burnham.

“It’s rare today to see micro management,” he said. “Coaching three to four-person crews, the last thing I want to see is everyone acting like a 6-year-old soccer team—everyone following the same ball. They need to look out at the course.”

No matter how big the boat, every hand and set of eyes makes a difference. Nowhere is an individual more important than crewing in a small, doublehanded dinghy. And the most challenging of all this type is likely the Interclub Dinghy. After all, when frostbiting in this class, a mismatched crew could end up easily going for a dip in icy water.

“I only have two rules for the people I sail with,” said Meredith Killion, a consistently top-performing Interclub sailor: “They have to be nice, and not capsize me.”

Killion’s approach as a crew—identifying a crewmember not by sailing record but with simple criteria and attitude—has led to a successful post-college sailing career. Medaling in Interclub regattas led to several world championships in the Lightning class with successful one-design sailor Ched Proctor. In the early stages of her career as a crew at Yale, this approach has borne fruit and she’s had fun along the way.

“It doesn’t matter how well we do,” Killion said. “A bad day on the water is better than a good day at work.”

This attitude has lead Killion to say yes to opportunities this All-American sailor would normally have declined. Always having a pair of sneakers, shorts and a life jacket in her car led to crewing in Vanguard 15s at Cedar Point Yacht Club near her office in Connecticut. Proctor noticed her and she has been his regular crew ever since.

“In V-15s, I sailed with a 200-pound guy and it was always light,” Killion said. “It may not seem illustrious to do that but it was a ton of fun and it often opens doors to more exciting opportunities.”

Both Perry and Burnham reiterated the importance of managing expectations when racing,  Killion agrees.

“Obviously I like doing well,” she said, “but if you go into it with the right expectations, you’ll have a good time. Sailing with people less experienced, being in the first half of the fleet is often an achievement.”

There may not be too many similarities between the roly-poly Interclub and a TP52, but Killion said that all knowledge is transferrable.

“You have to be willing to learn,” she said. “Going out sailing, you learn something new every day in any type of boat. Take suggestions and at least try doing things a different way.” 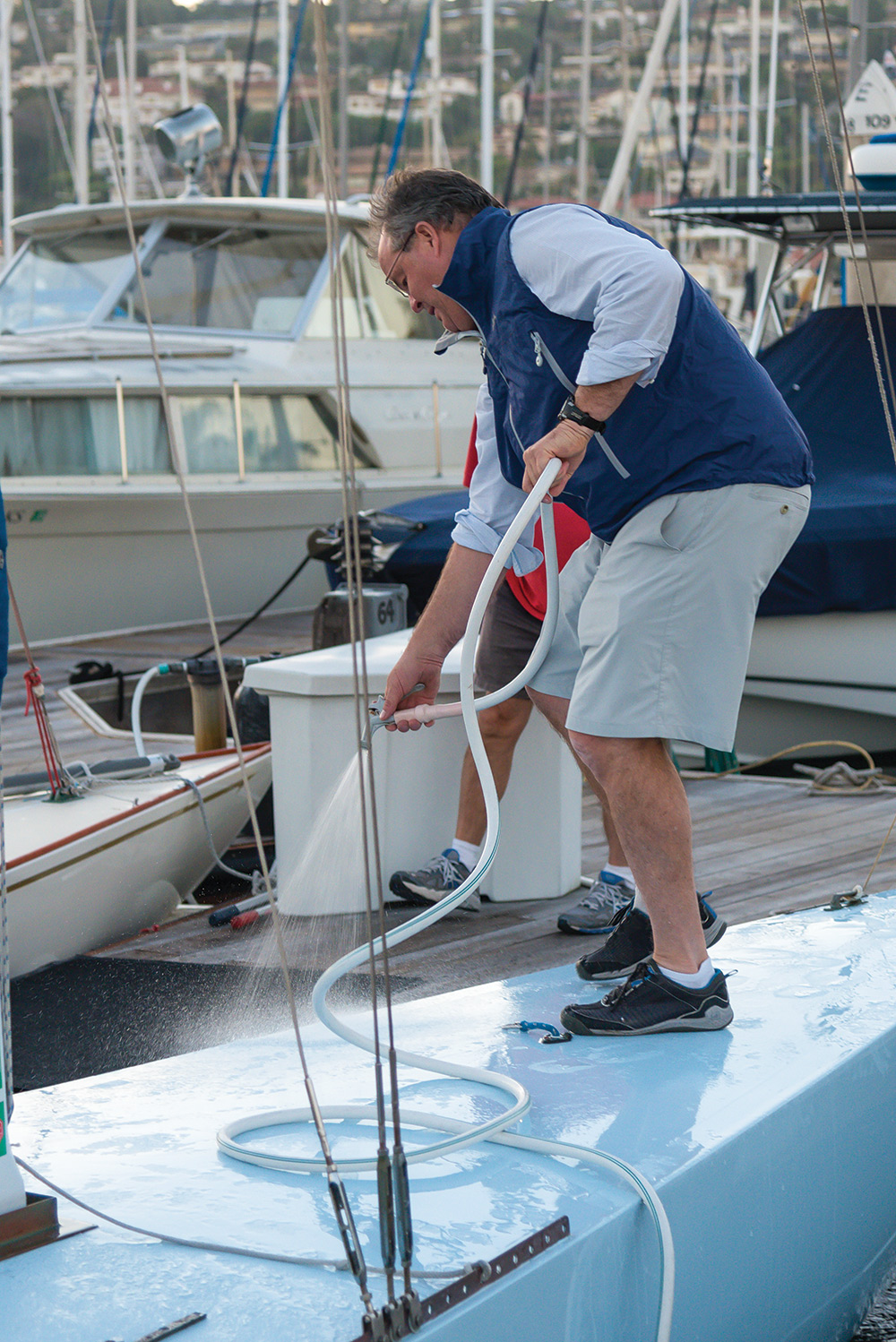 The race day isn't over when you cross the finish line. Good crewmembers help clean up the boat and are eager to pitch in before they are asked. Enthusiasm can count for more than skill, and if you are known as the can-do crewmember, you'll never have a p
Paul Todd/Outside Images photo
Never underestimate the power of enthusiasm: What you may lack in knowledge you will more than make up for with a positive attitude and willingness to help out. Being a good member of a crew goes well beyond helping a boat win races. Offering to bring lunch or get the boat in top form for a race are equally as important as helping with the perfect spinnaker set. And staying after a race to help fold sails, coil lines, wash down the boat and take the garbage ashore is compulsory.

Sometimes the best crewmembers are the ones who pitch in when they see something that needs doing instead of waiting for someone to ask. Carry a sail down the dock, grab the turtle while others are folding the sail or clean up the galley after a meal. People who are pleasant to be around will always have a spot on a crew and as they learn more, they’ll become part of the invaluable core of the team.

If crewing aspirations in sailing reach to the highest levels—the America’s Cup, the Olympic Games, or the Volvo Ocean Race—the best crewmembers  have to become great members of a bigger team. For some elite sailors, it is hard to transfer their positive attitude and helpful ways from their boat to the larger group of supporters and sailors from other boats on the team.

Nowhere is there a bigger sailing team in America than the US Sailing Team Sperry. And Annie Haeger, the top women’s 470 helm and recently named Rolex Yachtswoman of the Year, has learned to find her place with the country’s top sailors.

Haeger said sailors from different classes have different strengths to lend to the greater group. “I know if I need boat work advice I go straight to David Hughes,” she said of the top 470 men’s crew. “All of us want each other to win a medal, but with a little twist, there are some people we need to beat. I put a lot of energy into not making it awkward. We have worked on keeping it very professional for 2016.”

There’s a common thread across this range of experience. Across the board, knowing what’s expected of you, focusing on doing just your job, helping out and keeping an open mind.

Whether you’re new to racing and just want to get involved, or an experienced hand,  the same philosophy applies: Be there, be positive, be helpful within your skillset. Racing, after all, is about way more than just winning and most of the fun is in being part of the team.