MOB recovery on a cat

Although the same principles apply, rescuing a person from the water on a multihull requires a different approach 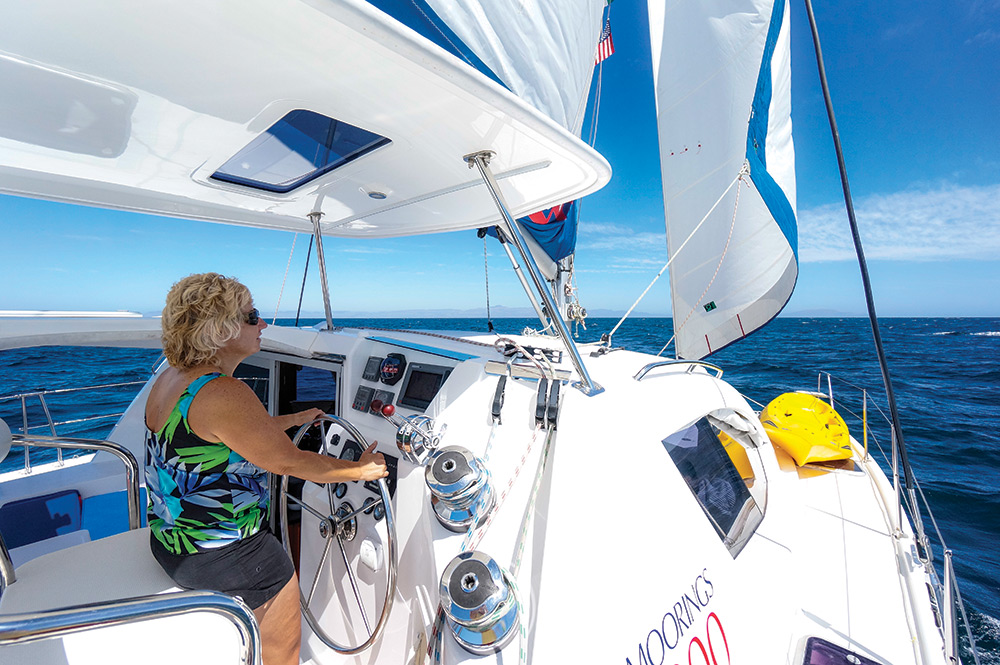 The helmsman will need to both steer the boat back to the victim and control the engines when rescuing a person in the water. This means that trimmers need to be on handling the sheets, easing or trimming as necessary and a dedicated person should point a
Bob Grieser/Outside Images photo

Few seamanship skills are more important than recovering a person from the water. Although many sailors are well versed on MOB recovery methods on monohulls, the sailing and handling characteristics of a catamaran require a different approach to rescue, one that should be practiced before any multihull passage.

There are two main things to remember about the difference between MOB recovery on a multihull vs. a monohull: The high freeboard on most multihulls makes recovery over the side very difficult, but low sterns offer easier and more sheltered access, and because of catamarans’ narrow hulls, bringing a person alongside a hull will also put them very close to a propeller.

The initial actions for a MOB situation on a multihull are the same as any other boat: Yell “Man overboard”; throw a life ring or life jacket overboard or deploy a man overboard module; have one crewmember do nothing but constantly point at the person overboard, and mark the position on the GPS. Everything that happens after that will depend on the boat’s point of sail, the crew’s skill and the sailing characteristics of the boat. The goal, however, is the same: Recover the sailor in the water as quickly as possible.

A catamaran is faster on some points of sail than a monohull, but it might not turn as sharply. Maneuvering back to the MOB can take more skill and the timing may be much different on a cat. 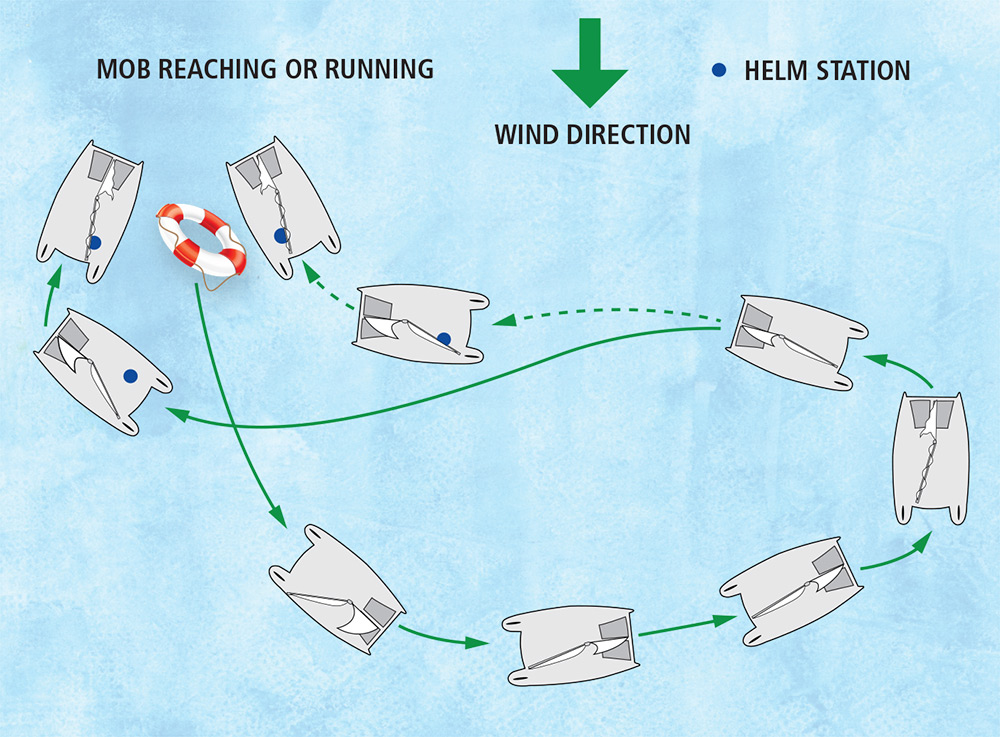 Rescuing a person in the water on a multihull requires care in the approach, keeping in mind that while the engine can help, narrow catamaran hulls put the propeller much closer to the victim and that the engine needs to be shut off on approach.
If the boat is sailing down wind or on a broad reach when a person falls overboard, the helmsman should immediately head up toward a beam reach and tack as soon as possible, returning on a close reach. Make sure that trimmers are keeping close control on the sails, easing or trimming as necessary to sail back to the person overboard and to stop the boat to windward of them. The spotter should help the helmsman find the person in the water by giving detailed position reports, such as, “He’s five boatlengths ahead at 11 o’clock,” all while continuing to point at them.

When sailing a beam reach at the time of a MOB situation, sail five to 10 boatlengths, tack and sail back to a point from which you can turn to make your final approach to the person in the water on a close reach as in the downwind example. It’s important to account for leeway and make sure that you don’t get too far downwind of the person in the water before setting up for your final approach.

Heaving-to is the most efficient way to return to a victim when sailing on a windward course.
If a person falls overboard while sailing on a close-hauled or close-reaching course, immediately tack the boat, leaving the jib backed. The boat will heave-to and drift downwind. From there, you can use the engines to maneuver to the person in the water.

As with MOB situations on monohulls, using the engine will make it easier to maneuver to the person in the water, but care needs to be taken before anyone reaches for the ignition key. Check and recheck that no lines are dragging in the water that could become fouled in the propellers. Rescue lines thrown to a person in the water should float, but be sure to keep an eye on them.

If you need to tack to get back to the person in the water, using the outside engine to help with the turn can help get the boat through the tack quicker and avoid ending up in irons.

Using the engines also allows you to completely luff or drop the sails if necessary so you can focus on getting to the person in the water as quickly as possible. An engine can also help you hold station while retrieving a person, but it is imperative that the engine closest to the person in the water is shut down. Because catamarans have narrow hulls, the propeller is that much closer to people in the water, making injury more of a concern than on a monohull.

If a person falls overboard while the catamaran is under power, immediately shift both engines into neutral. Once the person in the water is clear of the propellers, use both engines to return to the MOB, maneuvering the boat to windward of them so that a crewmember standing forward of the beam can throw the person a line. Once the MOB has the line, shut down the engine on that side of the boat.

Some multihulls have the advantage of two steering stations, which can help the skipper keep a closer eye on the person in the water, and maneuver the boat closer to them. Helmsman should be confident in their ability to switch from station to station as necessary.

Whether under sail or power, get a line to the MOB as quickly as possible and get flotation to them if they are not wearing a life jacket. A life jacket, horseshoe or even a cushion should be thrown to them. The high freeboard on a catamaran makes lifting a person over the side extremely difficult, so if the sea state allows, guide them to the stern where he or she can be pulled onto the transom or hoisted back on with the help of a dinghy davit or halyard. Again, because of the proximity of the propellers, it’s important that at least the engine closest to the MOB and preferably both engines are shut down.

Practicing a man overboard drill should be part of any sailing trip, but it’s particularly important to understand the differences in rescuing a person from a catamaran. Talking through the exercise and putting into practice will help when it’s most important.