The boat that just won't die

Fazisi, a boat unlike any the Whitbread race had ever seen, has always faced challenges. Designer Vlad Murnikov reflects on the life of the legend and how, even battered by a hurricane and plundered by thieves, you can never count the old girl out.

As it often happens these days, the news came through Facebook. The striking hull of a maxi yacht, massive yet graceful, laying on top of the salvage barge, looking very sad with all the deck gear stripped, hatches torn apart, stanchions and pulpits bent, yet looking hauntingly beautiful even in this distressed state.

For a moment I lost my breath. It was Fazisi, my dear boat bound for the scrapyard. Mine, not in the sense of the ownership, but the boat that I had conceived, designed and led in a famous race around the world.

I knew that Fazisi was caught in Hurricane Irma in September. She was thrown ashore on one of the Florida Keys some 500 yards from deep water, miraculously undamaged with her rig, keel and rudder intact. Her owners were unable to come up with the money for a rescue operation and left her lying there for four months. Local squatters stripped off the deck hardware and anything of value.

Eventually the boat was picked up off the beach by one of the salvage companies contracted to do the post-hurricane clean-up and ended up on that barge sailing into what appeared to be her last sunset.

First there was a dream 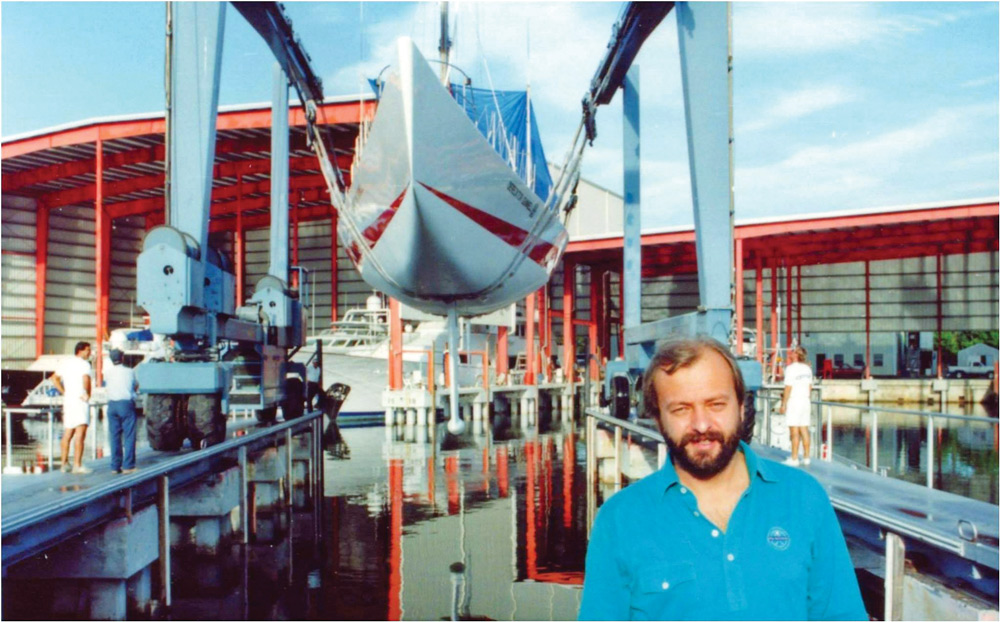 Fazisi came to life during the dramatic times of the Soviet Union collapse. In the mid-1980s I was an architect, part-time yacht designer and amateur sailor living in Moscow. I had big dreams of sailing the ocean, of racing in the greatest event in the sailing sport, the Whitbread Round the World Race, but I always thought of them as wild, impossible dreams. In the real world I was bound, just like all my fellow Soviet citizens, to live an ordinary and boring strictly regulated life.

But then Gorbachev came to power and things started to change. With little hope of success, I decided to take a leap of faith and launched the Fazisi project, trying to seize on the very first opportunity presented by Perestroika. Initially, when I shared my ambitious Whitbread plans with my sailing friends, most found the idea monumentally stupid, even dangerous. That was the reaction I had anticipated, but, surprisingly, a few of them showed encouragement, if not a commitment yet.

Had I come up with such an idea just a couple years earlier no one would have even listened to me. There was definitely something in the air, brought by the winds of change blowing over Russia that made people start to think differently. We had realized that government control over our lives was easing, that there was a chance, however slim, that for the first time we might get away with a crazy idea like that. It was not very long before we found ourselves moving full speed ahead on a wild roller coaster ride chasing the dream.

In a country that knew little about sailing and even less about entrepreneurship, I was able, in a short span of just 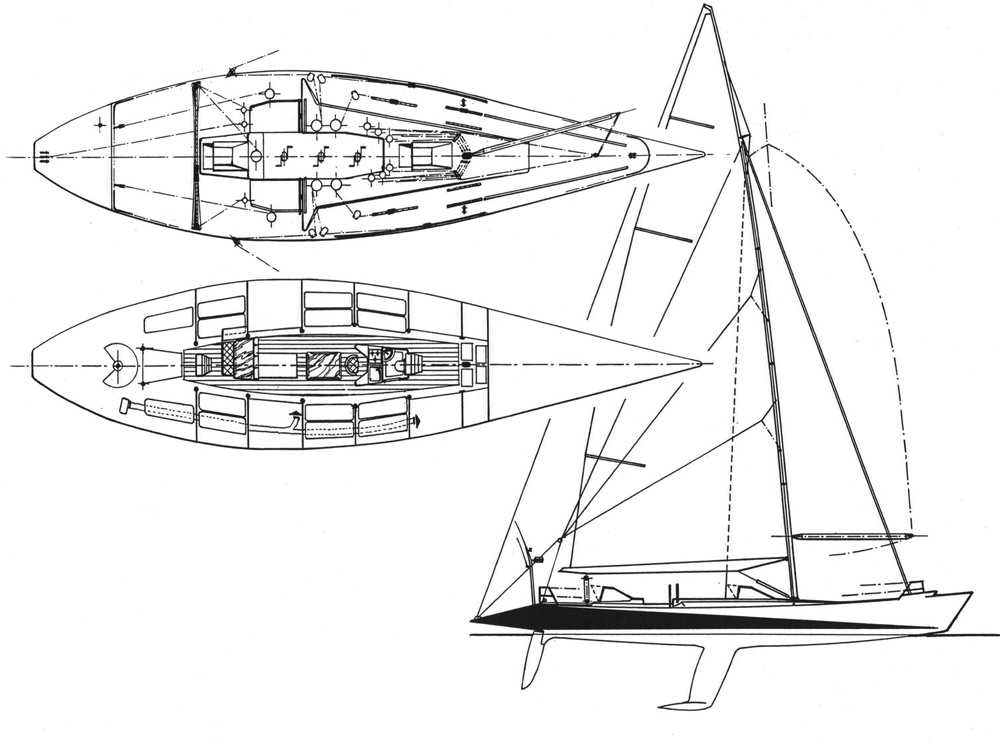 two years, to put together a design team and create arguably the most innovative maxi yacht ever, a remarkable 83-foot beauty, to assemble the team of enthusiasts to run the project, build the boat and eventually sail her in the 1989-1990 Whitbread.

Ours proved to be a turbulent voyage, on the high seas and ashore alike, with incredible ups and downs. We found initial sponsorship in the Soviet Union, enough to launch the project, but not sufficient to complete it. We started boat construction, but it progressed so painstakingly slow, mired by the Soviet inefficiencies, frequent lack of materials and inexperience in boatbuilding, it soon became obvious we were losing the race against time.

And then, as the hull construction was nearing the end, a civil war broke out in Georgia on the Black Sea where we were building our boat, putting the entire venture in jeopardy.

A flight to freedom

And yet, just a few weeks later, we pulled off an impossible feat, arriving at London’s Heathrow airport to a hero’s welcome aboard a huge cargo plane. As soon as a Ruslan AN-124, the aircraft that brought our entire crew along with the unfinished hull (83 feet long and 20 feet wide) to England, finally came to a rest, its door was unsealed, and a crowd of journalists noisily climbed into the cargo hold. Blinded by camera flashes, confronted by the One of the most famous photos of the boat is that of it emerging from cargo plane onto the tarmac at Heathrow airport.

microphones and video cameras pointed in our faces, we felt cornered and overwhelmed by the first tidal wave of publicity. As the media circus continued, the plane’s crew worked quietly behind the scenes to unload the boat. As I stood there on the tarmac, taking in the view of the Heathrow’s hustle and bustle, it suddenly hit me: Yes, we’d made it, we’d managed to escape.

On an adjoining runway, the supersonic Concorde jet was taxiing after landing. At some point it rolled behind our yacht and lined up with the Ruslan. As if by command, the armada of photographers tripped their shutters; the magnificent sight certainly deserved it. Fazisi’s exotic profile emerging from the womb of a Russian cargo plane, the elegant Concorde gliding through the gentle English twilight, the bright-red hammer and sickle on Ruslan’s tail, the British Airways logo emblazoned on the Concorde’s fuselage, all in one glorious shot. Perestroika summed up in a single photo.

At that moment I was both elated and torn by grave doubts. Yes, we’d made it that far, but we were way behind the schedule; it was hard to imagine we could ever make it to the start.

The Fazisi crew performed a miracle. Working around the clock, we completed construction and launched the boat just a few days before the race began. We won the race against time and now anticipated a glorious voyage with strong wind in our sails. We hit the jackpot by landing big-name sponsorship from Pepsi Cola—in the form of a check personally delivered by Dennis Conner—for the pre-start period with the option to cover the entire race. On top of that, American sailor Skip Novak, an experienced Whitbread veteran, joined our team as co-skipper. The great joint venture was born.

The morning I steered Fazisi toward the start line of the Whitbread Round the World Race was absolutely glorious. Jam-packed with spectator yachts of all sizes and shapes, press boats and cruise ships, chartered for the occasion by wealthy sponsors, the Solent was shimmering under the bright blue sky. Puffy, white clouds moved swiftly overhead, pushed by a fresh breeze. At least a dozen helicopters hovered above us. The start of the Whitbread turned out to be a great spectacle, and we were part of it. My great dream had come true. At the gun a magnificent yacht named Fazisi-Pepsi charged across the starting line with both Soviet and American flags waving proudly off her transom to the cheer of thousands of spectators. It was a jubilant start, but what only a few insiders knew was that the team was completely broke.

Pepsi’s sponsorship of Fazisi was short-lived, but for a brief time the boat was emblazoned with the company’s logo.

Anticipating a backlash in America for supporting the Soviets, Pepsi’s corporate executives in the last minute chose not to execute the option to continue the company’s sponsorship. It could’ve been a great marketing move for Pepsi, but its decision to withdraw support almost sank everything. In the end we prevailed and completed the race, in the process proving Pepsi’s marketing fears wrong when a few months later Fazisi arrived at the Whitbread stopover in Ft. Lauderdale, Florida, to the warmest American welcome.

But that came much later. And as Fazisi took the start and sailed away under a spinnaker with a giant Pepsi logo nobody knew how far we might go without any money.

Improbably, the untried boat with an inexperienced crew finished the first leg in Punta-del-Este, Uruguay, in sixth place in a  fleet of 23 boats, beating most of the world’s best competitors. Considering that London bookies took 100-to-1 bets that we would never even make the start of the race, this was a major success.  We became international news overnight. Vlad Murnikov and skippers Aleksei Grishenko and Skip Novak, were among the few in Fazisi’s inner circle that knew how dire the program’s financial situation was.

A few days later Fazisi made front-page news again after Russian skipper Aleksei Grishenko was found dead. The fight against never ending obstacles under enormous pressure and no respite in sight proved too much for him. He took his life, leaving a rambling note that explained nothing.

The tragedy almost ended our journey. But perhaps the thing Russians are most capable of is to unite in the face of tragedy. Deeply shaken and terrified, we somehow summoned our last reserves of energy to continue the journey over the world’s oceans with Novak at the helm.