Home . Articles . News . Technique . How to rig a preventer

How to rig a preventer

Preventers can keep accidents from happening, but they should be used with caution

A boom violently crashing across a cockpit can be deadly, toss a crewmember overboard or cause serious damage, so it’s worth making an effort to prevent it from happening whenever possible.

Preventers can keep the boom from flying to the other side of the boat in an unexpected jibe, but they can cause an equally bad situation if they cause the boom to be pegged on the wrong side of the boat during a jibe, pinning the boat down. This is a situation that can be more dangerous for the crew and even more likely to cause damage to the boom, rig or sails. Make sure a sharp knife is handy in the cockpit—good advice in general—in case a preventer has to be cut in an emergency. When a boat is laid over with a preventer on it is crucial to release it, by easing, throwing it off the winch or cutting as soon as possible after checking to make sure there is no one in the way of the boom. 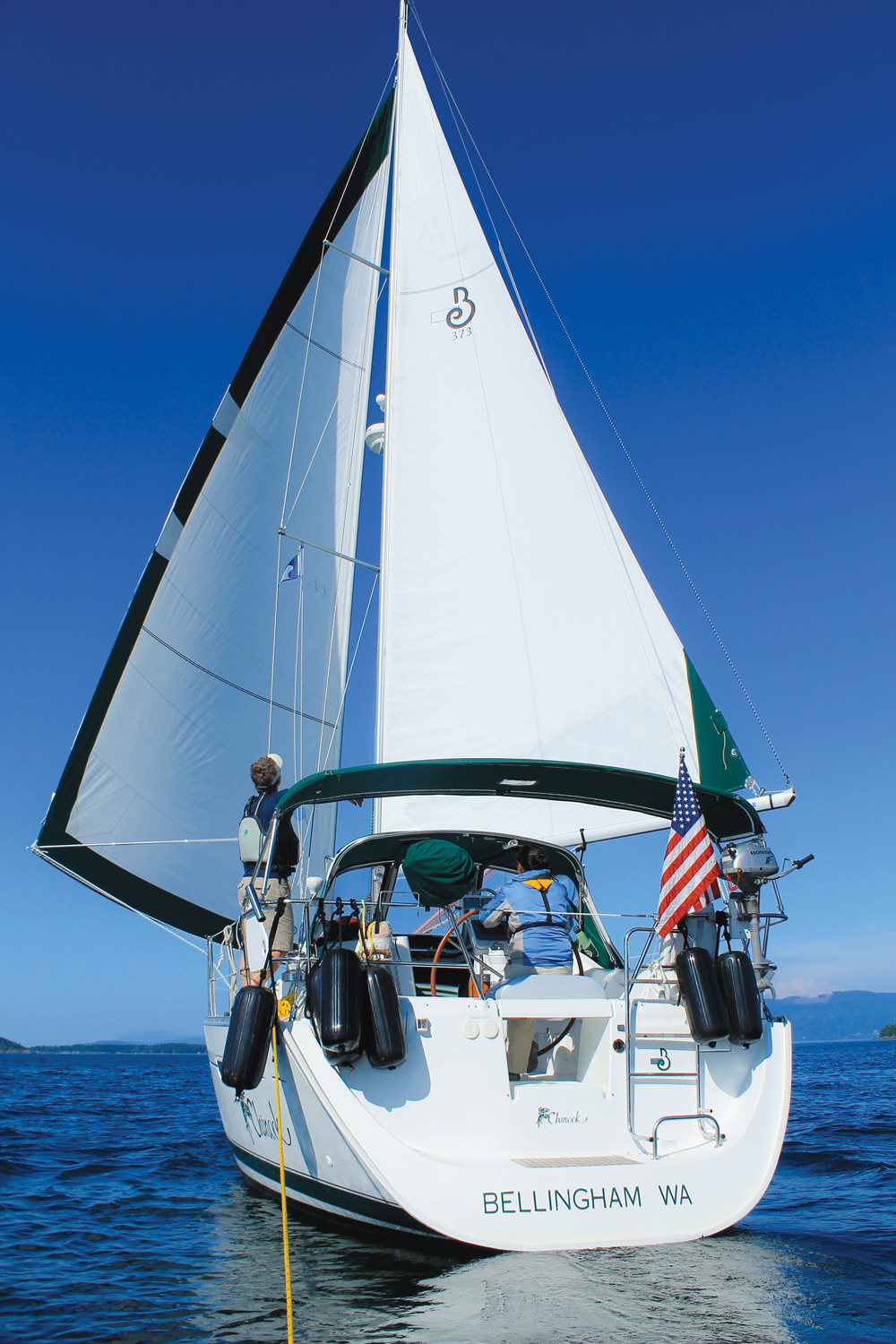 Sailing wing and wing is an efficient way to make way downwind, but it can be a challenge to keep the boom from flopping around. A preventer will keep it stable and, should the wind pick up, help prevent a dangerous accidental jibe.
Andrew Dawes photo

There is some disagreement about pros and cons of rigging a simple line preventer at midboom vs. the end of the boom. An attachment point at the end of the boom is likely less to cause boom damage should the boat roll in a wave and dip the boom, but it can be more difficult to set up.

The basic method of rigging a preventer involves rigging two pendants at the end of the boom then running a line with a snap shackle at the end through one of the pendants forward almost to the gooseneck. From the pendant, the preventer runs forward either to a block just aft of the bow or to a block mounted far forward on the toerail, then back to a snatch block on the rail at about midboom then to a winch in the cockpit. This setup is repeated on the opposite side.  A line with some stretch to it will help provide some cushion for the boom.

And end-boom setup works best with the boom eased way out, which may not work with all rigs. It also requires a crewmember to go forward to initially rig the system.

A preventer can also be rigged at midboom, near a vang attachment. The line is run through a snatch block on a rail just aft of the shrouds, then to a winch in the cockpit. This is a much simpler setup but can cause strain on the boom if it should take a good dunking from wave if the boat is rolling gunwale to gunwale. And if there is an accidental jibe in heavy air it could spell disaster for the boom.

A midboom arrangement may be the simplest setup to help brace the boom in light-air downwind sailing when the main may want to flop a bit.

A bridle can take some of the strain off the boom. This can be a temporary arrangement or a more permanent setup that incorporates a shock cord attached to the bridle line to keep it snug and out of the way when not in use.

Proprietary boom brakes systems may be a good option for cruisers looking for a more permanent setup that is ready to go at any time. These devices are designed to control the speed of the boom through the cockpit during a jibe.

Wichard’s Gyb’Easy Boom Brake is based on friction brakes used by mountaineers to control their descent during rappelling. It offers three friction levels depending on how the line is run through it, which allows for some versatility depending on the conditions. It comes with 3/8th-inch line that will help absorb shock loading.

The Gyb’Easy can be attached to the boom with a permanent bale or lashed on with suitable line, such as Dyneema. The setup follows the same general pattern of other midboom preventer methods, leading to blocks aft of the shrouds and then back to winches in the cockpit. It is designed for boats under 50 feet with less than 500 square feet of mainsail area.

The Dutchman Boom Brake operates on a similar principle, although a line runs through three sheaves controlled by a knob that lets you dial  the tension appropriate for the conditions. The brake is permanently affixed to the boom just aft of the vang then lines run to the rail behind the shrouds and back to the cockpit. When the leeward side of the brake line is loaded up, it serves as a true preventer, allowing the boom to swing a small amount to ease the shock load during an accidental jibe, but preventing the boom from fully swinging through the cockpit until the line is eased.

Using a preventer or boom brake doesn’t mean the helmsman can lose concentration. Preventing an accidental jibe, which won’t be pleasant even with a preventer or brake system rigged is the goal so helmsmen should take special care when sailing by the lee. But a boom management system can prevent an unfortunate turn of events from becoming a tragedy.