How to avert disaster when your boat starts taking on water

When the Farr PH 56 Monterey sank in May 2017 during the Antigua-to-Bermuda Race, nobody was more shocked than owner and skipper Les Crane. After all, he’d sailed the boat more than 40,000 miles during the previous 14 years and had confidence in its seaworthiness. The center-cockpit sloop had been updated months earlier and stocked with safety equipment.

Monterey sank approximately 220 nautical miles from Bermuda. All six aboard, including Crane, were rescued by another boat in the race. 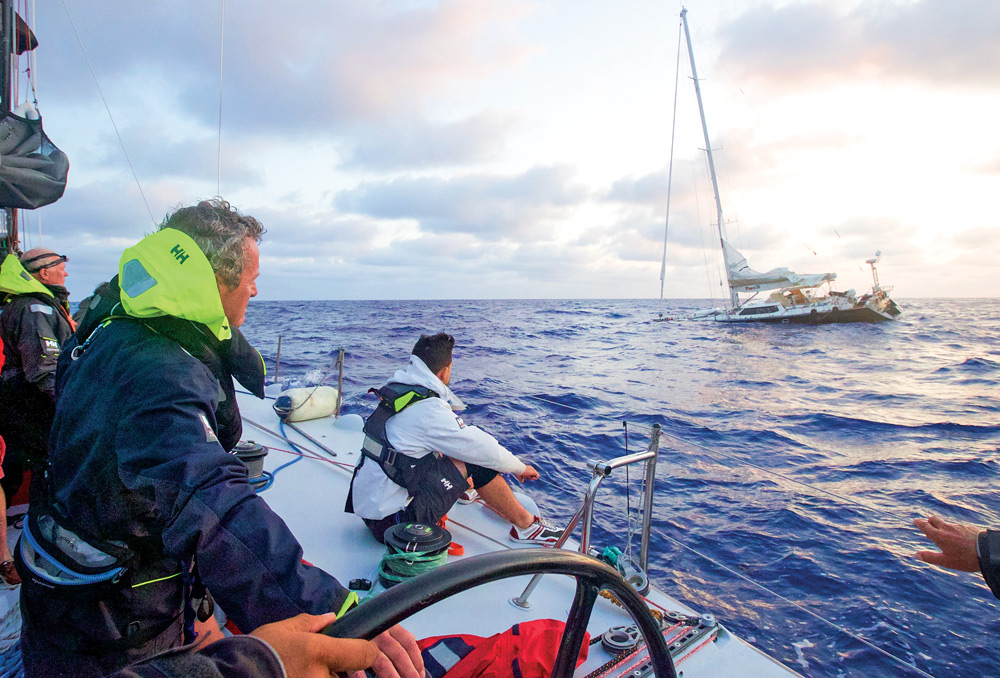 Owner Les Crane and his crew looked on as his boat Monterey sinks during the 2017 Antigua to Bermuda Race.
Tristan Peloquin photo

“We had become a little complacent,” he said. “We’d been sailing for four months, from Greece to Las Palmas. We’d already done 5,000 miles from Corfu. The crew knew everything about the boat.”

Reflecting on the loss, Crane drafted a list of mistakes made and recommendations about what he should have done differently. Here’s what he told SAILING Magazine:

Before leaving the dock, conduct drills for abandoning ship and flooding.

“We should have practiced dewatering at the dock. Same with man overboard and getting into the life raft,” Crane said.

Test the primary VHF radio and masthead antenna before setting sail. Check handheld VHF radios. Know how to use AIS to identify nearby vessels should you require help. Make certain the EPIRB and the satellite phone are registered and functioning. Otherwise they are of limited value.

In Crane’s case, AIS indicated two boats close behind when the sinking occurred, and the satellite phone allowed him to contact Bermuda maritime authorities. At least one other boat heard his radio mayday made using a handheld radio. The Monterey’s masthead radio antenna was not functioning properly in Antigua but the problem was not addressed. As a result, the radio transmission range was significantly reduced.

For the drill, assign crew on each watch to monitor overall boat performance and ensure completion of all tasks. Check seacocks and bilge pumps; coordinate communication using the ship’s radio or portable VHF units; reference the AIS transponder for ships to contact for stand by; prepare satellite phone by pre-programming with primary and secondary contacts; prepare to set off flares and activate the EPIRB; prepare grab bags; ready the life raft for deployment; insert life jackets into a plastic trash bag to keep them dry. The captain should remain unassigned in order to remain free to oversee the emergency. Make it clear to everyone aboard the most important task is to find the leak, and find it quickly.

Make a list of the numbered seacocks in large font size in case prescription eyeglasses are unavailable to those who require them for reading, which is what happened aboard Monterey. If the boat continues to take on water, check off each seacock as inspected to help determine the source of the leak.

Crane advised using a powerful, waterproof flashlight for the inspections and to keep the seacocks accessible, not hidden behind cabinets or under mounds of gear.

Have a bilge alarm sound whenever the primary pump is activated. This system assumes the lower secondary pump, which keeps the bilge dry on a day-to-day basis, may have stopped working or is overwhelmed by water volume.

“If you are going on a big passage, don’t presume the pumps will work,” Crane said.  “Bilge pumps on boats are constrained by the size of the tubing and the outlet.”

Manual bilge pumps are marginally effective and their use often distracts the crew from the primary job of locating the leak.

It’s important to stop and think about clues to why the boat is leaking. Did the boat run aground? Strike a heavy object in the water? Did anyone hear an unusual noise or sense an unfamiliar vibration?

The top priority is to locate and stop the leak. In addition to seacocks, the list of suspects includes rudder gland, stuffing box, keel bolts, hull-to-deck joints and any deck fitting where a hole has been drilled or cut. Also check the head intake hose, which often is not looped high enough to prevent seawater from entering when heeled. If the head overflows, it can cause the boat to founder.

Also check the engine’s seawater intake hose, which must remain open if the engine is to remain running in order to boost bilge pump power.

If the leak is forward, it could be from a transducer or depthfinder coming loose. If aft, the rudder shaft or stuffing box could be to blame.

Remove floorboards for inspection, but don’t leave them open where crewmembers might accidentally step into the hole and be injured thereby complicating the situation.

Tie a tapered, softwood plug to each seacock in case the tubing fails. There’s no time to look for them once the boat is taking on water.

If your boat has a single bilge, consider building a dam to slow the taking on of water once the leak is located.

Keep an electric 4,000-gallon-per-hour crash pump with a flat, rolled-up, 3-inch diameter hose at the ready. Fit it with long wires leading to alligator clips that can be attached to the house battery or other electrical source.

“If we had had one of these, it might have made a difference and helped us locate where the water was entering,” Crane said. “You can buy a dual-voltage one for $250 and add 25 feet of hose that will allow unrestricted outflow.”

Shift the weight and plug the leak

If the leak is located to starboard, shift crew and heavy gear to port. Although not a full-proof solution, it may help reduce the incoming water flow.

Attempt to stop the leak with rags, rubber sheeting or a neoprene wetsuit. At this point, it’s probably too late to use caulking, although underwater epoxy might prove helpful.

Stock the boat with red handheld flares and parachute flares. Although parachute flares have been deleted from Category 1 offshore racing regulations, Crane said the decision was based on the mistaken belief that state-of-the-art electronics make them unnecessary. The rescue boat spotted Crane’s parachute flares.

Look carefully at your chart or plotter to see if there’s a nearby beach on which the leaking boat could be driven ashore.

Crane recommended sailors participate in a rally or regatta.

“It’s a good way to go. You’re racing so you pay attention. It keeps people alert,” he said, citing the benefit of having other race boats nearby should things go awry.

Gilles Barbot, skipper of the rescue vessel Esprit de Corps IV, approached Monterey with bright white searchlights for night rescue. He advised not aiming them directly at the life raft since it might temporarily blind the occupants. “Direct the light where you want them to look or to hang on,” he said.

Alongside the life raft

The life raft should not be launched until it’s clear the boat will not survive. Barbot advised skippers attempting a rescue to “drop your sails, control your speed and monitor your boat heading. Prepare to toss lines. Pay close attention to wind direction and waves. Don’t let the raft’s sea anchor foul your propeller.

If a helicopter rescue becomes imminent, a crew already familiar with that procedure would be an asset.