Beneteau has long had the ability to put the go-fast into sailboats, with many of the boats in its First line winning offshore and inshore races. It even launched the foiling Figaro 3. Cushy comforts were relegated to its Oceanis line, but with the launch of the 51.1 last year and now the new 46.1, the company has begun to put performance back into cruising. 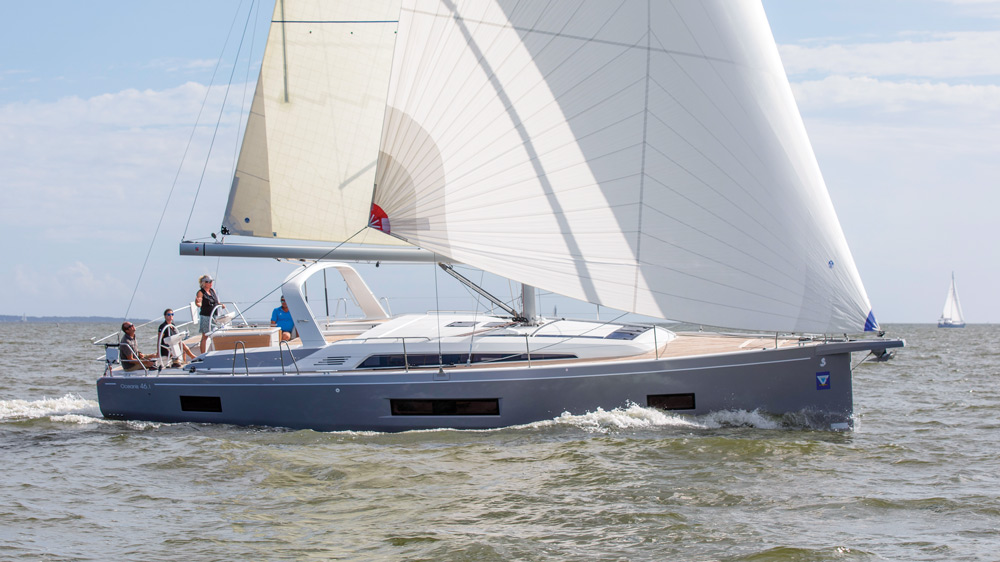 The Oceanis 46.1 debuted last year, replacing the bestselling 45 and the 48. Designed by Pascal-Conq with interior by Nauta Design, the 46.1 has many of the same features found on its bigger sister, the 51.1. The first American-built 46.1 launched in March at the company’s Marion, South Carolina, facility boasted gear from companies known for racing prowess, including North Sails, Harken and B&G. 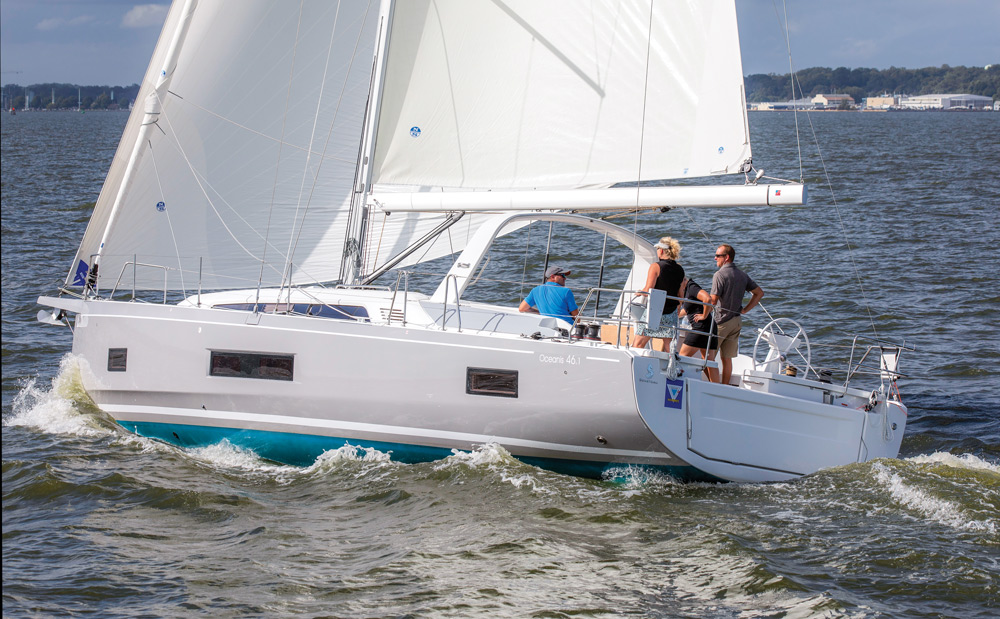 The mainsheet arch gets the traveler out of the cockpit and allows the midboom sheet to move farther aft on the boom for better control.
Billy Back photo

With a full bow section and what Beneteau calls a step hull with a chine that increases the interior volume but keeps a narrower waterline beam, the 46.1 has plenty of room for creature comforts. But the modern boatbuilding techniques result in an overall displacement of only 23,365 pounds. The many options mean you can power up the boat with a performance package that offers a larger sailplan and deep 8-foot  8-inch fin keel. A cast iron keel drawing 7 feet 9 inches and a shallow-draft keel drawing 5 feet 9 inches are also options. The twin sun lounge pads next to the companionway are removable and can be brought to the foredeck.

The boat comes standard with North Sails as a result of a new collaboration with Beneteau. The flexible sailplan comes standard with a self-tacking jib, and a 105% genoa is an option. A fixed bowsprit flies a 1,098-square-foot code zero on a furler and the 1,636-square-foot asymmetrical spinnaker for powerful off-wind performance.

The enormous cockpit can seat eight comfortably, and even makes room for twin sun loungers with drink holders adjacent to the companionway. The cushion pads can also be used on the bow. A dedicated wine bottle locker and a large space underneath the folding table to store a cooler are just some of the right touches for entertaining.

The optional swing-out plancha flat-top grill is built into the aft deck, and fits underneath the helm seat when stowed. By quickly unlocking the pins, it swings out over the stern step for cooking. Innovative collapsing davits disappear into the stern step when not in use. The optional swing-out plancha-type flat-top grill is built into the aft deck, and when stowed fits underneath the helm. By quickly unlocking the pins, it swings out over the stern step for cooking.

Lines are led cleanly aft under the deck to a bank of Harken two-speed winches within easy reach of the helm. Harken deck fittings are used throughout. Taking a cue from ocean racers, the 46.1 flip-up foot chocks on the cockpit sole at the helms can be raised when heeled, making steering more comfortable.

Below is a cavernous saloon. The test boat was trimmed in a satin-finished light oak, and the oversized in-the-hull portlights flood the space with light while offering a great view. With 6 feet 4 inches of headroom and 14 feet 9 inches of beam, the saloon is spacious, and the sleek joinery work exudes elegance.

The 46.1 has four interior plan options, and the test boat had the three-cabin, two-head layout that leaves more room for an L-shaped galley with extra counter space next to the companionway. It would be comfortable to work in the galley in a seaway, and it has a two-burner stove and oven, with top- and bottom-opening refrigerator. There is forward facing nav station that shares the port-side settee. On the starboard side, the large table can seat up to eight. In this three-cabin layout there are mirror aft cabins.

The forward owner’s cabin spans the full beam, and features a full double berth with access on both sides. Two port lights in the hull and two opening deck hatches bring in the natural light. The extra beam in the bow section leaves room for two short settees and plenty of storage, including two large hanging lockers. The head is split into two cabins, one for the toilet and sink on the port side and the other for the shower stall to starboard. The Oceanis 46.1 is finished in a satin light oak, and the interior styling is sleek and modern. The dining table can seat eight.

The Oceanis 46.1 was easy to spot on the docks of Bert Jabin Yacht Yard. Jabin’s, as it’s known as, is home to many of Chesapeake Bay’s big race boats, and the sleek new 46.1 fit right in.

We powered out of Back Creek, and once clear of the no-wake zone, the 80-horsepower  Yanmar kicked in. The boat handled crisply under power, and we easily unfurled the main and the genoa and set off under sail at 7 knots upwind in the 12-knot breeze. After days of stifling heat and no wind, it was refreshing to be under sail on one of the last days of summer.

The bay was busy with boats from the U.S. Sailboat Show, and we zoomed past the other models being tested. Popping the code zero on the roller furler was a quick affair, and the boat took off toward Annapolis easily hitting 10 knots. I had to remind myself that this was only a 47-foot boat.

The new Oceanis 46.1 had the power of a much larger racer combined with the fit and finish of an elegant cruiser. This cruiser with a racer’s pedigree would be a perfect boat for the Caribbean winter racing circuit, especially with the performance package, and I could imagine bringing aboard the trophies before setting off to cruise in comfort and style to the next event.