Bert Jabin’s Yacht Yard in Annapolis, Maryland’s Back Creek, was abuzz as I walked down the docks to get my first ride aboard the new Beneteau Oceanis 40.1. The week following the U.S. Sailboat Show in October is a busy time at the yard, with boats being hauled for surveys and new boats awaiting test sails. The new family cruiser designed by Marc Lombard was easy to spot with its high freeboard and full-length chines. 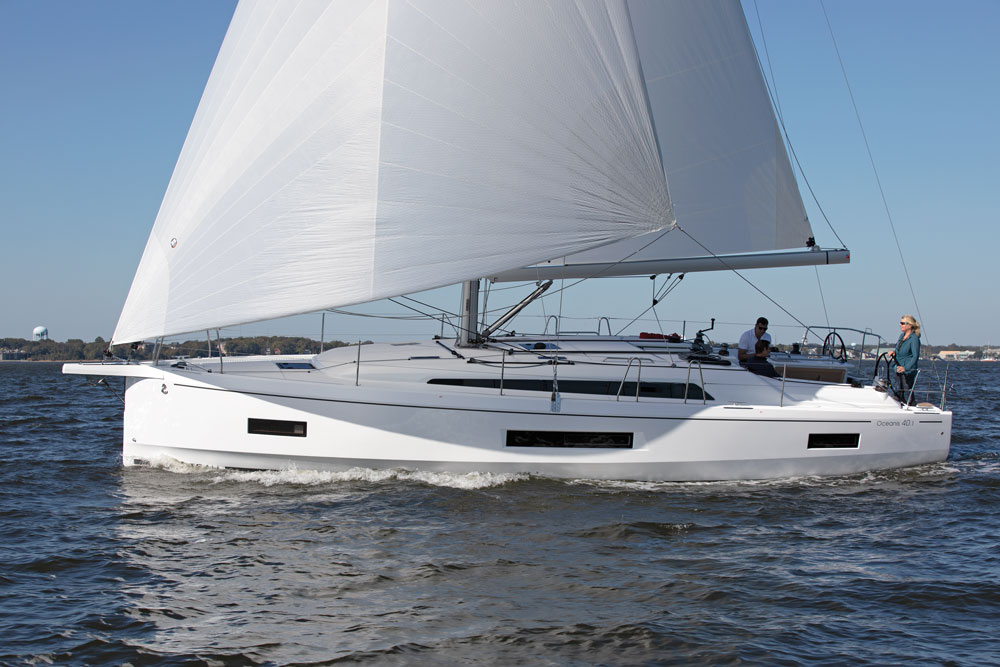 Beneteau is the largest sailboat manufacturer in the world for good reason. It has perfected the formula of creating high-quality, affordable cruisers and racers that are comfortable to sail yet fast enough to be fun. All manufacturing is now in Vendée, France, after Beneteau closed its Marion, South Carolina, plant in 2020. Its high-tech construction processes use a mix of resin infusion for the hulls and injection molding for the decks, which allows the company to reduce costs while maintaining quality control.

When it comes to design, longtime designer Lombard’s racing background shows in the 40.1’s long waterline with a double chine that runs the full length of the hull. It creates high form stability while increasing interior volume for accommodations. Twin rudders are a must with a 13-foot beam, and they offered good control.

It was a bit of clamber up from dock with the boat’s high topsides, but once aboard it was clear that all this hull volume was put to good use. The designers pushed the cockpit to the transom, with the twin helm stations all the way aft and long cockpit seats around a folding cockpit table that can seat eight people in the nearly 10-foot wide cockpit. There is life raft storage beneath the table. The transom drops down with a simple block and tackle, revealing a large teak swim platform.

All line controls are led to a bank of rope clutches and a pair of Harken winches on the cabintop. The test boat was outfitted with the optional bowsprit, and both the code zero and small genoa were hoisted on roller furlers.

The side decks were narrowed slightly by the wide cabinhouse, but the molded nonskid felt sure underfoot. At the bow, the anchor locker was large, and the optional windless was easy to operate.

The transom drops with an easy-to-use block and tackle to create a wide swim and boarding platform, with teak decking and a telescoping swim ladder. The split backstay and twin helms leave plenty of access room to the “back porch.” There’s ample storage space beneath the cockpit floor, and the twin lazarettes gobbled up fenders and lines.

The interior by Nauta Desgin was crisp and clean like a new set of linen sheets, and the neutral color palette and plenty of portholes and eyebrow windows kept it light and bright.