Catalina owners are an enthusiastic bunch, and when they said they were yearning for a big offshore cruiser, the company responded by using their wish list to design the company’s flagship, the Catalina 545. This truly American cruiser made its debut in fall.

“We wanted to take a different approach when starting the process of designing the 545,” said Gerry Douglas, Catalina’s vice president and longtime designer.  “Our dealers were telling us that their customers wanted a bigger boat than the 445 and the only option was to buy a European model.”

“It was about a three-year process to design and engineer the 545, incorporating owner feedback and making sure we gave them a traditional American boat with all the things they expect,” Douglas said. “We left no stone unturned when finding out how our customers use their boats and turning it into a reality.”

Catalina was founded by Frank Butler and launched its first boat, the Catalina 22 trailersailer built in California, in 1969. In 1984, Catalina bought Morgan Yachts in Largo, Florida, and in the ensuing years has expanded the manufacturing plant where all Catalinas are now built over a sprawling 26 acres. The 545 is the latest in the company’s 5 Series that was launched in 2010 with the 445 Cruiser.

“We went into the design process knowing this was going to be a bluewater cruiser and we made safety a priority,” Douglas said. “Our owners sometimes sail with extended family, but most often sail as a couple, and we wanted to make this boat easy to sail shorthanded.” 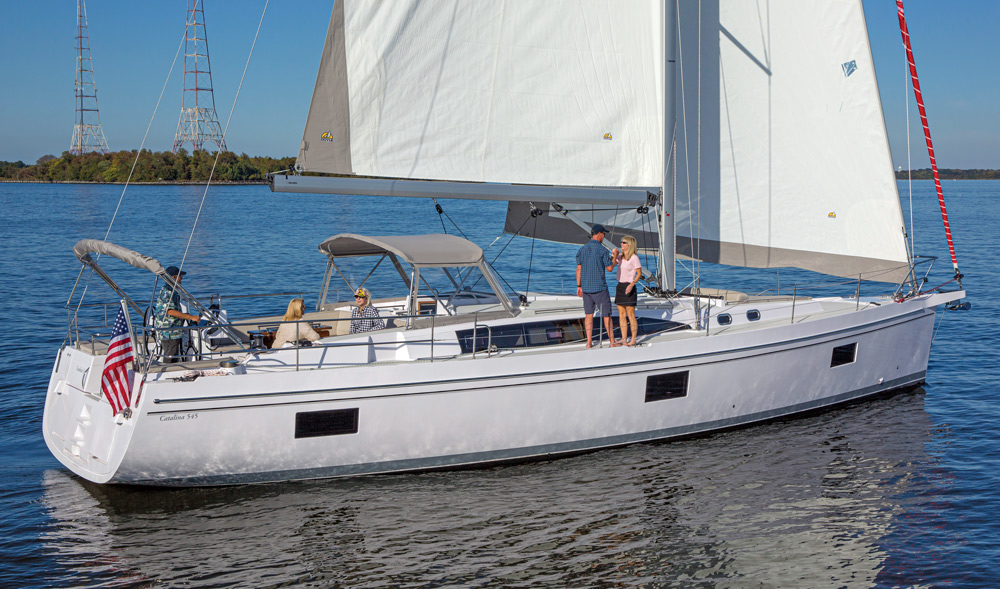 The large cockpit has flexible canvas to keep the sun out.

The 545’s fiberglass hull with end-grain balsa core above the waterline has a molded fiberglass structural grid and watertight bulkheads in the bow section, which the company calls the “strike zone,” and aft, which surrounds the rudder post encapsulating it in a watertight box. The one-piece deck has molded diamond patterned nonskid and bulwark toerail.

At first glance, the 545 has a more modern look than its predecessors, with a gentle spring in the sheer and nearly plumb bow. The high freeboard keeps the boat dry and provides interior volume below.

Deck hardware is robust, including stainless grabrails and lifelines. On deck storage abounds, with a cavernous lazarette and dedicated lockers for the tender’s outboard motor and grill. There is even more storage underneath the cockpit that is accessed by the hydraulic drop-down transom. On the bow are two lockers, one for chain and rode, another for sails and fenders.

The cockpit is huge, from the twin helm stations to the more than 6-foot-long seats, and it can handle a crowd comfortably. The folding centerline cockpit table features an insulated icebox to keep drinks cool.