Selecting the right propeller for your boat

Choosing the correct propeller will give you the best of all worlds for performance sailing, club racing, motor sailing or motoring

Should you ditch your fixed propeller? If your goal is to sail or motor to your destination more quickly, whether to the anchorage for cocktails or to your first waypoint on a passage, then a folding or feathering propeller delivers just that - less drag than all fixed propellers. The average boat equipped with a folding or feathering propeller will gain between 0.75 to 1.5 knots of boat speed under sail over a boat with a fixed-blade propeller. In the folded or feathered position your boat will steer better and point higher due to unobstructed water flow to the rudder.

Many sailors often say “We do not race, we do not need a folding or feathering propeller.” But once they have seen equal sized boats passing them, they will consider this upgrade in order to sail and motor faster with the added benefit of 100% reverse thrust.

What is the extent of your winter budget, and what other investments for your boat are you considering? If you had the option to purchase a new genoa for the same price as a folding or feathering propeller, ask yourself the following questions:

Feathering propellers are usually more expensive, roughly 10-15%, than folding props with the same blade count and comparable diameter due primarily to machining costs.

How do they work?

The hub for all propellers is the solid center cylinder to which the blades are attached and that connects to the shaft taper (SAE inch or ISO metric shaft diameter taper) or your saildrive spline.

The blades on a folding propeller open and close using geared teeth on the blades inside the hub, enabling them to pivot open and closed together. To open, folding propellers use the centrifugal force of the rotating shaft when the engine’s transmission is engaged. They close down (engine is off) from water passing over the blades from the forward motion of the boat through the water.  There are some folding propellers with no gear teeth so the blades are independent of each other, resulting in one blade failing to fully open or close, such as in light airs, or when catching weeds/kelp when sailing.

The blades on a feathering propeller are attached perpendicular to the hub and rotate through 180 degrees – 90 fully feathered for sailing, another 90 for full reverse. This action is geared and governed by stops inside of the hub that prevent the blades going past the set forward or reverse angle. To open to their pre-set angle, feathering propellers use the centrifugal force of the rotating shaft when the engine’s transmission is engaged. They feather when the shaft has stopped turning, the boat is under sail and water passes over the blades allowing them to rotate 90 degrees to align with the flow of the water.

Whether you are considering a feathering or folding propeller, all the choices should:

Propeller blades should have an airfoil shape, with the cross-section showing camber and twist, which will generate more lift than flat blades of the same area. Camber is the asymmetry between the two acting surfaces of an airfoil. The front surface of the propeller blade is more convex (positive camber), causing a difference in the flow across the blade, which causes pressure difference for lift. Twist in the blade is created with a shallower angle at the tip to account for the longer distance travelled by the tip, with each revolution, as compared to the inner blade (closer to the hub). The twist transfers torque from engine into thrust in water most efficiently (since the tips cannot get ahead of the inner blade).

Most feathering propellers have flat (planar) blades that resemble a paddle rather than the desired aerofoil shape of an airplane wing (the exception is the cambered blades on SPW’s Variprop GP and Varifold propellers). The flat shape is not efficient at producing thrust as a flat blade is overloaded at the tip and under loaded at the blade base, whereas a fully shaped aerofoil blade shape has a constant loading over its whole surface. Much like fixed-blade props, most folding propellers employ an efficient blade shape.

When researching propellers, look closely at how the blades open and close. Blades should automatically fold or feather when not in use and the deployment action should be absolute and perform consistently – can it “drop a blade”, “fail to fully open” or “fail to fully close”?

Waterflow to the Propeller 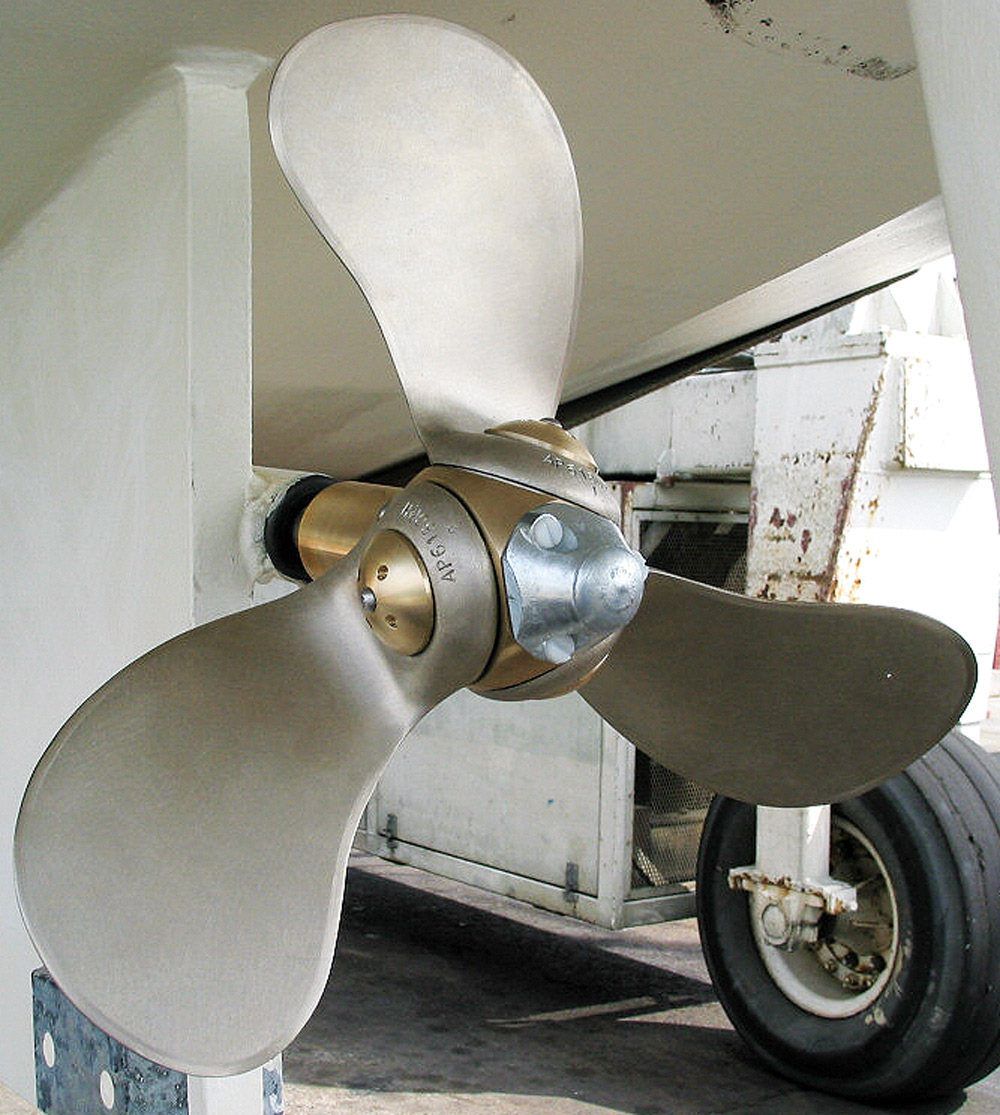 What size propeller do I need?

The optimum size propeller - whether fixed, folding or feathering – is calculated from the following inputs:

This calculation is done with developed software by the propeller manufacturer.

A sailboat’s displacement and waterline determines it’s hull speed (approximately √LWL x 1.34) which is factored into the calculation needed to move the boat through the water.

To achieve displacement hull speed sailboat manufacturers will specify an engine based upon a rule of thumb “power to weight” ratio of 4 to 6 hp per ton. The hp and torque produced from the engine crankshaft rotating is expressed as a maximum (or rated) RPM and a suggested RPM to run continuously of between 60 to 80 percent of rated RPM. The engine’s output goes nowhere until a optimum propeller is installed on the propeller shaft and does the work to absorb and transmit the torque into thrust. The engine turns the propeller shaft via the transmission or gear box.

How to Identify Your Gearbox Ratio

The gearbox ratio is usually stamped on a tag or plate on the top or side of the gearbox, expressed as a ratio or number (example: 2.64:1 or A–2.64). The best method to get the actual ratio is to use your cell phone camera and take a photo of the plate on the transmission (beats hanging upside down reading it with a mirror and a flash light).

If gas or diesel engines had no transmission reduction, i.e., one for one ratio (1:1) and the crankshaft and propshaft turn at the same RPM, you would get the maximum RPM in your propeller and the maximum final speed, however you would have to use a very small diameter propeller and get minimal no thrust. The exception is an electric motor without a gear box turning at lower shaft speeds required for propellers (1000-1600) enabling a larger diameter.

Too small a propeller will produce very low torque, poor thrust and low speed at the stated RPM, the “egg beater” or “under propping”. If too large the propeller will absorb the hp too early and hold the rpm down, not reaching the specified RPM resulting in “over propping”.  The thrust generated will be without the desired torque from full hp and could possibly damage the engine from unburnt fuel (not good for the cylinder walls) and in the case of new electronic controlled engines, could possibly shut them down.

This is why engine manufacturers require that propellers be properly sized to absorb the engines’ hp to reach its specified RPM. The propeller size must allow the engine to reach this “propping rpm” in order to be approved for use on its engines. In some cases where customers wish to limit engine speed and noise, propellers are sometimes sized to the engine cruising speeds, meaning that can be slightly ‘over-propped’ and the engines will never achieve their maximum rpm in gear. 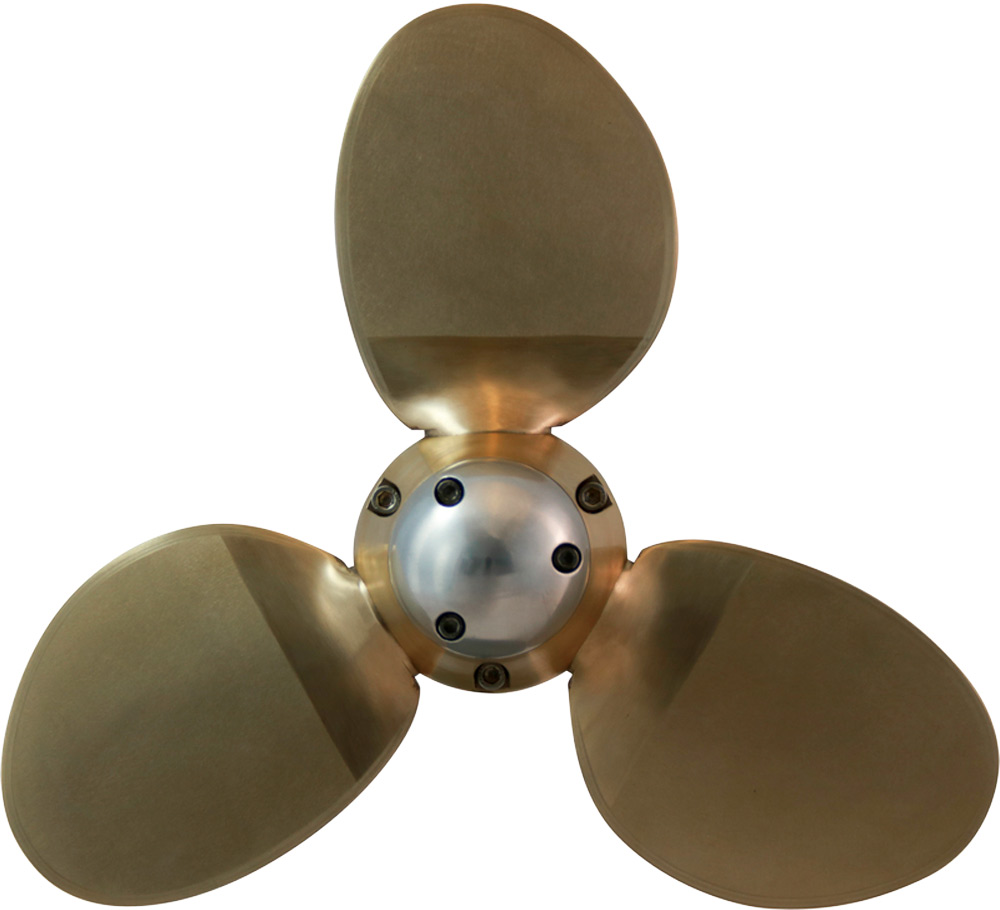 The optimum size of your propeller will be presented in terms of diameter, pitch, the number of blades, and the direction of rotation, RH (righthand) or LH (lefthand), of your transmission.

Diameter is the single most critical factor in determining the amount of power that a propeller absorbs and transmits into the water - the amount of thrust delivered.  The larger the diameter, the greater the efficiency.  A small increase in diameter dramatically increases thrust and torque load on the engine and shaft. Just like if you have a high powered engine in a car, you need wide tires to get the HP to the asphalt. The reason why dragsters have very wide rear tires.

Pitch is the distance a propeller will advance through the water in one revolution, visible as the angle of the blades away from the axis of the propshaft. An increase in pitch allows the propeller to grip a larger amount of water putting more load on the engine which reduces its maximum RPM. Likewise a decrease in pitch reduces grip in the water lessening the load on the engine which increases its maximum RPM.

The GORI 3 blade has a 2nd pitch in forward called ‘Overdrive’ and Autoprop is automatic variable self-pitching which gives more thrust and more speed at the cruising rpm or when motorsailing.

Large blade surface area (wetted surface) will translate to more thrust (power) at any RPM in the engines’ power curve. Blade Area Ratio (BAR) represents the relationship between the size of the propeller blade and its diameter; it is equal to the blade area outside of the hub, divided by the total area (πr2) of the disk/circle of the propeller.

A 2-blade propeller is the most efficient, but there is a limit to how much horsepower you can put to the water on 2 blades. With an engine of 30hp or more, a 2-blade propeller does not have enough blade area to fully use the hp available from the engine and put it out as thrust into the water, it lacks the “grip” in the water.

A 3-blade propeller has a greater BAR than a 2-blade propeller and therefore develops more thrust (power) at any rpm.  The boat will accelerate quicker / stop faster and more importantly, punch through waves in a head sea/head wind/against the current a lot better - maintaining boat speed and not slowing.  A 3 blade is recommended for the average 36 footer and over 30hp.

How much room do you have for your propeller?

Your propeller is mounted between the hull and rudder which may have limited space. A feathering propeller’s blades surround the hub similar to a fixed propeller, or they are just aft of the shaft end, so they do not take up much room fore and aft. A folding propeller in its folded position requires space and may not fit in many apertures between the keel and the rudder or skeg. In addition to the space to operate – open and close – tip clearance of no less than 10% of the prop diameter is required.

If you are replacing your engine, you have the best opportunity to more properly power your boat. By work forward, starting with the largest diameter propeller you can fit, then choosing the gearbox to suit this diameter, you can achieve the solution for optimum thrust. These factors will determine the choice of engine, based on the engine rpm and available gearbox ratios. You do not want the propeller “getting the shaft”.

With the above knowledge and your boat and engine data, you can now contact the propeller manufacturer/distributor and on your way to giving you the best of all worlds for performance sailing, club racing, motor sailing or motoring.