If music is how we feel math, then sailing is how we live physics. And sail trim, like playing an instrument, is our touchpoint with the medium. In fact, apart from steering a sailboat, which is one of the most empowering experiences a person can have, the act of trimming sails is the most important and telling work a sailor will do. And it is the most complex. I hope here to break it down into basic English while also going beyond the basics. 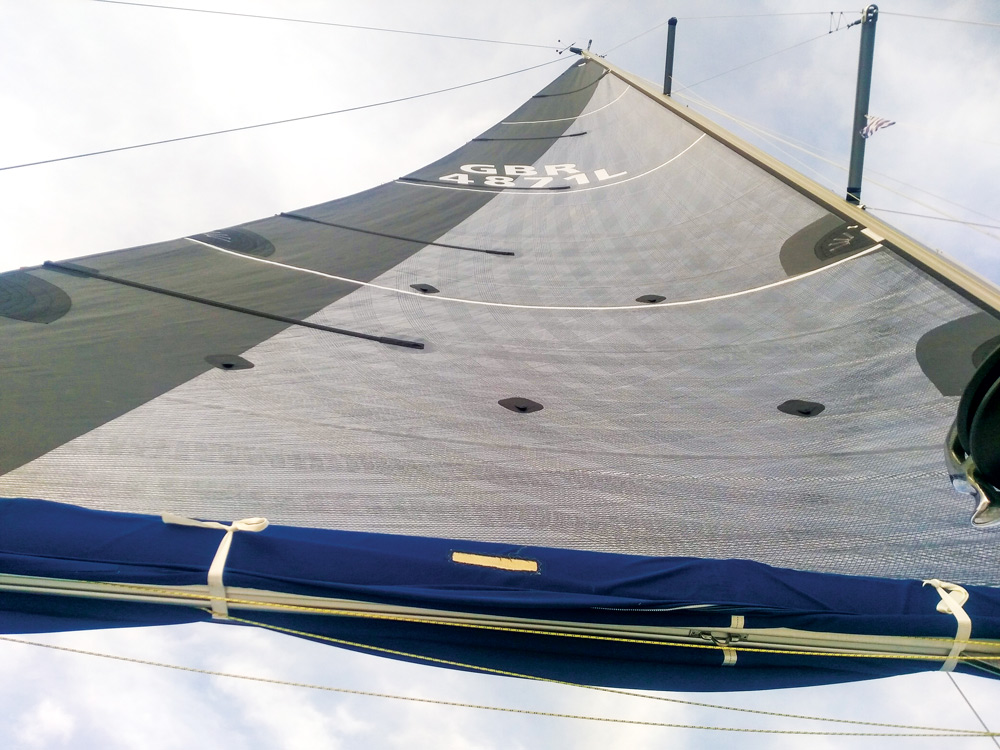 Speed stripes, the white stripes seen on this mainsail, can help you judge depth and shape. There are many ways to control the shape of a mainsail to optimize speed, angle or control, including halyard tension, cunningham, outhaul, boom vang and, of cours

Naive cartoons of sailboats often seem malformed to folks who understand sailing’s basics. Sails are not triangles as they are often depicted, and they are never flat. Instead, sails are better described as arcs that alter, temporarily, the natural flow—the direction and speed—of the wind. A sail’s shape is best imagined by looking down from above or seen in the real world by looking up from below. The technical term for a sail is a “cambered foil,” though it is not a human invention. The organic shape exists in cross sections of bird wings and tree leaves, among other evolved forms. And the wind never fills or pushes foils, but instead, always attaches to and flows under, over or around them, like a river stream bending around a semi-submerged rock. That undisrupted bending translates to energy as long as the flow of air remains attached to both sides of the foil.

A sail trimmer tries to understand, through visual cues and other sensory clues, whether or not the foil is working as it should. Engineers call the critical measurement of this performance “lift” and “drag.”

Lift is the energy that can be converted (when the sail is married to a keel or centerboard in the water) into forward motion. Drag does the opposite. Like friction, drag wants to slow down and stop anything from moving. The laws of aerodynamics say that you can’t have lift without some drag. The other key rule is that none of this will start unless the “angle of attack” is set correctly. Angle of attack is the technical term for pointing the leading edge of the sail at the apparent wind so as to initiate the flow—bending—that generates the power.

Complicating the discussion is the fact that the shape of a proper foil is not symmetrical, that is, the deepest point is not at the center of the arc’s curve, but closer to the leading edge (where wind first attaches) and is flatter on the trailing sections. The location of the deepest point is called draft. Most trimmers try to position the draft just forward of the middle of the arc, again, in a quest to maximize lift and minimize drag.

Incidentally, the feeling of sailing is rarely one of being pushed, but instead, of slicing the wind. The leading edge of the sail is the knife blade, and the latter two-thirds generate the energy. This feeling is especially noticeable when sailing angles are higher than a beam reach, but as far as the physics go, every sail you will set is a foil and your job is to get it foiling by setting and adjusting angle of attack.

Visually, flow is confirmed by the telltales, so the trimmer’s first order of business is to make certain that they are all flowing properly. When all telltales flow, the angle of attack is generally correct. Angle of attack can also be judged by comparing the first 15% to 20% of a sail’s seams or speed stripes to a masthead Windex. If the lines are parallel, angle of attack is set correctly. It is easiest to understand sail shape by looking up or down at sails. An overhead view offers a clear look at the draft of both sails. The main outhaul is slightly cracked off to match the moderate wind conditions and both halyards are taut, without bein
UK Sailmakers photo

Finally, a sail wants to be smooth, not wrinkled or creased. Any bump in a foil creates turbulence, disrupting flow and slowing things down. Generally, a wrinkle means that something isn’t tight enough, like a halyard or a cunningham, so a trimmer will tighten to remove the flaw, taking care not to overtighten.

Once underway, a sail trimmer might notice that the telltales are suggesting a different course than the driver is driving. Flow lost on the leeward side or the trailing edge of a sail indicates that either the sail should be eased or the driver should head up— drive a higher angle. Flow lost on the windward side suggests that the sail should be trimmed or the driver should steer down (stop pinching).

Shifting gears: To power or not to power

Since Mother Nature has the capacity to overwhelm anything, trimming when there is too much wind is about grabbing just enough energy to move while shedding the rest in order to avoid being overpowered. More often however, there is less energy in a local breeze than a boat is designed to handle, and then, trimming is about getting the most from it by using small bits of wind energy as efficiently as possible to make the most speed.

Novice sailors are often taught to raise a sail with a halyard and then trim it in using the mainsheet until the telltales fly and the boat moves, and that will technically work. What the novice often ignores is shape control for power, jumping quickly to the reef as a means for depowering. Reefing is not sail trim, it is boat handling, and there are many steps to take before reducing the amount of sail that is set.

Advanced trimmers deliberately and continuously adjust sail shape. Using performance feedback, they decide how deep or flat the sail should be, since depth, (also called camber) generates more or less power as it forces the wind to bend more or less dramatically. The deeper the shape of the sail (this can be seen by looking up from the center of the boom and eyeing the horizontal seams from the luff to the leech), the more lift it can theoretically generate.

However, there is a point of diminishing returns in which a too-deep sail delivers more drag than lift. Sails are cut with a designed shape that assumes maximum depth, but older, baggier sails are often deeper due to stretched seams and therefore prone to drag. In an airplane, too much drag results in a stall, and it isn’t good. Sailors feel a stall in excessive heel, weather helm, slowness and side-slip. Again, most novices are taught to ease the sheets in situations like these, which twists off the top of the sail to lose some lift. This technique will work, but often at the risk of sailing angle. A better option would be to simply depower the sails by taking out depth or flattening them, which sheds drag first and lift second, while modestly (and favorably) narrow the angle of attack. This allows a boat to carry more sail, point higher and sail with less heel while still meeting target speeds.

Based on boat speed and boat feel, a helmsperson may call for more power or less power, which, in the sail trimmer’s world, means a sail with either less or more twist, or better, a deeper or flatter sail. On the mainsail the tools to do this deepening or flattening and to keep flow attached are:

• The outhaul, which controls the depth or flatness of the lower third of the sail.

• The main halyard and cunningham, which together control how far forward the draft will set (creating that ideal cambered foil shape).

• The traveler and vang allow a sail to be eased from the mainsheet without twisting, enabling the trimmer to adjust angle of attack without depowering.

• The mainsheet, which controls angle of attack and twist.

• The backstay, which when available to be tightened, bends a properly tuned mast, pulling the luff forward, thereby flattening the remaining top two-thirds of the sail. Of course easing the backstay will do the opposite: deepen and power up the sail to its designed shape.

The jib responds to similar tools, though since it doesn’t have a boom with an outhaul, it depends upon the position of the jib fairlead to determine shape in the lower third. Moving the fairlead aft will flatten the lower third and also induce twist and narrow angle of attack, therefore depowering the jib.

The way in which molded sails are made can help you think of them not as a flat triangle but as the cambered foils they are.
North Sails photo

The jib halyard controls draft and a jib sheet or barberhauler control twist. And the adjustable backstay, if the boat has one, also depowers the jib by tightening headstay sag, thereby flattening the forward-most foil. This is a point worth repeating: A backstay on a boat with a bendable rig does dual duty, flattening both the main and the jib when on, and deepening both the main and jib when eased. Our team often used the backstay as a one-touch multifunctional control before we do anything else. It’s like having a sixth speed on a manual transmission car. If your boat’s rig doesn’t bend, an adjustable backstay will still stiffen the headstay, taking out sag, thereby de-powering the jib, so use it.

Finally, this quest for shape is not exclusive to upwind sailing. Indeed, any point of sail apart from the lowly dead-downwind, wing-on-wing configuration is an effort to trick wind to bend around a curved shape. So spinnaker sailing is just as much about foiling any other point of sail. The difference is that the spinnaker starts with a much deeper (and therefore powerful) shape and is often much bigger. This is possible because apparent winds decrease as the boat turns and speeds away from the wind and more power is therefore called for.

At any sailing angle, the trimmer’s job is the same:

1. Using speed stripes or seams to see shape, make a proper foil by setting camber and the fore-to-aft draft position in order to create lift and minimize drag.

2. Set and adjust the angle of attack continuously using telltales and a Windex, if one is available.

3. Power up and down by changing twist and shape using the appropriate sail controls.

4. Talk with and listen to the helmsperson and other cues to make these changes.

• Learn a bit about aerodynamics including Newton’s Third Law of Motion and Bernoulli’s Theory of Flight at this link: https://skill-lync.com/projects/To-Calculate-the-Lift-and-Drag-Force-on-an-Airfoil-85998

• If you have an iPad, download the inexpensive “Wind Tunnel” app, which lets you create and test a variety of foil shapes while measuring lift and drag.

• Go sailing with someone with extensive sail-trimming experience and ask lots of questions.