When it comes to refitting your boat, whether it’s for the upcoming season or to upgrade it in general, I’m happy to report (from more boats than I’ll admit to), that there is one item that doesn’t cost you a dime. It won’t require a visit to your local marine hardware store and, even better, it’s one you already have.

I knew what it was in general, but I’d never heard the term until I went to Lake Tahoe to visit Bill Harrah. You know him for his Harrah’s Casinos, where I’m sure many readers have left enough money for him to build not only his sprawling gambling empire, but a world-class collection of classic cars.

What many don’t know is that he also had vintage boats, including a 55-foot yacht on which everything that wasn’t metal was varnished. That meant the entire topsides (110 feet of hull for the mathematically challenged).

It was impeccable and, when we went down to see the boat, his crew had shopping carts filled with freshly laundered Turkish towels (he was a hotelier, too) with which they were removing every droplet of morning dew before it could dry on the varnish.

But the astounding thing about this yacht named Thunderbird is that every year it was trucked through the mountains to his shops in Reno where each layer of varnish was painstakingly removed. 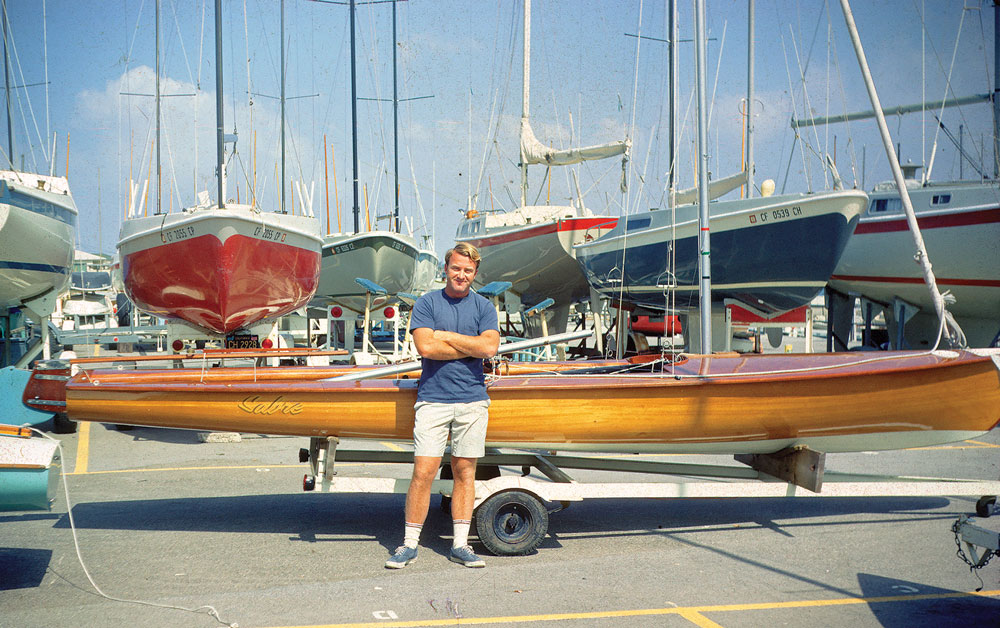 As his captain told me, Mr. Harrah only allowed the “educated thumb” to be used for both the removal and the sanding of the hull, which meant no sanders. It was all done by hand. And then, 18 layers of spar varnish were, again using the educated thumb. No sprayers, just brushes in smart hands.

And thus I learned about the educated thumb.

Some time after this, I rescued a tired Flying Dutchman that had been slathered in white house paint using a 99-cent throwaway brush. It was appalling, especially since I knew there was flawless
mahogany underneath.

And so I tackled the project of removing all the white paint, sanding endlessly, staining and laying on coat after coat of spar varnish. While a Dutchman is just 20 feet long, I quickly realized you can measure the area of the foredeck in acres. Throw in the exterior hull, and the inside, complicated by stuff like a centerboard, ribs, and things I still don’t fully understand, and that’s a lot of varnish.

It was at this point that I became a connoisseur of varnish brushes. I rivaled wine aficionados but not for the “nose” or the “legs” of a fine wine. No, I would rate a brush by the “gentle split ends,” the “impeccable shaping,” and the “perfect flagging” of the bristles.

I will share with you that I am a Purdy man. I like Purdy ox-hair varnish brushes, I like the shape of their handle in my hand, and I appreciate the way it lays on varnish. If it were a wine, Wine Spectator magazine would score it a 97.

But enough about me. How do you develop an educated thumb? By running it across varnished surfaces, that’s how. Even an absolute cretin can tell the difference between a smooth coat of varnish and one that either has dust particles (it feels like sandpaper), rough overlaps (someone let the varnish tack off and then put another layer over it), or (worst of all), you can feel the wood grain through the varnish. Tsk, tsk.

The African Queen wasn’t Humphrey Bogart’s favorite boat—he owned the 55-foot yawl Santana about which his wife, Lauren Bacall, noted, “The only cause my husband ever gave me to be jealous was not of a woman, but a boat—a racing yacht called Santana.”

Santana was maintained by Carl Peterson, a gruff Dane, who kept the varnish sparkling in the California sun. At one point, learning that Bogey and Bacall would be out of town shooting a movie, he decided to varnish the cabin table. Not a big project so, after prepping it, he laid on what he thought would be a flawless coat of varnish.

But when he ran his educated thumb across it the following day, it was marred by dust. “Must be your hair,” said a friend on a nearby boat, so Peterson put on a hair cap like a surgical nurse.

Another coat of varnish, and the same result—a finish marred by dust apparent to an educated thumb.

“It has to be sanding dust from your clothes,” counseled another dock friend. Since the Bogarts were gone and the table was still inside Santana, Peterson decided on a solution. He would varnish naked.

Before I go further, Carl was a robustly large person and as hairy as an ape. So, he stripped off his clothes, carefully showered, and proceeded with another coat of varnish. He was lying on his back spread-eagle on the floor touching up the edges when the cabin door opened.

It was Lauren Bacall, back early from the movie, who stepped down to find this immense gorilla sprawled totally au natural. I know you have the mental picture.

But, with great savoir faire, she stepped back, apologized for stirring up any breeze, and closed the hatch after her.

The moral here is to pay attention to your educated thumb when it comes to varnishing and re-varnishing. Do it until your thumb is happy with the finished surface. Use a great brush, prep the surface, and don’t let anyone surprise you.