Home . Articles . Columns & Blogs . On the Wind . Don’t waste good champagne to christen a boat with a dreadful name

It was a beautiful morning and I was rowing our tender ashore to grab a Sunday paper. I like rowing, and the fiberglass tender is fun for rowing (unlike those baggy gray inflatables), and I didn’t want the fumes and noise of an outboard. That’s a rant for another time.

Halfway there, I came across a lovely classic yawl, probably 40 feet, and she was just gorgeous. Perfectly curved sheer, chrome dorade vents facing into the breeze, varnish that looked like poured syrup. The mainsail was carefully harbor-furled on the boom (no stacking system) and the jib was tidy in its bag on the bow (no roller furling). Another future rant.

I circled the yawl but, when I got to the wineglass stern, the name made my heart sag. This otherwise elegant yacht was named Wet Dream.

What in the heck has gotten into people? Some of the names I see on boats are not just dreadful, but vulgar and embarrassing. I used to write them off as being on fishing boats, but I’m seeing sailboats named Passing Wind or Aft Hole and, like newscaster Peter Finch in Network, “I’m mad as hell and I’m not going to take this anymore!” 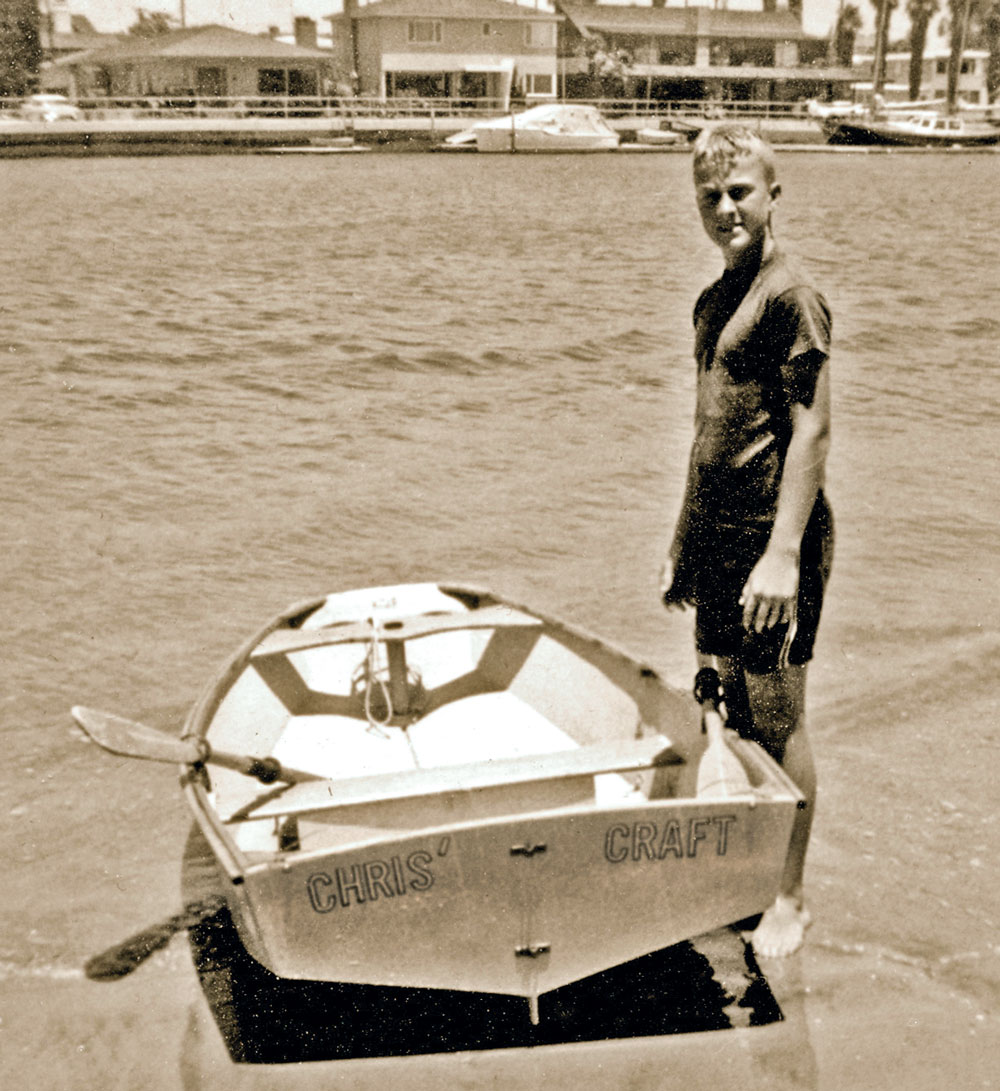 The author with his embarrassingly named Sabot back in the day.
In full disclosure, my very first boat was an 8-foot Sabot on Alamitos Bay in California I named Chris’ Craft. I am embarrassed by the name to this day. But that does not forgive the rude names I’m seeing. Have a little respect, folks. A sailboat, any sailboat, deserves better.

Even Greta, the normally unflappable editor of this column, sounds like Peter Finch as she edits racing results from around the world. “Instead of Intrepid or Endeavour, we have Oracle and United Emirates,” she said. “And instead of names like Merlin, Williwaw, Windward Passage and Kialoa, we have Alfa Romeo and Investec Loyal, whatever that is.”

At that point, I can see her throwing her blue pencil across the room.

All of these owners seem to view boats as moving billboards on which to promote the owner’s business and I lay much of this nom foolery at the foot of Larry Ellison, who not only took over Golden Gate Yacht Club to front his America’s Cup challenge in 2010, but whose yachts celebrated his business (Oracle) and sponsor (BMW).  Yes, BMW Oracle is blatant but he had a vision that he could turn the America’s Cup into a television spectacle to rival NASCAR. Then the New Zealanders got into it with Emirates (the Dubai-based airline) and we’ve clearly lost our way.

I liked Intrepid and Gretel, and Courageous. Even Il Moro di Venezia was a reference to both Shakespeare’s Othello and Venice, the team’s homeport. Enough about the America’s Cup, though; that’s yet another rant about something that has lost its way.

According to Boat U.S., the most popular boat name in 2021 was Andiamo (meaning “let’s go”) in Italian, which gives me hope for a sea change in naming. The second most popular was Social Distancing, and we all know what that means.

Others in the top 10 include Freedom, Serenity and Grace, all of which I find both elegant and acceptable. Knot on Call clearly appeals to medical folks, Island Time is a dream, and Mojo, well, I’ve always known sailboats have a magical power over us. Fred’s Welding Supply didn’t make the list.

Boat naming dates back hundreds of years to when seagoing vessels were named after gods to protect them from bad luck. As a general rule, it doesn’t really matter how (or, within some boundaries, where) you put the name on your boat. The stern is the most obvious, and next to the cockpit is a close second. I’ve always been a fan of painted-on names or, even better, gold-leafed names on a varnished transom, but don’t be shy about stickers. A whole cottage industry has sprung up that will deliver a large decal in a zillion different styles.

There is, however, a ritual that must be followed if you don’t want to offend Poseidon and his pals. Gather a few friends on a weekend (Thursdays and Fridays are bad luck,) and keep the name of the boat hidden until completion of the ceremony.

Red wine was the original christening liquid, and it was supposed to simulate the sacrificial blood of slaves over which the Vikings rolled their boats. Champagne, however, is a much more civilized offering and one that the gods seem to enjoy.

Make sure everyone has a bit of bubbly, make a toast to the new boat (“Fair winds and safe voyages”), and then pour some on the bow while naming her. Champagne bottles are notorious for not breaking (bad luck) or for damaging the hull (expensive).

Once done, toast the four winds by facing north and offering a splash to Boreas, then west for Zephyrus, south for Notus, and east for Euros. Remove the covering over the name, and your new yacht is ready to set sail.

If you think that seems a bit much work as well as a waste of good champagne, remember the ship that was never christened.