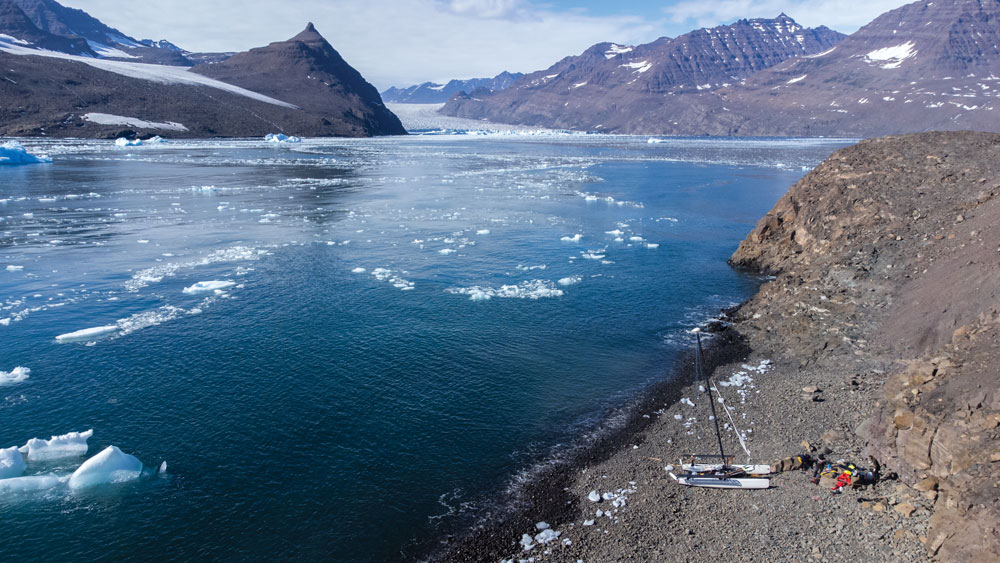 Sedna is left on shore at low tide in Aunay Bay.
Nicolas Marcillaud

It took us another four days to reassemble the catamaran, repair the float damaged by transport and add a bilge pump system. One evening, we finally pushed Sedna into the water. The wind was against us and the day was getting dark fast, but we couldn’t wait to get moving. We sailed through the fleet of Lasers and Optimists racing in the harbor.

We sailed for three days up the Icelandic coast, encountering just about every sailing condition, testing the boat in heavy weather and testing us in the calms. We arrived in Isafjordur, on the northwest coast of the island with an impressive list of problems to solve. The floats were leaking, the waterproof barrels were not holding well, and the reefing system was laborious. With the satisfaction of having sailed Sedna offshore for the first time came the doubts about our preparation. Three days later, after hours of work, we put on all the layers of clothing we had and hoisted the sails, setting off for the north coast of Iceland.

A huge black cliff guarded the entrance to the great fjord of Isafjordardjup. Some people can be worried by the scattered clouds covering the vertical cliffs, the constant wind and the sinister cries of the seabirds. But I was excited. The arrival brought a deep sense of relief and all doubts evaporated.

That evening as the sun was soon to set, the breeze channeled by the fjord gently pushed us away. Turning our backs to it, we resolutely set course north toward Greenland, a 200-mile passage that we hoped to complete in less than 48 hours. According to the weather forecast, we expected calms midway and 20 knots of wind with snow as we neared the coast of Greenland coast.

We ate up the miles sailing under spinnaker through the night. At dawn, the wind decreased barely filling the spinnaker. Luckily, a following swell pushed us in the right direction. The next morning, I was disappointed by our headway. The wind was gradually picking up and we found ourselves upwind in a short sea. Sedna, well loaded, pierced the crest, sailing fast.

With the rising sun we first caught sight of the huge mountains of Greenlandic, 50 miles away, and encountered the first big icebergs. The Icelandic coast was impressive but it was nothing to compare with this gigantic coast of Greenland. As we approach the coast, we feared for a moment that the low-pressure system would deepen. As we got closer, the wind veered and we easily reached to the spot that seemed, according to satellite maps, the most hospitable on this stretch of coast. At 69 degrees north, we entered Aunay Bay, and ran the boat aground on a tiny island. As soon as our feet hit the ground, we opened our drysuits and took off our thick neoprene hoods. Our skin breathed again in the cool but sunny air as Greenland kindly welcomed us.

The steep coast reminded me of Svalbard, but the fjord was different. The water was clear and reflected the contours of the mountains. The light was  turquoise and pink, and mingled behind the horizon that was lined with huge icebergs quietly making their way south. Where did they come from? I couldn’t imagine a glacier big enough to drop off such huge pieces of ice.