Home . Articles . News . Afloat . Sailing to Down Under with the Devils

Sailing to Down Under with the Devils

By David Liscio
Every so often, life drops something out of the blue in your lap.

That's how I ended up crewing aboard a supermaxi last month off the coast of southeast Australia, surfing the waves toward Tasmania as part of the annual Rolex Sydney-to-Hobart Yacht Race. 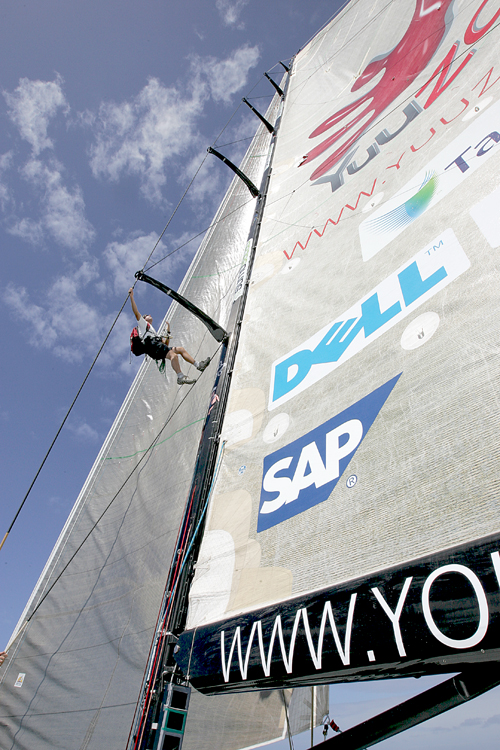 Barely three weeks before the start of the race on Boxing Day, December 26, an email arrived from Tourism Tasmania. I thought it was SPAM. My first reaction was probably much like yours-Tasmania? Isn't that the place where the Tasmania Devils live? Aren't they the nasty little cartoon creatures that the art department at Warner Brothers Studios created back in the mid-1950s?

Devils aside, the folks from Tassie-as the locals refer to their island state-were eager to put a sailing journalist aboard one of the larger boats in the race fleet. Ludde Ingvall, skipper and owner of the 90-foot YuuZoo, the smallest supermaxi registered, had agreed in an effort to shed some limelight on his boat, the media company that partially sponsored it, and Tasmania in general.

I'm used to sailing aboard racing or cruising boats in the 35-foot range and chartering yachts well over 40, but not a supermaxi with a canting keel, canard, barrel-sized winches and sails huge enough to drape my house in New England.

It wasn't simply a matter of getting accustomed to the size of the equipment because everything about big boat racing is, well, big-big boats, big investments, big seas, big egos. It was the immediate evidence that this would be no pleasure cruise. The cockpit cushions had been left behind, along with the galley table and the privacy screen for the head. Instant soup was the highlight meal with choice of beverage-water or canned soft drinks. Hard candy was dessert.

There was also the obstacle of the Aussie accent. Occasionally during clutch situations it was difficult to understand just what was being said, and that was compounded by colloquialisms. The cunningham, for instance, was referred to as the sly pig. It marked my introduction to Aussie humor. Then there was the whomper, the name given to the largest chute, and torch, which is English-Aussie for flashlight. I also had to quickly learn the nicknames of the 20 other sailors on board because nobody is called by their given name. Besides, four of us were named David and that would have fueled plenty of confusion on deck. 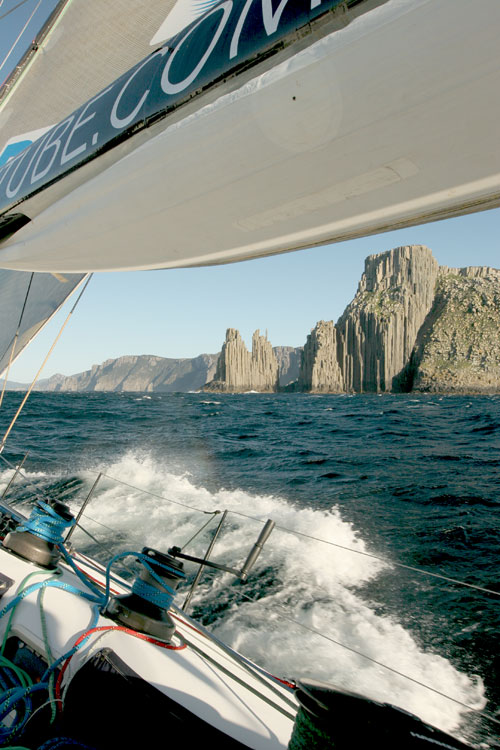 Instead we called out Rooster, Guns, Brownie, Youngy, Swanny, Doc, Witt, Manny, Bowie, Boxy, Suds and Beluga. I'm sure you got the idea. Most of the guys called me Yank because I was the only American on board. The skipper was a Finnish-born Swede, Doc a heart surgeon from Italy, and Maarten Voogd, the boat designer, a native of Holland. Everyone else was Australian.

It took us just over three days to sail from Sydney to Hobart. I didn't know what to expect on arrival, other than cheering crowds because we were seventh over the line among 100 boats and the Aussies are simply nuts about sailing. If this race were in America, we might attract a crowd of spectators, but in Hobart a full-fledged celebration was under way, not only at the docks but throughout the picturesque harbor town. We were the source of admiration. Recognized by our Rolex or YuuZoo hats or shirts, strangers stopped us on the street to hear more details. Congratulations, they said, you did it. Several pointed out that arriving in Hobart by sea was the best way, so that you get to see the majestic cliffs, an expanse of rock called the Organ Pipes, the historic Iron Pot navigation light, the tidal pull of the Derwent River, and the shadow of Mt. Wellington providing a dramatic backdrop to the town.

Hobart was anything but what I anticipated. It was quaint and clean in the way that Bermuda can be, but beneath that veneer is a pride and sophistication that includes a wide appreciation for art, music, food and wine.

Since the annual waterfront festival coincides with the race, it was an opportune time to try Tasmania's many fine wines-especially the Rieslings and Pinot Grigios, and some of the full-bodied blended reds. Only one true Cabernet Sauvignon was available, from Drew Wines, because Tasmania doesn't get enough sun to grow that grape with success. Robert Drew just happened to buy a small plot of land where the conditions are ideal.

I stuffed myself on organic cheeses like the Bastard, local cherries and berries, fresh oysters and tender beef. I also spent a few hours drinking with Bill Lark, who owns the Lark Distillery and makes some of the most drinkable whisky on the planet. When I walked into the whisky bar, which serves 140 brands, one of Lark's employees was holding up a handful of dark peat and lighting it afire so that customers could inhale the sweet aroma. It was a smart way to explain how the smoky taste gets into Lark whiskies. If I had had more time, Lark offered to take me to his bog to dig peat and to a favorite stream for some fly fishing, his other passion. Unfortunately, this was a whirlwind trip and no visit to Australia would be complete without seeing a kangaroo up close and personal, and maybe even a devil.

Nicola Hawkins, my Tasmanian guide, was a wealth of information. She drove us to Bonorong, a wildlife preserve less than two hours from Hobart, where the menagerie of marsupials running about is jaw-dropping. A kangaroo approached and nuzzled its face into my armpit, its babies peering out from the pouch. A koala sat patiently in the crotch of a tree, only feet from where an 80-pound wombat was demonstrating to one of the park workers just how stubborn it could be. We saw wallabies, echnidnas, a crazy assortment of birds, and finally, the devils.

Greg Irons, an expert on Tasmanian Devils that now face extinction, emphasized that these creatures are misunderstood. Yes, they're carnivores with a killer bite and a scavenger's appetite, but they tend to keep to themselves, avoiding human contact in the wild when possible.

The devils that Irons has raised from birth at Bonorong are trusting, so that he can hold and pet them. But not every devil is docile as we found when Irons pushed the end of a branch into the hole of a tree. Out sprang two devils, mouths wide open, teeth flashing, emitting the growling scream that earned them their name among the earliest settlers.

By the time I checked out of the Henry Jones Art Hotel and was headed for the airport and a flight back to Sydney, the last of the race boats were coming into port. Some had been at sea for over five days, slowpokes in terms of the race, but heroes nonetheless for sticking it out. As one might expect in Tasmania, the friendly crowd was there to greet them.