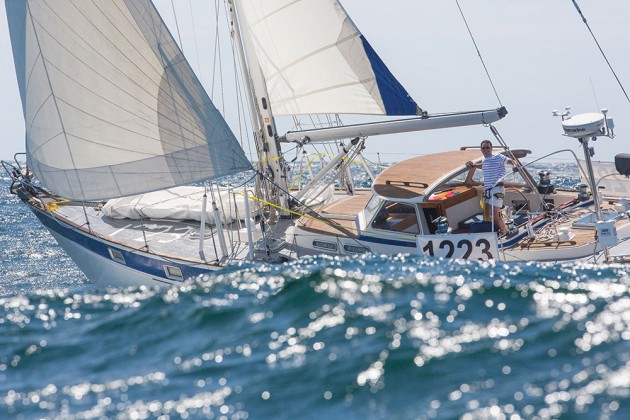 Nearly all 23 solo sailors who set out from Newport, Rhode Island, in June racing the Bermuda One-Two had offshore sailing experience, but several had never attempted a solo bluewater passage. The annual race sails singlehandedly from Newport to Bermuda, and doublehandedly on the return leg. And before the first leg was finished in Bermuda, six boats turned back and one was presumed sunk after its skipper was rescued from the sinking hull, the keel rattling and threatening to detach. Yet another sailor extinguished an onboard fire while his competitors grappled with torn sails, broken booms, twisted drive shafts and other difficulties exacerbated by rough sea conditions.

Wyoming resident Dan Alonso, skipper of the Hallberg-Rassy 49 Halcyon, was among the first-time solo sailors in the fleet. He heard the distress call from skipper Jan Steyn aboard the Columbia 32 Carbon Solid Air. It was the third day of the race and the fleet was south of the Gulf Stream, about 250 miles from Bermuda. Steyn had broadcast by radio that his keel seemed about to fall off. It wasn't promising news, given that another Columbia 32 Carbon had been involved in a tragic incident near San Francisco in March. In that case, Craig Williams, 36, of San Diego, drowned when his boat Uncontrollable Urge broke apart on the rocks. Crewmembers rescued by helicopter told authorities the boat's rudder failed.

During the Bermuda One-Two, in addition to Alonso, three other skippers monitored Steyn's hail for help: Michael Millard aboard the Quest 30 Wildeyes, Michael Stevens aboard the S2 9.1 Bent, and Michael Schum aboard the C&C 110 Kontradiction.

Steyn, who lives and sails in Youngstown, New York, had no steerage. Even with engine running, the wind was taking him northeast at 2 knots. Millard aboard Wildeyes was first to answer but was having problems changing direction. After some tense communication by SSB radio, it was decided Halcyon would come to Steyn's aid, according to Roy Guay, the race organizer in Newport. It was approximately 5 p.m. Four hours later, with darkness blanketing the sea, Alonso was alongside Solid Air, preparing his mind and body for the daring rescue.

When Alonso first heard the request for assistance, he was concerned about being 250 miles from Bermuda in the middle of the ocean. Coming to the aid of a fellow mariner would also mean giving up his favorable position in the race.

"Assistance? This guy is leaving his boat. He's not looking for a spare fan belt. It's blowing hard and the seas are big. But something bad has happened and he's abandoning ship. My race is done. This guy needs help," Alonso said.

He doused the genoa, stowed the mainsail and set a course for a waypoint based on position information Steyn provided. Halcyon broached repeatedly in the wild sea, heeling 30 to 40 degrees, its autopilot malfunctioning. Alonso steered manually, flying only his storm sail. Seas were 8 to 12 feet, with a 30-knot wind.

"Halycon is surfing down each wave," Alonso wrote in a personal narrative following his return to land. "It's hard to keep her straight. She wants to veer off. How the hell am I going to get this guy aboard? I know the LifeSling drill, but really?"

As Alonso approached the waypoint, it became apparent the latitude and longitude given had been inaccurate. Solid Air was actually 8 miles upwind in the direction from which Halcyon had just come. It meant reversing course and slogging into the wind and sea as the sun began to set.

Schum, aboard Kontradiction, was also moving closer with intent to join the rescue. All were beyond range of helicopters. Alonso dropped the storm jib and began motoring up wind, the boat pitching crazily in all directions. He suggested Schum not intervene because it might lead to a collision, but asked him to stand by. Steyn considered putting out fenders but Alonso told him to forget it and prepare to get wet.

"I'm suddenly terrified of the pickup and I can't find him," said Alonso, who requested Steyn shoot off a flare. Steyn waited until Alonso was closer. Meanwhile, in his effort to assist, Schum lost his foresail and the jibsheet fouled his prop. At that moment, Alonso was certain he faced two rescues.

"I saw it. Thank God, I saw it. What a beautiful thing," Alonso said.

A second of Steyn's flares soon exploded overhead. Alonso got battered about each time he shifted focus from helm to compass to get a bearing. He instructed Steyn to switch on every light aboard to make Solid Air more visible.

Fearing Solid Air might get blown down on Halcyon, Alonso approached from upwind. He was about 200 feet away when he lost sight of Steyn in the cockpit. "All of a sudden he's gone. He was just right in front of me and now he's gone. Lost in the dark," he said.

Halcyon veered out of control once Alonso left the cockpit to get a better look. The boats were about to collide and literally seconds from impact when he spotted Steyn, who had vanished below deck to turn out the lights and secure the cabin.

Solid Air had its stern to the wind and was lurching oddly.

He discarded the polypropylene line attached to the LifeSling and substituted the spinnaker sheet.

"I wanted the heavier line for winching and more mass to throw," he said. "The line that comes with the sling floats and the spinsheet doesn't."

Although there was an increased possibility the heavier line might sink and wrap his prop, Alonso carefully coiled it on the stern quarter. He drove Halcyon directly at Solid Air, turning the helm sharply to port when he was about 40 feet away. When Halcyon's stern was 20 feet off, Alonso threw the LifeSling as hard as he could. It struck Steyn in the chest.

Halcyon broached as Steyn donned the LifeSling. Alonso wrapped the spinsheet around a winch and hit the power button, launching Steyn into the sea and skipping his body across the water like a game fish on a hook. It looked as though the plan was working until the battery ran out of juice and the winch died. Alonso began hand cranking, but the going was tough. He attached and lowered the boarding ladder, but Steyn, who was getting slammed by Halcyon's hull, couldn't reach it. With every last bit of energy in his body, Alonso cranked the winch until Steyn was able to reach the ladder, then leaned and helped him over the rail.

"I raised the storm jib and put out some mainsail," he said. With the helm more balanced and the wheel locked, Halcyon was again underway, bound for Bermuda. Hoping to wash away the trauma, Alonso said he took a hot shower while Steyn reported details of the rescue to the race committee. Steyn showered next and dressed in dry clothing. The men ate leftover paella before Steyn tucked into a warm berth. Alonso once again turned his attention to the race, thinking he might just beat some of the other boats to the finish despite his detour. On corrected time, Halcyon finished second in her class and fourth in the fleet.

"Dan ended up being the right guy in the right place, thankfully. I'm sure Jan Steyn would agree," said Guay, noting the tracker aboard Solid Air has since stopped transmitting a signal, indicating the boat may have sunk.

As the 16 skippers gathered for the traditional dinner, other sea stories emerged. Charles Schepens of Nahant, Massachusetts, skipper of the Tartan 30 Serif and a newcomer to the race, heard a popping sound as the mainsail slugs were ripped from the mast track above the double-reefed main. Schepens sailed with the storm trysail and genoa the last three days of the race. He had already put out an electrical fire caused by a short circuit in a system installed without fuses by the previous owner.

"The cabin filled with white smoke. Fire is the last thing you want out on the ocean," he said.

Without electrical power, Schepens could not charge batteries or use instruments during the race, nor could he start his engine after crossing the finish line in last place. Upon arrival, Serif was towed to the dock where festivities were already underway, celebrating the 19th biennial series that started in 1977. Schepens was presented with the event's seamanship award.

A few days later, 15 boats sailed the doublehanded leg back to Newport.

"It's amazing how hooked you get on this," Schepens said. "Four of the skippers were in their 70s. There was a lot of knowledge and experience in that group. I can't wait to do it again."