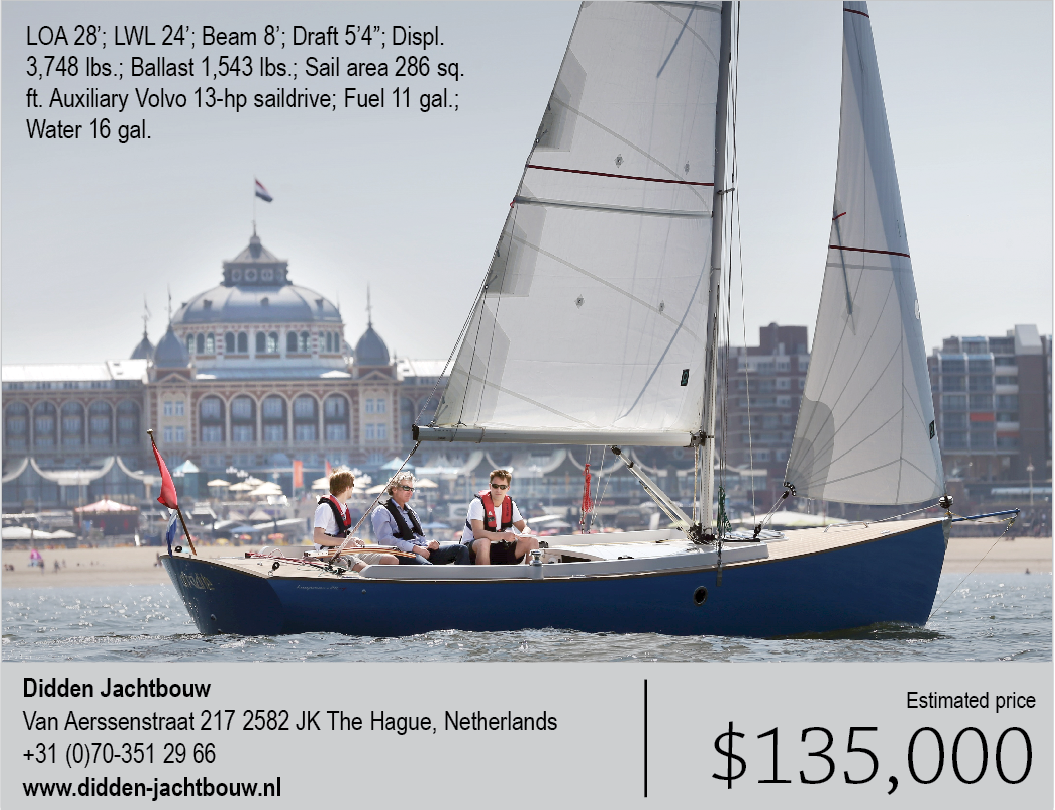 It’s said that the Dutch invented daysailing, and Didden Jachtbouw’s Koopmans 28 SQ daysailer shows that the Dutch still know how to enjoy a day on the water.

A good daysailer need only satisfy two requirements: The boat must have a large, comfortable, porchlike cockpit and enough stability to keep nonsailors from clutching at the coaming in a 10-knot breeze. This a 28-foot sloop has a 9-foot-long cockpit with high coamings for seatbacks and a capsize stability index of 2, meaning its stability is on par with offshore boats.

The SQ has a lot of features that turn it from a good daysailer into a great daysailer. It has a self-tacking jib and a full-batten, square-topped main with two reefs that comes with the lazy bag-type system. The 9/10th aluminum rig is stepped on a hinge for easy rigging after transporting the boat. Didden Jachtbouw also sells a trailer.

The SQ is no bathtub; it really belongs in a new category called the daysailer-racer. That’s because the SA/D is 28.67, giving it the power of cruiser-racers, and the L/B is 3.5 (the same as a Farr 400). If those numbers don’t provide enough speed, then the optional asymmetrical chute and code zero should tack on enough juice to jazz up anyone’s afternoon.

A lot of European boats, especially the faster ones, have little sheer and plumb stems and sterns. Designer Dick Koopmans gave the SQ a more traditional sheerline, and a curved, almost canoelike bow that could be called distinctly Dutch. There is four feet of total overhang.

The underbody is not traditional, with a spade rudder, saildrive and a bulb keel that is designed to shed seaweed. The saildrive is powered by a 13-horsepower diesel or an electric motor with batteries for two hours at cruising speed.

A Harken traveler spans the deck aft of the cockpit, and the sheeting system is also aft, like the setup on an Ensign. Under the seats are draining lockers. An optional freshwater cockpit shower is available.

There is a fine line between awesome accouterment and ostentatiousness on modern sailboats, and the SQ lands firmly in the awesome accouterment class belowdecks with its real refrigerator and built-in Nespresso maker. And why not? Daysailing is about a few hours of  pure enjoyment, so enjoy a coffee and skip lugging ice down to the dock.