In other words, it’s not easy to build the perfect sail training boat. But a partnership between world-class manufacturer Beneteau and the American Sailing Association is a good place to start. compromises. It needs to be big enough to be comfortable for an instructor and at least a few students, but not so big as to be intimidating. It needs to be stable but responsive. It needs to be simple enough to learn the basics on but have enough options to take sailors to the next level. The result of that partnership is the ASA First 22. We were able to test sail an early version of the boat in Annapolis last fall.

It was a warm and sunny morning in Annapolis Harbor and the wind was slow to show up. We checked out the boat at the dock while we waited for the zephyrs to fill in.

The first thing that you notice when you see the First 22, is the enormous cockpit. You could fit five adults for a lesson and it would be positively luxurious for any group smaller than that, as ours was. The cockpit is plenty comfortable, thanks to the boat’s 8-foot 2-inch beam and nicely angled coamings.

The boat has twin rudders and a swing keel that extends to 5 feet 11 inches.  The sail plan has a 172-squarefoot, square-top mainsail, fractional roller-furling genoa and optional spinnaker.

The sail controls are simple but varied enough to really teach students how to get into the finer points of sail trim. Of course the halyards are all led to the companionway, meaning that students who don’t yet have their sealegs won’t have to venture out of the cockpit for anything other than flaking the mainsail. 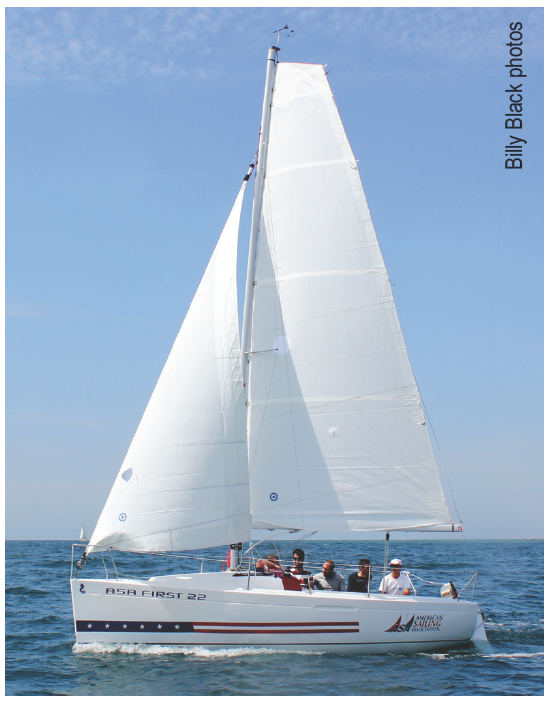 With the wind starting to fill in, we raised the mainsail, unfurled the jib and searched for breeze. Although the conditions were very light, the boat was moving and responsive, a good trait for a sailtraining boat when you can’t always choose the weather you might have for a sailing lesson. Tacking was easy and we never felt in danger of ended up in irons or having to throw our weight around despite the lack of wind.

Thankfully the wind picked up as we neared midday and the First 22 had a chance to show her stuff. Even though it was light, probably 5 knots, the 22 was sprightly and light on her feet. At one point, traffic in the harbor gave us an opportunity to pick through the anchorage and boat responded well to having to snake around mooring balls and transoms.

The First 22 is available to schools— special financing programs are available— as well as to the public, where it could serve as a fun and casual daysailer for less-experienced sailors. Schools will appreciate it’s ability to appeal to a wide range of students, from beginners to more advanced sailors.