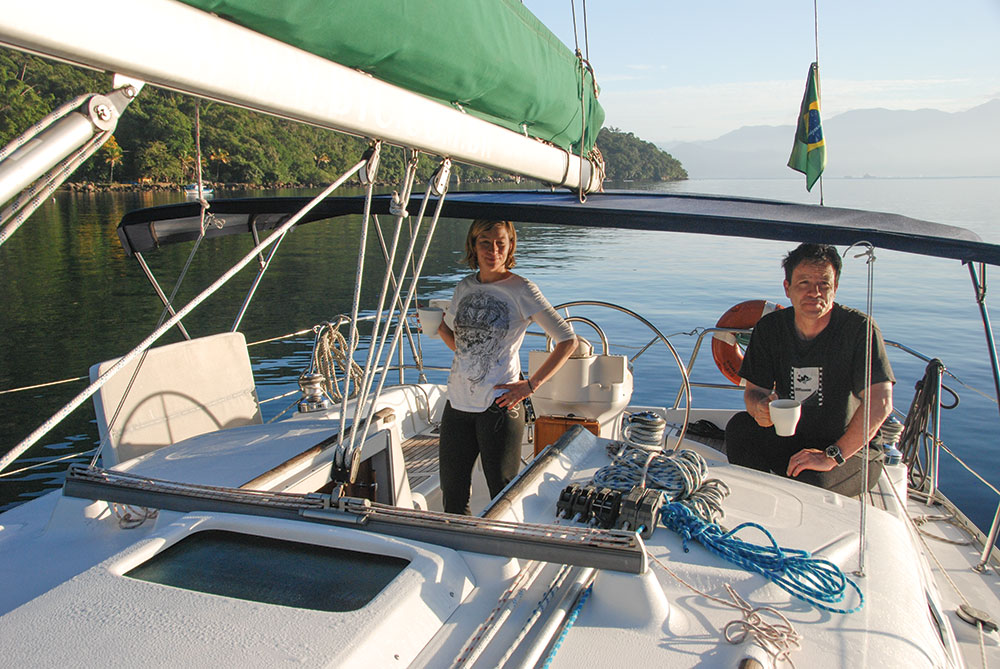 We began having doubts as we bounced along Brazil’s 100-mile-long Costa Verde coastline aboard a public bus. After sailing in various tropical spots around the world, we held out no expectations for our spontaneous trip in Brazil. And even though we had set the bar low, we were unprepared for how high the reward would be as we explored the beauty of this remote charter cruising destination.

For a south of the equator sailing journey, Ilha Grande, Brazil, is justly listed as one of Fifty Places to Sail Before You Die in Chris Santella’s book. The book was our first introduction to the area, because outside of Brazilian locals, most people have never heard of Ilha Grande 100 miles down the rugged coastline south of Rio de Janeiro. The area has a diverse history as a pirate’s lair, leper colony and penitentiary turned into a vacation hotspot.

The Angra dos Reis area sports an island for every day of the year, many privately owned, pristine remnants of Brazilian rainforest and 2,000 beaches. When I asked my Brazilian friends for their favorite vacation spot, Ilha Grande was unanimously named. Traveling in the area is only done by boat, and with two captains and one rookie in our crew, we were able to travel in style. A cruise along Brazil's Costa Verde includes stops at remote Ilha Grande.
Michelle Hurni
Before sailing in the Ilha Grande area, it is compulsory to learn one of two things: Portuguese or patience. Our choice was patience, as the popular sailing treasure is well known by the laidback locals, but not so popular with non-nationals, so little English is spoken. Just getting a charter booking was challenging, by emailing back and forth and calling Brasil Yacht Charter. Google translator was our best friend, and even then we didn’t get most of the information we needed before arriving. Most people we communicated with were using Google translator on their end.

Located more than two hours from Rio, we chose to take the adventurous and economical option down the coast via the public Costa Verde bus, although you can travel in luxury in a private car or taxi at a pricey $250 each way. Finding the marina where our chartered 36-foot Beneteau Oceanis was located was like a treasure hunt. Our directions by bus to Marina Verolme and the Brasil Yacht Charter base included “two hours into the ride, look for large yellow cranes” and “get off the bus when it starts up a big hill.”

Once at the marina, Brasil Yacht Charter was just like any other charter office, complete with air conditioning, chart table and espresso. One slight variation from previous bareboat experiences was the chart briefing, which didn’t include a chart of local information about submerged rocks to avoid, what the bottom was like for anchoring, whether mooring balls were around or other pertinent sailing conditions. The briefing took place on a tourist map, all about where to eat, swim and play. With that information at hand, we set off at a pleasant turtle’s pace across the shipping lanes from the mainland of Brazil to the untouched collection of remote islands. Ilha Grande was our target.

Although our trip was in the off season, the local Brazilian flavor and onshore scenery made up for the lack of breeze, which picks up during the high season from December to April. The bareboat charter rates were the cheapest we’ve ever found, and communication errors between the marina and
main office made us keep asking, “Are you sure we don’t owe
you more?” 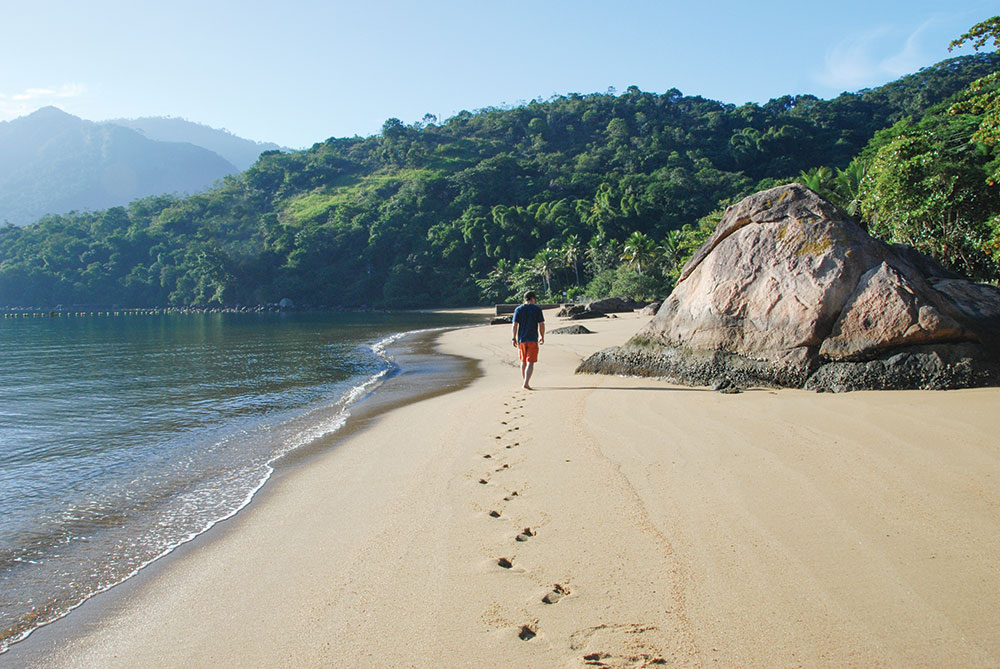 A cruise along Brazil's Costa Verde includes stops at remote Ilha Grande.
Michelle Hurni
Our first stop was Restaurant Lele, where we motored in at dusk, the only boat in the sheltered cove. The thick jungle canopy opened up to the beach with covered picnic tables and our first taste of the local drink, Caipirinha. The strong alcohol was cut with any type of tropical juice you can imagine, mango, coconut, pineapple and went perfectly with grilled fish.

The next morning we set off on foot through the jungle in search of the hard-to-find Sitio Forte. One sign was all we saw, but what kept us on the beach was the spontaneous laughter coming from the local school, where the children arrive each morning by boat or foot because there are no cars on the island. While we searched for the fort, three local boys abandoned their fishing and soccer to liberate a coconut with a huge pole from a tree for us. The oldest cut it open with a machete, handed it to us with a smile, then they left us with our sweet treat, their generosity shining on their faces.

Sailing in the Ilha Grande area is mostly cove hopping, so we picked up our anchor and sailed off to check off the next target on our list. The entire island of Ilha Grande is protected as part of Ilha Grande State Park, so the only way to get around is on the sandy walking paths. There are over 90 miles of hiking trails, most terminating at secluded beaches. With a sailboat, the remote beaches are a dingy ride or refreshing swim to the beach.

If you remember the 1980s movie “The Blue Lagoon,” staring Brooke Shields, you can picture the Blue and Green Lagoons. For one of the most popular coves on Ilha Grande, we again found ourselves alone to snorkel and turtle stalk. Blue Lagoon is considered one of the seven wonders of the “Big Island,” and it was worth a swim through the slender channel between Ilha Grande and Ilha Macacos connecting the two lagoons. A cruise along Brazil's Costa Verde includes stops at remote Ilha Grande.
Michelle Hurni
Just around the point from the Green Lagoon is Frequesia de Santana, which was once an important industrial center in the 17th century with coffee and sugar cane plantations. Today the beach is ruled by nature. The beach is guarded by the picturesque Frequesia de Santana, the Santana Church, which was built in the 18th century.

The next stop was civilization, the thriving tourist town of Abraao. Our charter staff on the mainland had recommended numerous restaurants to try out, so it became a frequent destination. We dropped anchor on the quiet eastern side of the cove, away from the tourist boats carrying bikini-clad visitors to the remote beaches. Restaurants ranged from gourmet, with tables set in the sand, to a casual pizza parlor a few blocks inland.
Artisan shops lined the beach. Local music was played in
the main square, drifting onto the beach and to our
anchored boat.

Our information on Palmas cove promised a floating bar, but in the off season, we had to settle for a local serving Caipirinhas and fish on Manges beach. The cove is surrounded by silky emerald jungle layered over rolling terrain, a visual delight as we sailed in. While Captain George stayed behind to keep an eye on our anchored boat, the girls trekked the sandy path 15 minutes to the wild and inviting Praia Lopes Mendes, voted the best beach of Ilha Grande. Tribes of monkeys swung in the trees overhead, then the jungle trail opened up to waves crashing on shore. No restaurants or hotels, just five miles of pristine beach only accessible by flip flops.

Upon arriving back from our quiet adventure to Lopes Mendes, we found George swinging from the halyard into the balmy bathtub clear water. Apparently, the locals on the beach just kept bringing refreshing Caipirinhas and George forgot to say no, thinking they were equivalent to lemonade. When he swamped the dingy while picking us up from the dock full of tourists, we knew it was time for a new captain.

Away from the fine, white sand beaches we found an old pirate village and modern day hurricane hole, Saco do Ceu. Perfect for pirates, it is completely hidden from a cruise around Ilha Grande but worth the motor into the inner sanctuary past expansive private retreats. In complete contrast to the rest of the island, the water was as calm as a lake and surrounded by mangrove trees. If you follow your travel bug to Ilha Grande, bring your translator, be prepared for the tranquil lifestyle, and bring cash, as there are no ATMs or banks in Angra dos Reis or on Ilha Grande. There are a few charter companies for either bareboat or crewed sailboats, including Brasil Yacht Charter BYC.com.br and Angra Sail Sail Angrasail.com.