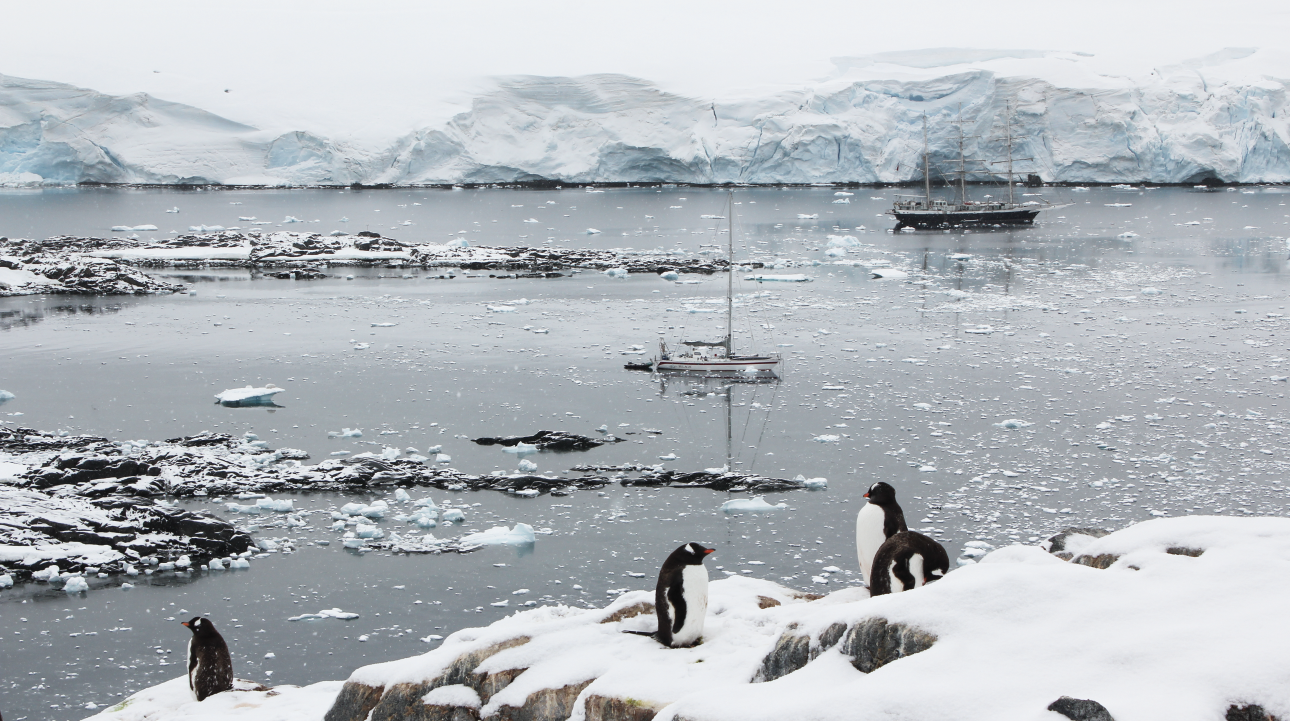 Never one to pass up an opportunity to climb out of my comfort zone (something to do with a 62-year-old body trapped in the mind of a 25-year-old), I found myself questioning my judgment during the memorable morning of March 5, when, just west of the South Shetland Islands in the Antarctic, I found myself in a Force 10 northerly, barometer at 971 millibars, getting it right on the nose on our homeward-bound passage to Ushuaia, Argentina.

Clawing off the Shetlands for sea room, the “squares were stowed,” and we only had “fore and afters” flying. First the clew strop on the mizzen staysail parted, followed shortly after by the head strop on the main staysail. A change from the roller-furling outer jib to the smaller hanked-on inner jib was a refreshing experience on the bowsprit in a driving snowstorm. With a single sail forward and both engines going, we were comfortably holding station, if not ultimately comfortable on board. 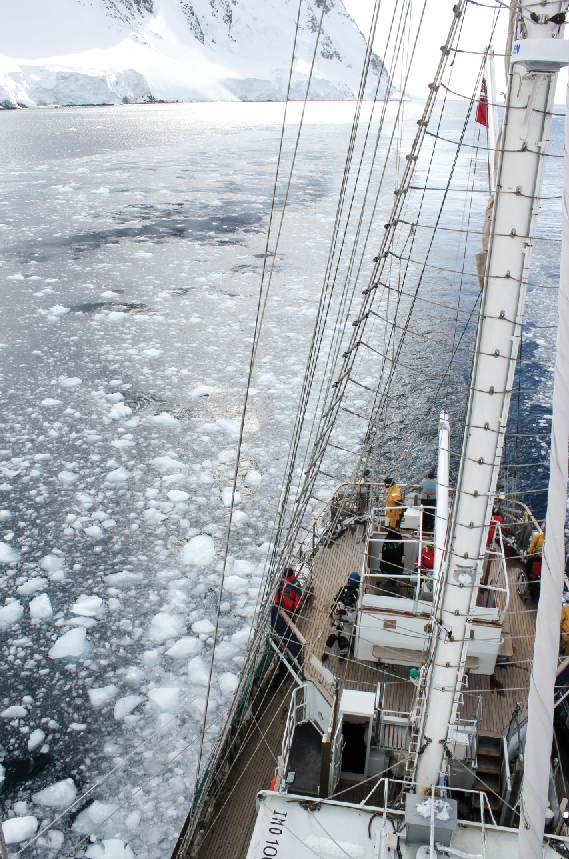 The tall ship Lord Nelson powers through the Antarctic brash ice.
Skip Novak
Sailing the Drake Passage in high winds is not new to me, but I have learned that a Force 10 storm is best avoided if at all possible. And I was not aboard my bluewater cruiser Pelagic that was designed for high-latitude sailing, but on the barque Lord Nelson, a square-rigger operated by the Jubilee Sailing Trust, which along with the second of the group’s two vessels, Tenacious, provides a sail-training experience for a mix of able-bodied and disabled crew.

Lord Nelson was on the last stages of a two-year, around-the-world tour that included stops in Brazil, South Africa, India, Singapore, Australia and Argentina, before continuing north on her voyage home to Southampton, England, in September 2014. From the Chatham Islands off the east coast of New Zealand she had sailed 34 days to the Beagle Channel without motoring, calms included, and doubled Cape Horn, sailing 50 degrees south to 50 degrees south by continuing up toward the Falklands and back down to qualify her crew for rings in their ears. She was the first British square-rigger to have made this passage since 1991; a very capable vessel sailed by a very capable crew indeed.

Lord Nelson arrived in Ushuaia on February 9 and I signed on board in a supernumerary role, meeting Capt. Chris Phillips and his permanent crew for the first time. When this 25-day adjunct cruise to the Antarctic Peninsula was announced, it was the quickest seller. I was added as pilot and expedition leader to cover all safety issues with respect to ice and anchorages, and to advise on the itinerary and environmental matters in addition to conducting the visits ashore.

One thing led to another, and after negotiating my involvement with Andy Spark, the operations manager of the Jubilee Sailing Trust, I found myself in the Drake Passage three days after signing on board, out on the end of the t’gallant yard arm while bowling along on top of a Southern Ocean swell under topsails alone in a 30-knot westerly, putting gaskets on the clewed-up sail. Being used to working aloft on a single mast, I found those first few minutes tense and unnerving until Stuart, a young marine biologist and one of the bo’sun’s mates, settled me down with a few tips on how to relax and stay tacked on. I immediately began to enjoy the ride immensely. He warned me, though, working aloft is addicting. The author stands ice watch in the crosstrees.

Climbing up the ratlines, you are on your own, and once at the top, you clip on to a safety wire that leads up and over the futtock shrouds to the crosstrees. From there you clip on to the safety wire along the yard and move out. Although safe in theory, falling off onto the safety wires at any point could be ugly, and certainly embarrassing. Letting go is not really an option with the deck 100 feet below you.

Lord Nelson carried 50 people for this voyage. The 35 voyage crewmembers, who ranged in age from 24 to 77, were paying trainees that included watch leaders who had a substantial number of voyages under their belts. The permanent crew of nine included the deck officers, two engineers, a medic, cook and a bo’sun’. Four volunteers were also signed on as bo’sun’s mates and a “cook’s ass” a term that evolved from the word assistant not fitting onto a crew manifest spreadsheet cell, rather than the crew’s personality. There were more crew than normal for this special voyage, but these were can-do men and women who knew the ship from many previous voyages and did the heavy work, made running repairs and the like, beyond the capabilities of the voyage crew and would be instrumental in providing muscle for the shore landings.

The voyage crew was split into four watches and stood four hours on and eight off. Responsibilities included steering (there is no autopilot), a lookout on either side and a scribe to record the log entries and meteorological readings. Bracing the yards and setting fore and after sails required two watches or all hands in heavy weather. Oncoming watches also had duties to help prepare the meals (washing, peeling, slicing potatoes for chips and top and tailing green beans for 50 is not to be underestimated) and then washing up. Every day except Sunday, “happy hour” was observed after breakfast, regardless of the weather or come what may. It was a full pull through from stem to stern, scrubbing and mopping of lower and upper decks, cleaning the heads and galley. The physically challenged sailors were not excluded from any of these tasks, the rule being that they were not to be helped unless they asked for help. If you are looking for rest and relaxation, disabled or not, signing up with this ship is not for you.