Home . Articles . News . Features . Journey to the bottom of the world

Journey to the bottom of the world

When your father is around-the-world racer and high-latitude cruiser Skip Novak, it's no surprise that a cruise to the Antarctica is a family vacation, and 11-year-old Lara Novak chronicles the Christmastime journey The author paddles back to the mothership Pelagic moored off Port Lockroy.
Skip Novak photo
My dad, Skip Novak, my brother Luca and I had just taken an almost two-day-long plane trip from Cape Town, South Africa, to Ushuaia, Argentina, the southernmost town in the world. There we met up with my dad’s boat Pelagic. Dave and Bertie, who both work on the boat from time to time, met us there. My mom, Elena Caputo, planned to meet with us later in the trip because she had to stay behind to work. She is a journalist and Nelson Mandela had died the night before we left. Dave would come with us as crew until she could join us.

We spent three days buying supplies in Ushuaia, during which time Amy, Daisy, Andrew and Emma arrived. Andrew is a BBC filmmaker, and Emma is his wife. Amy is 11 like me and Daisy is 14. Andrew and his family were going to Antarctica with us to film a documentary on penguins at a former research base turned museum called Port Lockroy, and a short film called “Children in Antarctica,” featuring Amy, Daisy, Luca and me.

On December 10, we set sail down the Beagle Channel to Chile. Amy and I spent a lot of time up in the bow. That night, when we arrived in Chile, there was a huge luxury yacht anchored in the bay. The owner of Billy Budd 2, Mariacristina, is a friend of my parents, and we were invited for supper. Once we had all managed to squeeze out of the hatch of Pelagic, we dinghied to “the boat with the door.” After supper, one of the crew showed us the television that came out of a desk with a click of a button. Skip Novak photo
In the morning we took a long walk around to find our Christmas tree. When we found one, we took turns chopping it down and then carried it back to the boat. It was a Canelo tree, which is the traditional Christmas tree in Tierra del Fuego. To preserve it until Christmas, we stored it in the bow of the boat, where it is very cold.

The next day we set sail down to the end of the Beagle Channel, and as an early dinner we had crab that Dave had caught. We soon learned that was a bad idea once we entered the Drake Passage and the waves got big—the crab started to come right back up again. All the children, including me, were seasick. Amy nicknamed her bucket Chucky Bucky, but Daisy, who was doing the best of all the kids, spent most of the time in the pilothouse. Eventually, I joined her, but Luca and Amy were still very sick.

I had decided to write a diary about my trip, a once-in-a-lifetime experience.  I also drew pictures, and I had drawn two in Ushuaia, but my first subantarctic drawing was of a cape pigeon. There were many flying around the boat, as well as different kinds of albatrosses. 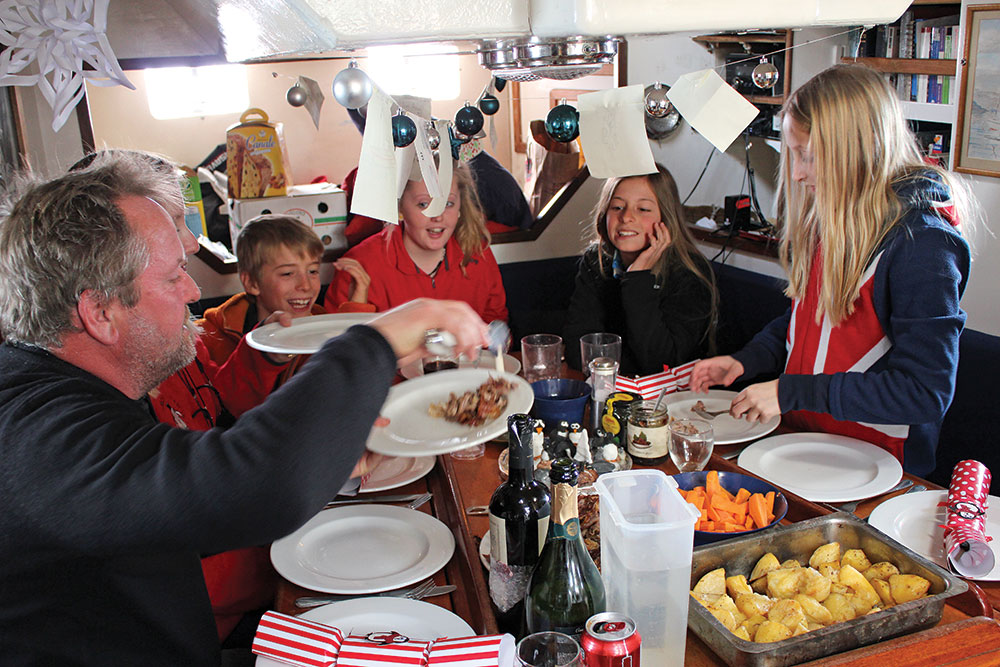 The crew, from left to right, film producer Andrew, the author’s brother Luca, Andrew’s daughters Daisy and Amy, and the author, enjoy Christmas dinner.
Skip Novak photo
Eventually, Luca and Amy joined us in the pilothouse. Amy started to feel better, and because she was dehydrated, she decided to risk some juice—a big mistake. Almost immediately, Chucky Bucky was called back into duty.

On the third day, land was finally in sight. Our first anchorage was in Whalers Bay, Deception Island. We took the dinghy ashore and sledded down a hill while Andrew filmed. Instead of sand on the beaches, there is ash, as Deception Island is a water-filled semi-active volcano, which means that it could still erupt. Amy and I decided to dip our feet in the water because there are hot patches of steam near the shore. The water smelled disgusting—like rotten eggs and garbage—because of the sulphur. Just before we took the dinghy back to the boat, we saw two chinstrap penguins—the first penguins of the trip.

In the morning, we started sailing south through lots of icebergs with really cool shapes, and my dad taught us the different names for the different sized ice pieces: small growlers, medium-sized bergy bits and full-fledged icebergs. We eventually spotted Cuverville Island, where, floating on an iceberg, we saw the first seal of the trip. It was an incredibly fat Weddell seal. We anchored the boat and took the dinghy ashore, where we were greeted by a colony of gentoo penguins. My dad, my brother and I watched the penguins walking up the trails they make in the snow, while Andrew filmed Amy and Daisy. Luca found the shell of a penguin egg that had been eaten by a skua.

The next day we set sail for Port Lockroy, but we were held back by brash ice. My dad let us have turns steering through it and we kept crashing into it. We had lots of free time on the boat, so Amy and Daisy taught us some card games to pass the time. We didn’t make it to our destination that day, so we had to turn back and stay at the Chilean base Gonzalos Videla.

In the morning, we tried again to reach Port Lockroy. Close to the station, a giant wall of ice blocked our path. We tried to push through, but got stuck after about five seconds—typical Skip Novak style. We played cards for hours and hours after that, but in the morning we had drifted forward and could take the dinghy ashore. Helen, one of the people who worked at Port Lockroy, gave us a tour of the base on the island which, as well as being a museum, has a British post office. Thousands of cruise ship tourists each year send postcards from Antarctica to their family and friends back home. There were four women looking after the base: Helen, Sarah, Kristy and Jane. Pelagic anchors near the Adelle penguin colony on Yalour Island.
Skip Novak photo
Port Lockroy was really cool. We were there for about two weeks, so we did a bunch of stuff, like collecting glacier ice with Sarah so the people at the base could have fresh water. We saw the first egg on the island hatch and the chick was so cute. Suddenly eggs were hatching everywhere! There were always partially eaten eggs around as well, but I never saw them being taken by the skuas. A skua is a predatory seabird, whose main food sources are penguin eggs and chicks.

Luca and I surveyed the penguins. Luca observed 17 penguin nests, but I followed only four because I wanted to examine them more closely. Each day we had to note the temperature, the wind, the barometer reading, the penguin’s behavior, how many eggs they each had and whether any eggs hatched. I named my penguins after my best friends, Saskia, Jaime and Emmaline, and the last one was named Rotch, which was a mix of my both my cats’ names,  Rose and Scotch. Lara sends postcards tothe family back home from the Penguin Post Office in Port Lockroy.
Skip Novak photo
I sent postcards to my friends and teachers from the Penguin Post Office at Port Lockroy. It took forever to write them all. We were invited over by the women on the base for supper, and they gave us icing to make tiny penguins and other animals. They have their own house near the base called the Nissan Hut. While in Port Lockroy, my dad and I went kayaking quite a bit, and we saw lots of penguins and icebergs. We landed on a frozen ice shelf and there were four crabeater seals lounging around.

On December 24, my mom arrived on the cruise ship Ushuaia, and Dave left. It was great that she managed to arrive before Christmas. On Christmas Day, after opening our presents, Amy and I went in the kayak by ourselves, with my dad and brother following us in the Zodiac. Amy and I put on drysuits and went swimming in the shallow water. It was an awesome Christmas.

A couple days later, we went to the top of Damoy Point with sleds full of camping equipment, including our tent. We set the tent up at the top of the glacier hill and Amy and I built snowmen. My family and I went camping that night, and the next day Andrew and his family left. The day we got back from our night camping, my godfather, Jerome Poncet met us on his boat Golden Fleece. He gave me a penguin carving made out of a fur seal tooth that he carved himself. He is really funny.

Amy, Daisy and I did the polar plunge, jumping into the water in just a swimsuit. I screamed the whole time because it was so cold. Luckily, my mom had warmed up water for showers. Luca takes his daily ride up the masthead.
Skip Novak photo
We eventually said goodbye to our new friends at the base and started sailing even farther south, to Yalour Island, which has a colony of Adélie penguins. Adélie penguins are really funny because they have a type of afro hairdo. My dad’s friend from Oxford University is doing a research project on penguins and he has a camera trap set up on the island. We got to change the battery and memory chip for him.

We then sailed back to Port Lockroy, and there were plenty of icebergs to take pictures of. While we were sailing, we went up the mast and I used the Go-Pro to take films. We saw a leopard seal and I got a picture of it yawning.

We reached Port Lockroy and received a shock: the weather going back to Ushuaia was terrible, and we had to get back for school. So when the next cruise ship arrived, we abandoned my dad and Andrew to take care of Pelagic and jumped ship. The cruise ship was really cool, but I missed Pelagic. We spent one night in Ushuaia, said goodbye to Emma, Amy and Daisy and then flew back home, ending our adventure.

See what Skip Novak has to say about his family vacation to the bottom of the earth here.