The recreated French frigate L'Hermione drew crowds on a U.S. tour with a bit of je ne sais quoi 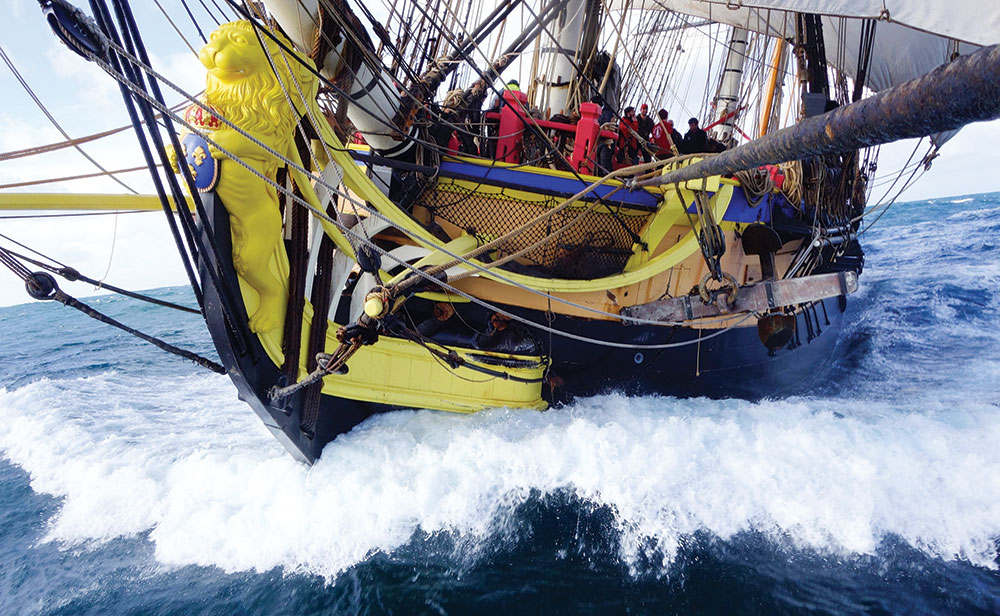 T. Craig Ligibel
When the Marquis de Lafayette arrived in America aboard the French frigate L’Hermione in 1780, he brought the good news that the French were sending troops and material to help the fledgling American Revolution. He was greeted with enthusiasm wherever he went. This summer, a recently launched exact replica of L’Hermione retraced a portion of that momentous voyage. Reaction from the more than 50,000 tall ship aficionados who crossed the ship’s gangplanks has ranged from awestruck to incredulous.

“Lafayette said the original L’Hermione ‘sailed like a bird,’” said Capt. Yann Cariou, L’Hermione’s 58-year-old skipper. “I have found that to be true as well. With the wind off her beam, she can sail at a speed of 65% to 75% of the speed of the wind. At 8 to 10 knots, it’s as if she is floating above the water.”

Cariou is no stranger to square riggers. He has piloted a host of them in his native France, most notably the 1896 three-masted barque Belem. He has been involved with the L’Hermione project for more than five years.

“This is a very special ship. When I first laid eyes on her, she was still under construction in the shipyard at Rochefort, France,” he said. “It took 17 years to build her utilizing the traditional methods of shipbuilding, and organizers of the project managed to source craftsmen from all over Europe to assist in the building.”

The original L’Hermione was built in less than seven months by a crew of shipwrights, craftsmen and convicts. It is estimated that more than 35,000 days were spent from start to finish. “It took longer to build the new L’Hermione, because the builders had to relearn all the skills from square one,” Cariou said. “Each element of the ship was a unique challenge.”

The construction of the 217-foot L’Hermione was aided by a set of drawings the British had made of one of her sisterships, which was captured in the West Indies in 1783.

“The British were so impressed with the Concorde class of French frigates that they wanted to make sure they could replicate her sailing abilities in ships of their own,” Cariou said. “In building the modern-day L’Hermione, no expense was spared and no detail was too insignificant.”

The price tag for the construction and initial voyage of L’Hermione is approximately $32 million. 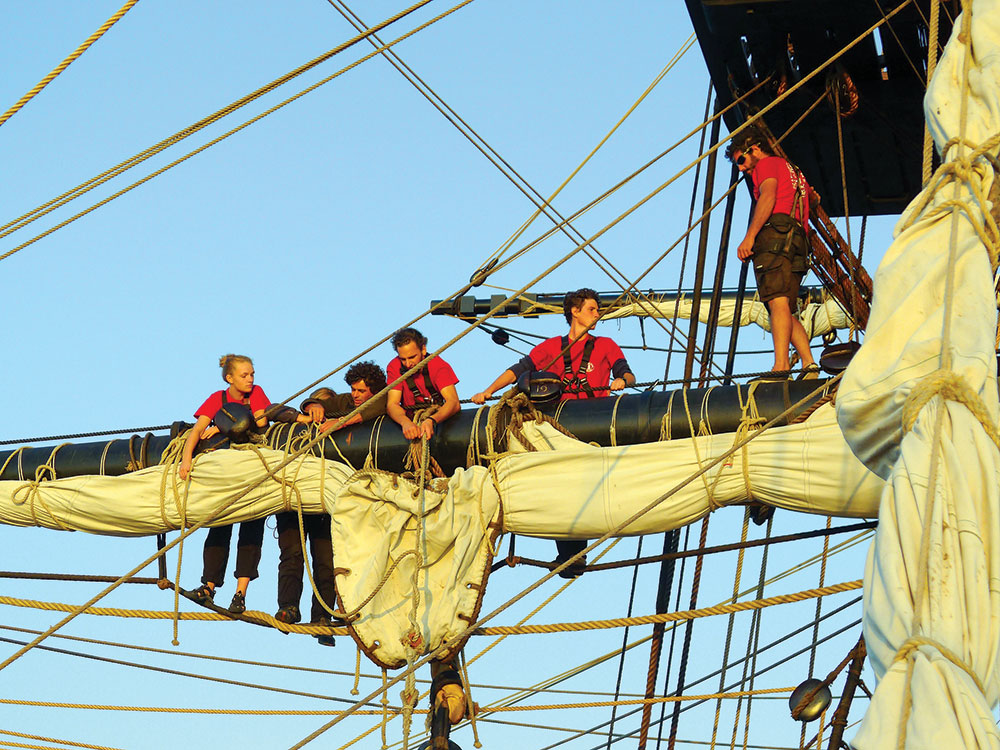 The crew climbs the rigging to set sail.
T. Craig Ligibel photo
More than 2,000 French oak trees were used for the more than 400,000 hand-crafted wooden ribs, spars and decking planks. Her gundeck cannons, capable of firing 12-pound cannon balls, were forged at the same foundry in Ruelle that produced the originals. L’Hermione’s masts are composite laminates of Oregon pine—the main mast is 155 feet tall and the 84-foot-tall lower main mast weighs more than 10 tons.

“For a ship that weighs more than 1,000 tons, she handles like a dream,” Cariou said. “She is both fast and responsive. We have not changed anything of significance from the 235-year-old designs. Why risk ruining perfection?” 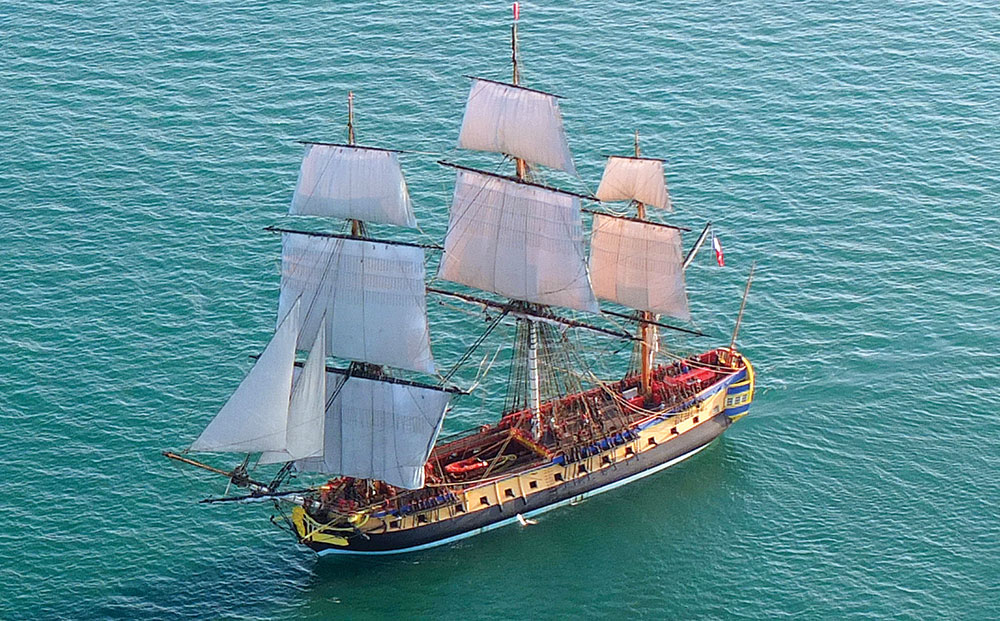 L'Hermione sets sail.
T. Craig Ligibel photo
L’Hermione’s oldest crewman, American 57-year-old Marc Jensen, felt that he had “become one with the ship” during his tenure aboard.

“I answered the call for volunteers and was one of 160 selected,” Jensen said. “I have been in love with the ship from the moment I saw her being built.

“On the 34-day passage from France to Norfolk when we were under sail, which was most of the time, I’d go out on the bowsprit, ahead of the spritsail, lean back into the headstay and feel the pulse of the ship as she moved through the water,” he said. “It’s a little like riding on the head of an elephant with a gently swaying motion.”

Jensen was one of 54 volunteer deckhands, who sailed with 19 professional sailors. The average age of the volunteer crew was 27 and one-third were female. Over the two months, they rotated on and off the ship. The original L’Hermione carried a complement of 120 officers and crew.

“No need for gunners and infantrymen on the modern-day version,” Jensen said. “But then that original ship didn’t have onboard photographers and PR men either.”

Jensen, who has been sailing all his life, was concerned about the physical demands of being a deckhand aboard a ship where brawn and agility aloft were essential components of daily on-board duties.

“I didn’t know if my body was up to the task, but I’d scramble up the rigging just like everybody else.”

One night, Jensen’s quartermaster called for volunteers to go to the top of the mainmast to stow the top-gallant.

“There was a 10-foot sea running abeam that was causing the ship to roll. It was like climbing a 135-foot metronome. And, an interesting thing happens when you climb beyond the level of the mainsail. How you climb and the work you do once you get to the top takes on the rhythm of the ship’s rolling. Once you find it, your work becomes smoother and you find yourself relaxing,” Jensen said. “And the view from there, even in the dark, is spectacular.”

Delahay Amandine, 27, worked with Jensen on the starboard watch.

“This voyage has been amazing. We all worked together to get the job done, and it takes at least two people to steer the boat, sometimes four when the weather is bad,” Amandine said. “Many of the crew had never sailed before, but that didn’t matter because nobody had sailed a ship like this in over 200 years.”

The most memorable part of the trip for Delahay was diving off the deck in the middle of the Atlantic Ocean.

Delahay, like most of the crewmen, does not wear gloves.

“The manila ropes are quite supple, and the tar coating on the hemp ropes is quite sticky,” she said. “Gloves would soon be very difficult to keep clean and sticky gloves could present a safety
concern aloft.”

The smell of the ship is the earthy scent of tar mixed with the sharp odor of salt air, harkening back to bygone days as the standing rigging is soaked in tar and the decks are maintained with a pitch and oil mixture. Conditions belowdecks are a vast improvement over those the original crewmen endured, however.

“Stepping onto L’Hermione and taking a deep breath is like being at the beach on a hot day, walking from your car to the ocean over a parking lot that has just been blacktop sealed,” Jensen said. “But down below the ability to take showers and sleep in hammocks or bunks was a pleasure.”

Unlike the original voyage, there was plenty of fresh water to drink and to use for personal hygiene, thanks to the almost 4,000 gallons of water the ship carries that was augmented en route by the use of two desalinization units and a UV purifying system.

With six large nets overflowing with grapefruits and oranges, there was no worry of scurvy on this cruise, but there wasn’t any grog for the crew. The ship carried two barrels of cognac courtesy of sponsor Moet Hennessy, but the spirits were to be auctioned off with the proceeds being put back against the cost of the voyage. While the ship’s builders and riggers used 18th century methods for her construction, there has been some accommodation for operating a vessel in the 21st Century. A full complement of navigational gear is used on deck, while belowdecks, a paper chart of the ship’s progress is also maintained.

L’Hermione’s second in command is 29-year-old Charlene Gicquel, who said that her job at times is more like a den mother than that of a sailor.

“We have so many young people aboard, and the work is challenging if not dangerous at times. Balancing all of this takes time and tact.”

The diminutive Gicquel, well-turned out in red and white striped shirt and blue skirt, is the epitome of on-board professionalism. Commenting on the scant distance between the bottom of the ship’s 16-foot keel and the muck of the Annapolis Harbor channel, she wryly exclaimed, “Why, we had 24 inches to spare,” she said. “C’est tres bon.”

The ship spent the summer sailing from Yorktown, Virginia, along the Atlantic Coast to Nova Scotia, with stops along the way.