Fourteen years ago, at age 52, the sailor from Marblehead, Massachusetts, bought a 1974 Catalina 22 Mk I for $2,500 because it seemed like an inexpensive way to go daysailing.

“The boat was sitting on a rusted trailer and had a junk outboard hanging off the back,” said Ford, who has owned a slew of boats over the past four decades. “At that point in my life, I had taken a 15-year break from boats, but when I heard about this one, I said to myself, ‘I have to have it because it’s exactly what I had in mind, a sailboat with a small cabin to get out of the weather, take some short cruises, and not have much maintenance.’”

A meticulous record keeper, Ford’s log of the restoration consumes reams of digital pages. Every stainless steel nut and bolt is accounted for, as are the bigger-ticket items like roller furling, a new outboard engine, standing rigging, electronics, a longer boom, self-tailing winches. The list goes on.

The bottom line is, as one observer once put it, sobering. The tally comes to just over $40,000.

How did such a small boat absorb that many Benjamins? According to Ford, it’s akin to bank fees,  a nickel here, a nickel there and pretty soon a good chunk of change is no longer in your account.

“The first thing I did was install a bilge pump. Who ever heard of a boat without a bilge pump? But that also meant putting in a battery to run it,” he said. “Oh, and don’t let me forget the through-hull fitting and hose so that the water can go back to the ocean.” Chip Ahoy looking beautiful on her mooring.
Ford changed the boat’s name from Take Five to Chip Ahoy after his companion, Barbara, thought she saw it painted on the transom in a dream. Since Ford is an artist and sign painter, it was a simple task of putting brush to fiberglass.

“The font is the same as the cookie,” he said proudly.

Ford sailed the boat in Salem Sound and shortly thereafter to Scituate, a seaside town south of Boston. “After Salem, I asked myself if I could make it farther, and I did. Then I sailed to Portland, Maine, and to Jonesport. I wanted to keep going, which is when I knew I was keeping the boat.”

The name change was easy. What followed was a shocker. The motor mount bolts were corroded. The engine ventilation cowls were tarnished and rusted. The engine was old and tired so Ford replaced it with a used, two-stroke, 9.9-horsepower Tohatsu and, more recently, a four-stroke, 8-horsepower Honda. He also replaced the transom motor mount and added a stainless lift-assist device to take the strain off his back when pulling the engine out of the water.

The pop-top feature that makes the coachroof lift up and increase headroom by nearly a foot was sticky, its gasket brittle, crumbling from age and perhaps lack of use. “It took me a while to find a new gasket. I scraped off the old adhesive and put the new gasket in place. If I hadn’t done that, it would still be leaking,” he said.

Since the pop-top was heavy, Ford purchased an electrical lift-assist mechanism that makes the task of raising the coachroof easier.

As the second and third years of ownership ticked by, Ford tackled rewiring the mast, rebuilding the rudder, replacing the standing rigging and adding an adjustable backstay. In the process he discovered the boom mysteriously was three inches shorter than it should have been.

“I found a right-sized used boom for sale for a couple hundred bucks from a guy in Boston,” Ford recalled. Anchoring in protected harbors gave Ford a lesson in Catalina 22 ventilation. “The portals don’t open and the breeze can’t come inside because there’s no hatch on the foredeck, so I decided to put one in,” he said. “That was the scariest thing I ever did, cutting a hole in my boat. You do it and it’s forever. Took me two hours to cut that hole. I must have measured it 16 times before I got out the saw. I kept hearing that old adage, ‘Measure twice, cut once.’”

Looking at a photograph of the work in progress, Ford still gets chilled. “But once it was done, I could open the hatch and get fresh air,” he said. “Rewiring the mast was another story.”

Ford threaded the wires backward on his first attempt, causing the electrical leads to the steaming light located approximately halfway up the mast to be misaligned by more than a foot. “It had taken me all day and then I had to do it all over again,” he said.

Repairing the swing keel proved an even more perplexing job, but there were professionals available in nearby Marblehead to handle the most difficult aspects. “I removed the cable, the keel bracket and the pin,” he said. “I had a company grind down the keel. It had to be shipped out for sandblasting before it was epoxied, faired down and painted. During that time, I rebuilt the keel winch.”

The rudder project translated to purchasing a solid plastic version that would retract so that it was entirely out of the water at the pull of a cord. “The original rudder kicked up but didn’t come all the way out,” he said, noting the rudder is bolted to the transom. “The standard rudder was wood core with a fiberglass coating and I’ve known a few people who have had the rudder snap right off. This new one will kick up if you hit something. Otherwise, it comes straight up.”

Ford taught himself boat maintenance and repair, mostly through trial and error after dropping out of the Massachusetts College of Art in his senior year to sign on with a Caribbean-bound boat crew. He earned a few bucks painting names on boats during the trip.

“I learned a lot during that trip and the ones that followed,” he said. “So I knew right away that I wanted a boat with roller furling. I was tired of hanking on the jib and wrestling with it when we came back to the mooring.”

Ford purchased a Furlex roller furling system and had a sailmaker recut his jib to fit it. “That made all the difference in the world,” he said.

More upgrades followed. The original winches were replaced with Lewmar self-tailing models purchased from a friend. Ford plumbed two additional scuppers in the cockpit sole, a preemptive move he believes saved him from demise when the boat experienced a knockdown.

“The water in the cockpit was up to my knees. If I hadn’t put in those drains, I don’t know what would have happened. Nothing good,” he said. Chip Ford meticulously paints the new name of his well-loved Catalina 22.
To make singlehanding easier, he fastened new deck hardware—cheek blocks and Spinlock rope clutches—and brought the control lines back to the cockpit. He purchased an anchor roller for the bow and installed a deck pipe for the chain and rode. He bought a Delta plow anchor as the primary and a Danforth as a backup. He also ordered a stainless-steel stern pulpit and a transom-mounted swim ladder.

“I thought the ladder was a good idea. If I went over the side, I needed some way to get back in the boat because I’m usually singlehanding, especially with the tiller pilot on. The boat keeps going, which is kind of a scary thought, whereas if you’re hand steering with a tiller, you let it go and the boat rounds up into the wind.”

Below deck, the galley sported a pressurized alcohol stove, but it wasn’t to Ford’s liking and was later replaced by a non-pressured alcohol stove. The glass portals were replaced and tinted. The teak and holly were refinished. A VHF radio was installed and linked to a new GPS-equipped chartplotter.

With all the new electronics, Ford added a second battery and four-way battery switch, and a solar panel to keep them topped off. The aging compass was also replaced.

During winters, Ford routinely laid a sheet of plywood across his home washer and dryer as a makeshift worktable. It was there he restored teak handrails, mechanical fittings and whatever else required attention.

These days, Ford sails Chip Ahoy from his mooring in Marblehead, venturing to Cape Cod and the Islands for two weeks each summer and taking plenty of daysails. “I love being out there,” he said.

So, through all of this, is there a lesson to be learned, considering his overall investment of $40,000 (15 times the purchase price) dwarfs the amount he might hope to receive if Chip Ahoy were put up for sale? The situation begs a conversation about boats being fiberglass holes in the water into which one tosses money.

“Forget the cost,” said Ford, adding, “I enjoy working on it as much as I enjoy sailing it. I love every minute, even during winter when the snow outside is piled high, I’m in here fixing things so that when sailing seasons comes, I’m ready to go.” 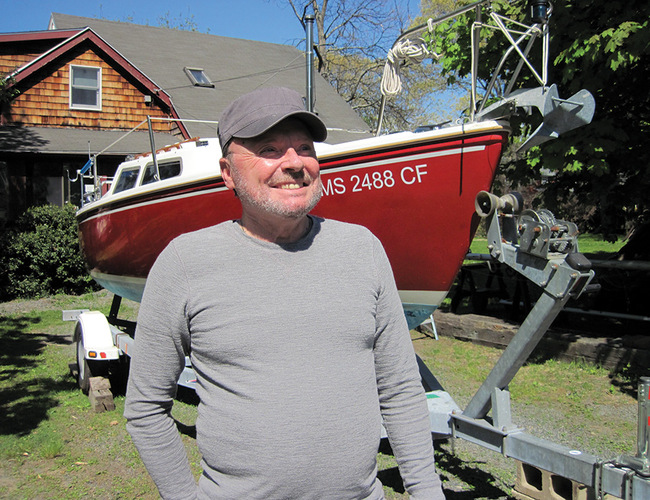 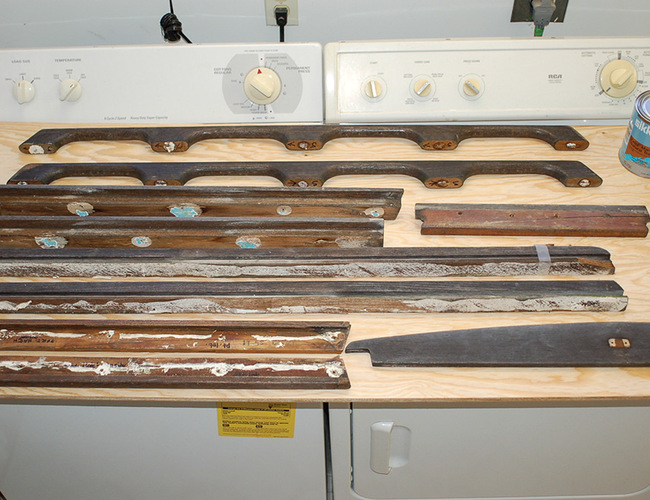 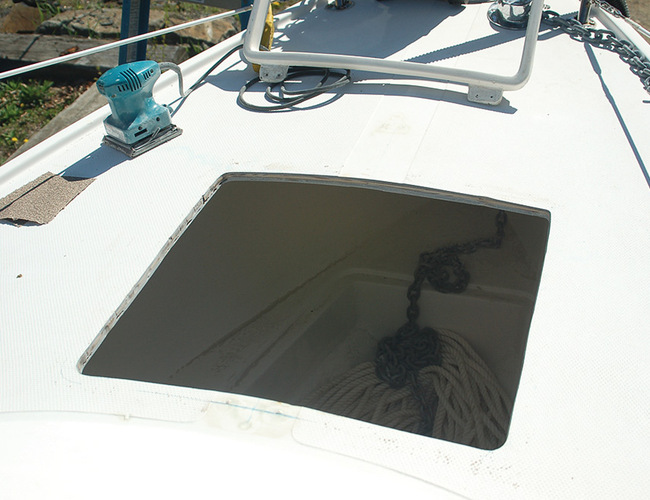