There was a time in the America’s Cup when keels were skirted, boats were outed as “dogs” after their first appearance on the racecourse and skippers called fouls on each other during races. In case you’ve buried your head in a Rosenfeld photography book for the last 10 years, those days are long gone. The America’s Cup will never look like that again. Land Rover BAR and Oracle Team USA face off in a training race in March. It was the first opportunity for competitors to test their speed against each other in their race boats.
Austin Wong/ACEA photo

When the America’s Cup was first sailed in foiling catamarans in 2013, naysayers who predicted it would be the end of the venerable event were proven wrong as crowds of nonsailors filled the race village waiting for a post-race fly-by from the space-age boat and audiences were stunned by what some called the “biggest comeback in the history of sport” when Oracle Team USA came from seven points down to run the table and win. The San Francisco event proved that a new style of racing—one far more about flat-out speed than tactics—could capture the sailing public’s attention. But will it be enough to do it again?

There are challenges that are different from the event four years ago. When racing begins May 26, the America’s Cup and its challenger series will be held in the waters off Bermuda, not the center of one of the biggest cities in the U.S., so crowds are bound to be smaller. The boats—50-foot-long foiling catamarans capable of staying on foils for nearly an entire race and achieving speeds of 45 knots—are similar thanks to the design rule, with some subtle differences in hull shape and appendage design and no longer a foreign concept.

Yet for as much as has changed about the America’s Cup since the American Oracle team first won in 2010, plenty remains the same. The Cup has always been equally as much about the controversy as the sailing and even before the teams all gathered in Bermuda, drama was unfolding.

Emirates Team New Zealand, which faced the wrath of returning to a nation of proud Kiwi sailing fans whose government partially funded the 2013 campaign that saw the team lose after an 8-1 lead, is clearly the fly in the ointment of America’s Cup harmony. While the other five teams were training—individually and against each other—in Bermuda, the Kiwi team hung back in their home Hauraki Gulf waters to train at home, always in the company of bold watchers from other teams. 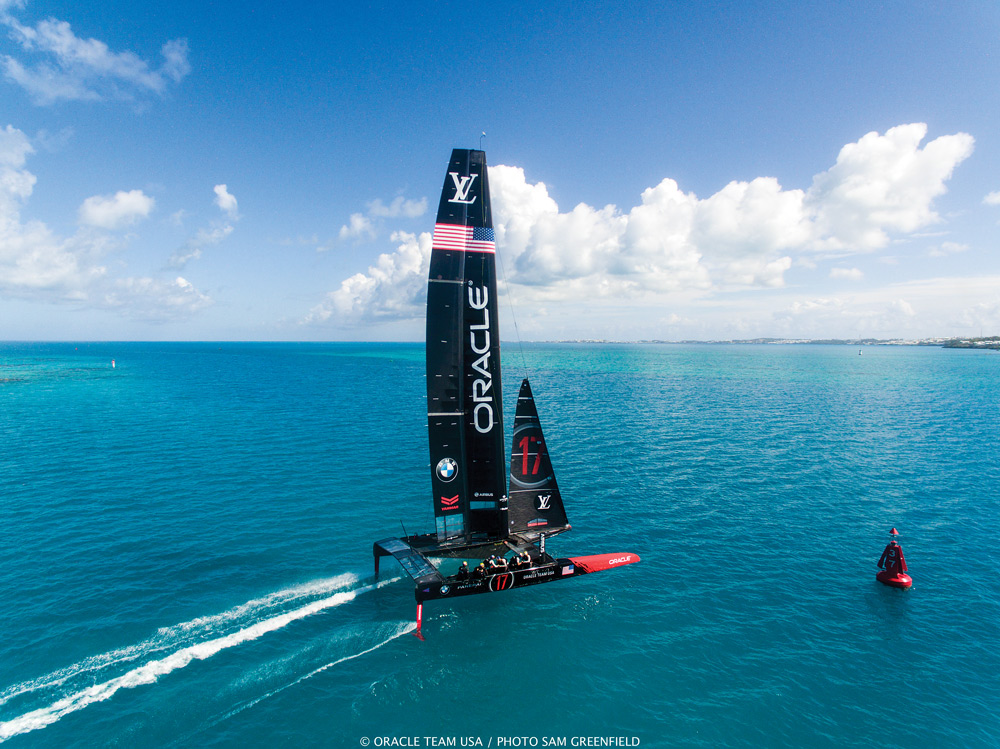 Rule changes in the event protocol require the approval of the defender and a majority of the challengers and Team New Zealand has been the lone dissenter in several recent proposals, including testing periods that allow competitors to race against each other before the event and another involving changes to daggerboards. The dissent is clearly not pleasing to the America’s Cup authority. An official press release in late March called out the New Zealand team, insinuating that it may be trying to swap out daggerboards for a new design, against the rules.

The Kiwis held no illusions that a welcoming party would be waiting for them upon their arrival in Bermuda.

“The danger of being a lone wolf, of course, is that there’s a lot of people, not just Oracle, that don’t want us to win this time,” Chief Executive Grant Dalton told The New York Times. “One would hope we don’t get sent to the bottom of the ocean by a boat— ‘Oh, that was a mistake; sorry about that’—one day with no form of redress in the rule. And that’s a very big concern for us. There are five teams that want us dead now, not one, only because we’ve ruined their little parade.”

Team New Zealand, which dumped longtime skipper Dean Barker after the 2013 Cup and now has 26-year-old Olympic gold medallist Peter Burling at the helm, is the only team employing a cycling system for the grinders that power the never-ending hydraulic needs of the boat. All other teams will use more traditional arm grinding.

Ben Ainslie’s British challenge Land Rover BAR heads into the first stage of the Bermuda event—the Louis Vuitton America’s Cup Qualifiers—with two points already in the bank because the team topped the leaderboard for the America’s Cup World Series regattas held in 2015 and 2016. Ainslie sailed with Oracle Team USA in the 2013 event and launched his own challenge shortly after that Cup ended.

Sweden’s Artemis Racing returns to the Cup again lead by Nathan Outteridge and Iain Percy. Although largely discounted in the last Cup, the team showed moments of brilliance and the consistency in its program appeared to pay off with a good showing during the first training period in which teams could sail against each other.

New challengers Groupama Team France, which has a smaller budget but is stacked with expert multihull sailors, and SoftBank Team Japan, which picked up Barker as skipper and CEO after his Team New Zealand ouster, face the growing pains common to first-time challengers. 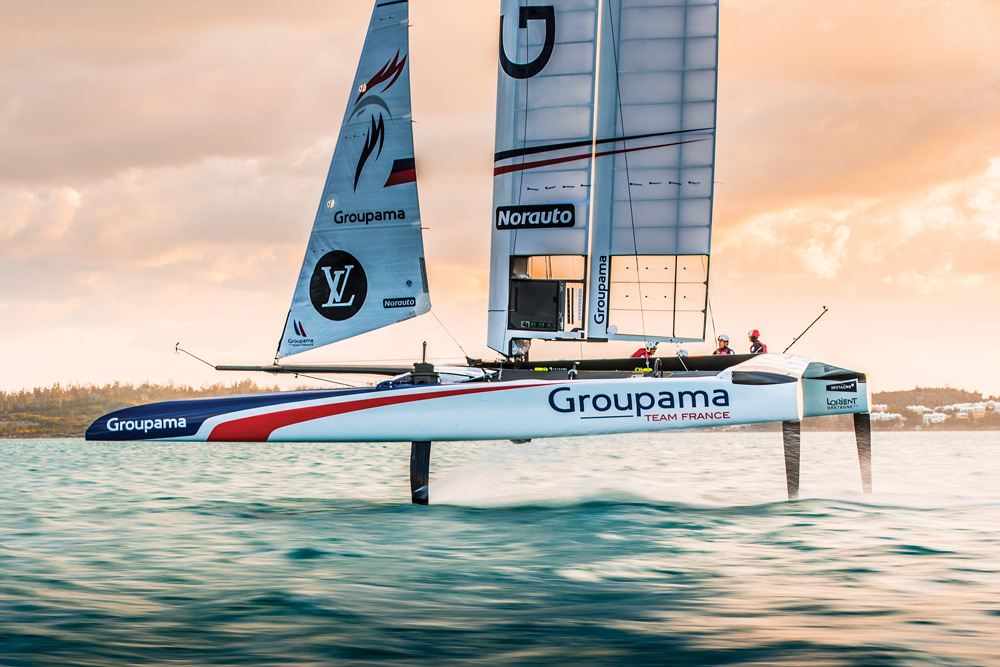 All of the challengers will have their work cut out to best Oracle Team USA, which has the benefits of a consistent team led by Spithill, who has sailed every Cup or challenger series since 1999, as well as some of the best designers and technical team in the sailing world. The team showed its prowess at refining their design and sailing team mix on the fly at the last Cup. Oracle will compete in the qualifier round, giving them time to scope out the competition prior to the main event.

Racing begins May 26 in two round robins in the qualifiers. Four matches are planned for each day, with races taking about 20 minutes, certainly a difference from the sometimes hours-long races of the IACC age. After the qualifiers, the top four challengers advance to the challenger playoffs, with the teams ranked by their finish in the qualifiers and matched in two semifinals beginning June 4. The winner of each semifinal then moves onto the challenger finals June 10 to determine who will sail against Oracle Team USA in the America’s Cup. The actual match will start June 17 and 18 then pause until June 24 when teams will sail up to 13 races until there is a winner in the first-to-seven series. Other events, including a super yacht regatta and the Red Bull Youth America’s Cup will be held in between races.

As the last America’s Cup proved, no one can predict which team will pop champagne and hoist the Auld Mug in late June (although a European betting site was giving the best odds to Oracle followed by Land Rover BAR at press time). Perhaps the bigger question is whether an America’s Cup held on an island in the Atlantic Ocean and sailed in boats that go so fast that match racing is a loose concept can continue to capture the attention and imagination of sailors around the world.

How to watch the Cup in the U.S.

• NBC Sports will broadcast live coverage of the America’s Cup qualifiers May 26 to June 3.

• Live coverage of the Challenger Playoffs will be offered on the America’s Cup Facebook page and the official app.

• NBC Sports will show live coverage of the Challenger Playoffs final June 10 and 11.