Sailing safe on a multihull

The monohull rules don’t necessarily apply to multihulls, so understand the difference before you set sail

There was a time when multihulls were enough of an oddity that they’d routinely turn some heads as they entered the harbor. Sailors have now embraced the many benefits of multihulls, and more and more, they are not just the design of choice for chartering, but also for liveaboard cruising. But the differences between monohulls and multihulls go beyond just the number of hulls, and even experienced monohull sailors are well served by learning how to adapt their sailing skills before they take off on a catamaran cruise.

Knowing how to safely sail a multihull begins with understanding the design differences from a monohull and how they affect how they are sailed.

Catamarans and multihulls have more speed potential than monohulls for several reasons:

1. Each hull of a catamaran is (typically) thinner in cross section than those of monohulls for less resistance.

2. Catamarans have a wider beam, which makes them more stable and therefore able to carry more sail area per foot of length than an equivalent monohull.

4. The absence of ballast reduces their weight and the amount of drag through the water considerably, without reducing the amount of sail that they can carry. 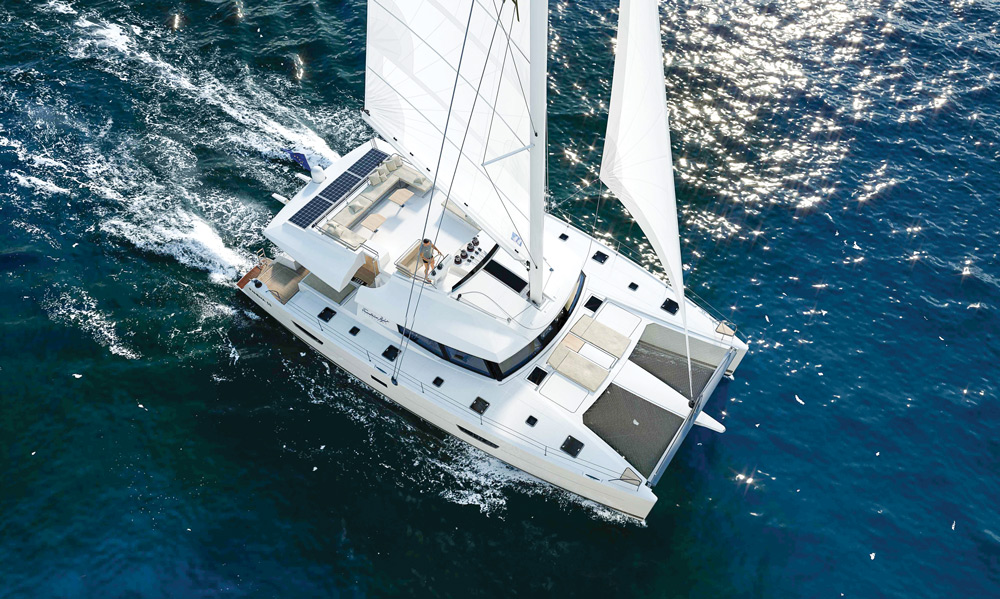 Modern production catamarans will carry you to windward as much as 25% faster than a similar length cruising monohull. For example, a 38-foot monohull might sail at a steady 6 knots, where a 38-foot cruising catamaran will sail 7 to 9 knots.  When you consider that the same catamaran will probably make 12 to 15 knots off the wind, they might be 75% faster than the monohull.

Keep in mind that there is a balance in sailing. More speed may mean less comfort and more comfort may mean less speed. Boats built for speed are focused on being “light” in weight and therefore usually forego the amenities below and in the cockpit that make a boat feel more like a home.

Unlike monohulls, catamarans do not heel in gusts to dissipate energy. Instead, they turn this energy into acceleration. Because sails and rigging have to take the increased load until the boat accelerates, catamaran sails are built of heavier sailcloth than monohull sails of the same size, and the corners have additional reinforcement. The standing rigging is also oversized compared to spars and rigging on the same size on a monohull.

Rapid acceleration causes rapid changes in the apparent wind, and cruising catamaran sails are generally trimmed with lots of twist to accommodate these changes.  Most cruising catamarans don’t have a working boom vang.  This allows the sailplan to automatically depower in the gusts by twisting off, keeping the boat flat.

Catamarans handle differently from monohulls when doing various maneuvers. Instead of one hull to move around, you now have two hulls and much greater beam to manipulate under power and sail. In addition, there are typically two engines instead of one (a blessing in most cases).

The mainsheet on a cruising catamaran is double-ended and leads to the starboard and port side of the boat. Always make sure you have enough line available to be able to ease the windward sheet if necessary. If you need to make adjustments while sailing, you and another crewmember can let out line on the leeward side and pull in on the windward side simultaneously.

If you tack too sharply in heavy seas, you can stall the boat; so make a wide, slow turn, allowing the outer hull to sluice in a nice semi-circle. You can use the engines to assist this maneuver by putting the outside hull engine in forward. If on starboard tack going to port, use the port engine. If on port tack going to starboard, use the
starboard engine.

Catamarans have the advantage of having two rudders, something most monohulls lack, but the rudders lack the draft of a traditional monohull rudder, and they often end up in disturbed water flow from the hull. This means they’ll be less effective than the barn-door type rudder a monohull sailor might be used to. Don’t expect to be able to muscle the boat around at the helm when the wind pipes up.

You’ve probably heard the adage that you should reef before you need to, and that’s even more true when sailing a catamaran. Monohull sailors may be attuned to reefing when the heel angle increases, but the same approach doesn’t work on a catamaran, which doesn’t respond to being overpowered in the same way as a monohull. Reefing to control downwind speed is important, especially in following seas. If the boat begins to leap off the wave crests or the bridgedeck begins to slam at the bottom of the wave, it’s time to slow down. Overall speed is still high, but you’ve eliminated the bursts of acceleration that punish the boat.

As a general rule, if you are sailing downwind and the wind picks up, reduce the mainsail area and if sailing upwind, reduce jib area.

The Moorings charter company posts a guide on board all of its cruising catamarans, showing how much sail should be carried in different wind ranges:

Step 4: At 30 knots, roll the jib another three turns.

Step 5: At 35 knots and above, douse the mainsail and sail with small jib alone.

Reefing is easier to do when sailing upwind or reaching, versus downwind when the mainsail may already be eased out enough to be laying against the spreaders. Heading up to reduce the friction can help, as well as slowing down the boat during the procedure. It may still be necessary to winch the luff down (obviously while easing the halyard) to complete the reef.

Given the need to reef earlier on a multihull, it makes sense to walk through the reefing procedure before leaving the dock.

Few things strike fear into the heart of a monohull sailor than docking a catamaran, especially if it’s a big cruising cat with a lot of windage to push it in what may be the wrong direction.

Since catamarans are shaped like a box with two long hulls essentially parallel to each other, the side of the hull along the dock rests on multiple pilings. A monohull, which is elliptically shaped, generally rests with the widest part of its beam against a single piling. To protect the hull, you usually hang vertical fenders on either side of one piling traversed by a fender board; then use spring lines to keep the boat parallel to the dock, resting on that one piling. Since a multihull rests on multiple pilings, it is best to tie the fenders parallel along the hull, rather than vertically. Like a monohull, spring lines keep the boat from moving forward or aft, so the fenders stay against the pilings.

As with a monohull, plan your departure based on the wind and current direction. If the wind is anywhere forward of abeam to your bow, power out forward. If the wind is anywhere abaft abeam to your stern, power out backward. The difference between leaving a dock on a multihull versus a monohull is the need to hold bow or stern fenders against a piling or the dock as you leave.

With the curved hull of a monohull, you can often just power forward, watching your stern carefully to avoid it hitting the dock. But the multihull’s stern is against the dock to begin with and will continue scraping the dock as you go forward. To avoid this, pivot against a fender and spring line to get the bow out (or the stern out, if backing out). If the boat is at the end of a pier, you can rig a spring line from the bow, then go forward against that line to spring the stern out.

Portions of this story have been written by Steve and Doris Colgate, owners of Offshore Sailing School, along with certified instructors, and have been excerpted from the school’s Catamaran Endorsement Supplement.