Fresh out of college, a young couple found the boat they didn’t know they were looking for and set about on a major refit

One of the most important things on a sailboat is ensuring that the mast is fastened and secured to the deck properly.  When we bought Avocet, Chris’s brother Jon made it his mission to remove the chainplates for a 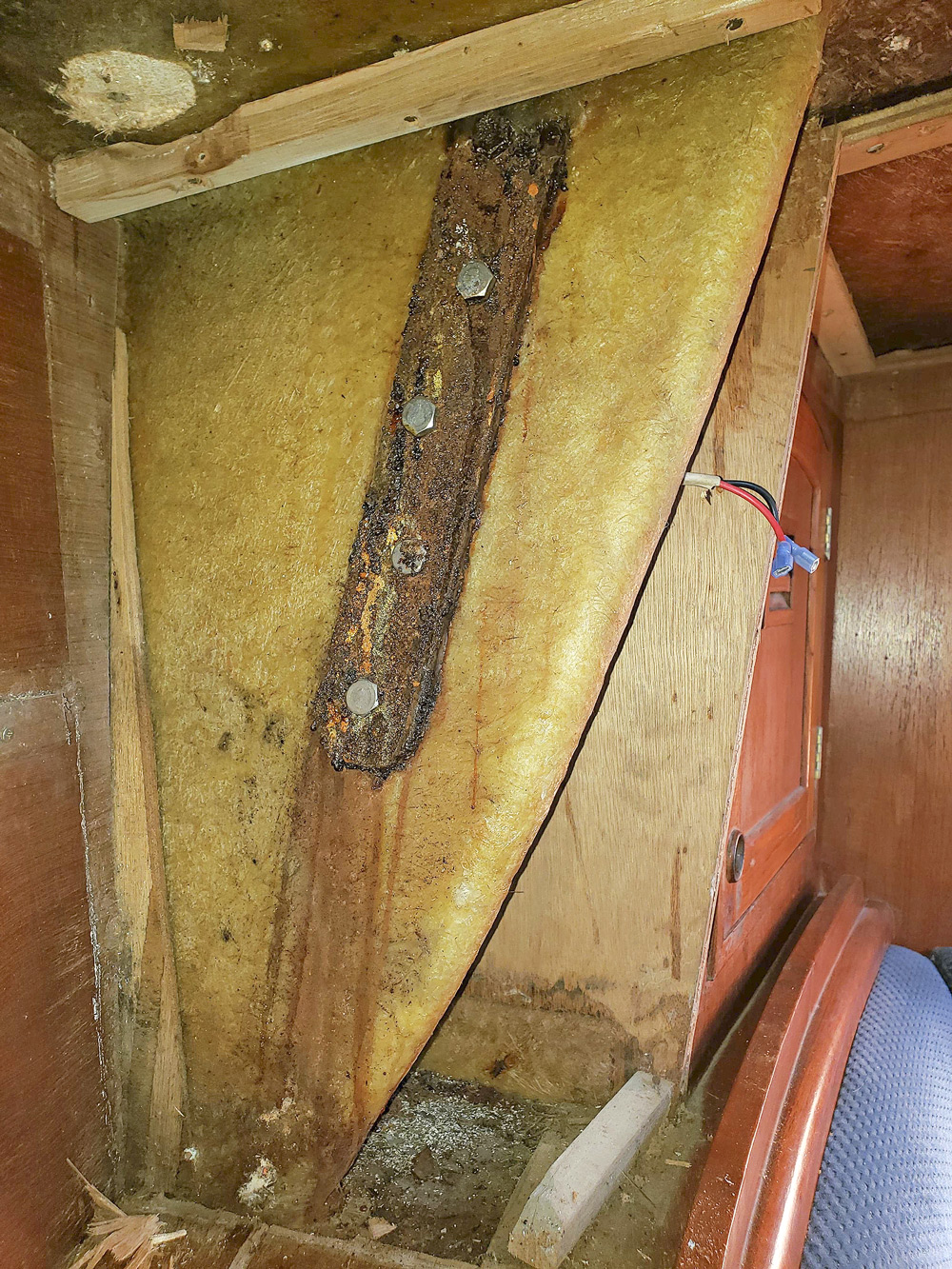 Before the couple ever went sailing, the chainplates were removed. It turned out to be a good call as they were badly corroded.
Chris Neely photo

thorough inspection before going sailing even once, and thank goodness we listened. After removing the chainplates, or what was left of them, Chris and I were completely astounded that the rig was still standing.

Stainless should be resistant to corrosion if fastened with similar metals, however, the problem with stainless or aluminum is that they both have inherent corrosion resistance naturally until you remove oxygen from the equation. In our situation the chainplates go through the deck, and the bedding compound removed most of the oxygen but not the water, leading to drastic crevice corrosion. When he removed the forward lower chainplates, Chris bent the ⅜-inch thick plate in half and then in two using nothing but his hands, a demonstration not of any superhuman strength but of massive corrosion.

This was one of easier projects we took on, but it was so important to check off the safety list. If your boat has chainplates older than 20 years, it’s time to replace them. Moisture that corrodes them is often found in the deck, so to prevent the problem in the future, wet deck core around the chainplates should be removed and replaced.

One of the things we realized early on was that the entire boat needed to be rewired. There were abandoned wires and others that made no sense, and the entire system was showing its age. Since a complete rewire was in our future, we decided to upgrade from our absorbent glass matt batteries to lithium iron phosphate battery cells

We spent weeks researching and decided to build our own battery bank. With the rapid development of LiFePO, the prices have dramatically decreased for “DIY”  battery systems. What would have cost $4,000 dollars five years ago, is now around $2,000 or less, making large battery capacity in the preferred battery chemistry finally available to those on a tighter budget. For $1,810 dollars we built our 360Ah LIFePO battery bank using eight CALB 180ah polymer-cased cells and a 200-amp 12-volt Daly battery management system.

Building our own battery bank had some benefits including being able to swap out cells or the battery management system if anything were to ever go wrong. 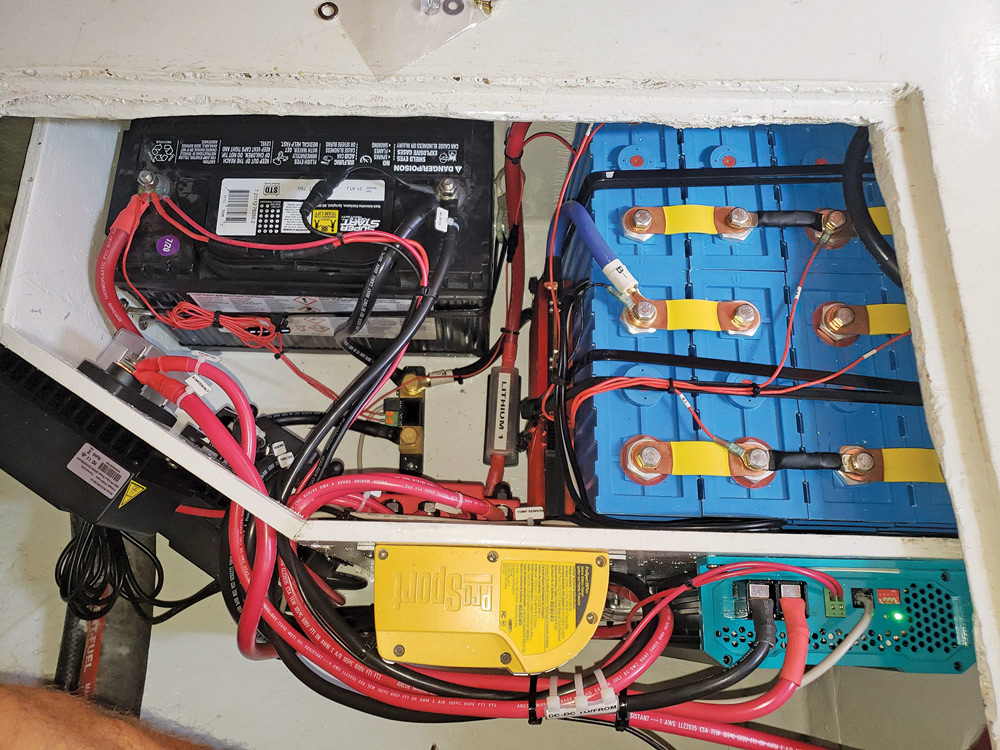 The couple built their own battery system and relocated it to the aft cabin, away from the companionway where it was susceptible to water intrusion.
Chris Neely photo

We moved the battery bank from under the companionway  to underneath our aft stateroom bunk to keep the batteries safe from water and to help balance the starboard side of the boat. After taking the measurements of our batteries, Chris built a new battery box out of plywood and fiberglass to hold the batteries in place and protect both the batteries from potential moisture and to be ABYC compliant in case of battery failure.

While we waited nearly two months for the batteries to arrive from China we worked on rewiring the boat and, relocating the DC and AC panels to our newly constructed nav desk partition. The rewiring project exposed many, many meters of corroding wire. It seemed ripe for a potential fire without attention. Over the course of a week, we ran all the wires throughout the headliner, walls, bilge and bulkheads. Every plug, wire, connection, breaker, switch and bus bar was replaced. Once the lines were complete Chris had installed a new electrical network in Avocet with our new Lithium battery bank as the new heart to make our 40-year-old sailboat a benchmark for efficiency, reliability and safety being the cherry on top and marking this project as completed.

After installing all the cells and hooking up the battery manganese system. Chris ran the battery through its first charge up to 14.6 volts and cell balanced before running the battery bank all the way down to its 20% charge rating of 12.85 volts.  This helped ascertain a better understanding of the battery capacity and cell health. Using the 80% rule, in which you only run the batteries down to 20% to prolong their lifespan, on paper our battery capacity of 360ah is only usable to 288ah.

After four days of normal continuous use, we finally depleted the battery bank down to 12.85 volts and measured 315ah consumed using our Victron bmv12 battery monitor. It is not uncommon to have a healthy lithium battery test higher in capacity than on paper and Chris was delighted that his efforts in building a high capacity battery paid off. There are many different ways to treat your lithium battery well to get the 4,000 battery cycles including not overcharging, not depleting the battery past 20% and not charging in low temperatures.