Losing steering is an emergency, but it’s one that you can prepare for by having a plan tucked away in the back of your head. When a boat loses steering you know it quickly. Sometimes there’s clunk and sometimes all feel on the helm is lost, but either way the boat is likely to head up into wind and there’s nothing you can do to stop it. 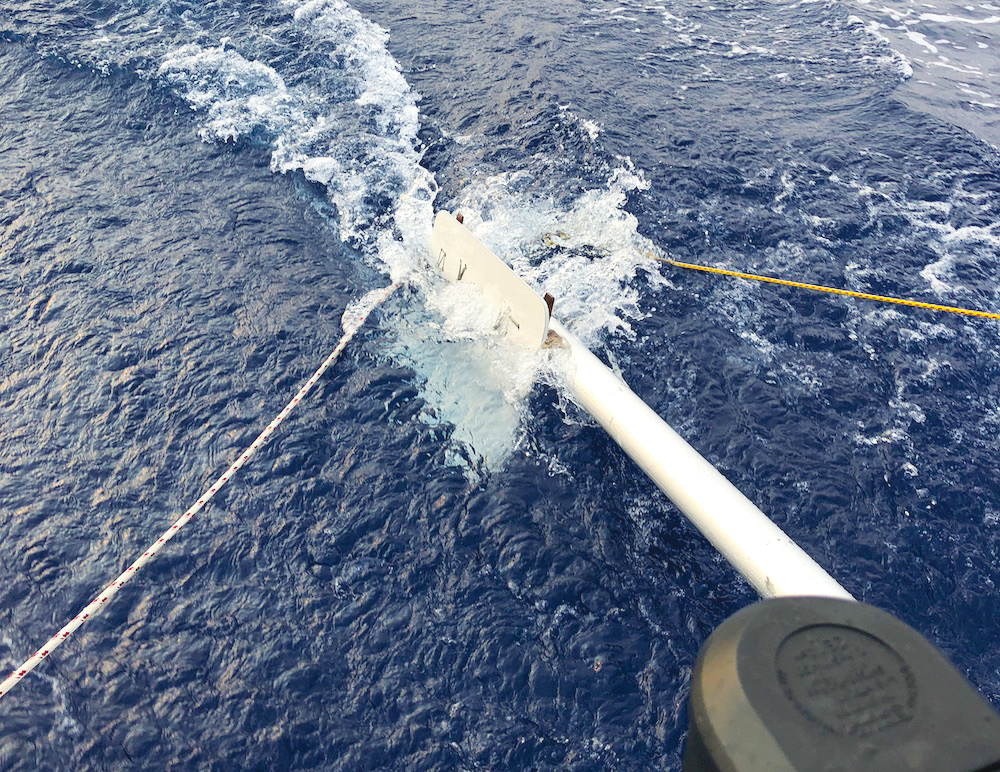 When the carbon fiber rudder post on the Blue Jacket 40 Bailiwick lost its rudder in the 2018 Bermuda Race, the crew used a bulkhead panel lashed onto a whisker pole to create an oarlike rudder.
Chris Museler photo
There are two main reasons for losing steerage: Rudder failure or steering system failure. The first is more dangerous because the rudder post leads to one of the biggest holes under the waterline. If the rudder post breaks, it’s likely that a huge hole has just been created and water will immediately start rushing in. At this point the emergency has gone from a lack of steerage to potential sinking.

The first priority is to seal the hole by jamming whatever you can in it. Use cushions, fenders, towels, a bucket if it fits, or anything else you can jam in the hole. You’ll never be able to completely stop the water, but the goal is to get it to a point where onboard pumps can keep up with it. Offshore sailors may want to carry a skirted rubber sleeve specifically for this purpose.

Once the immediate crisis is under control and water ingress is manageable, you can start jury-rigging a steering solution. 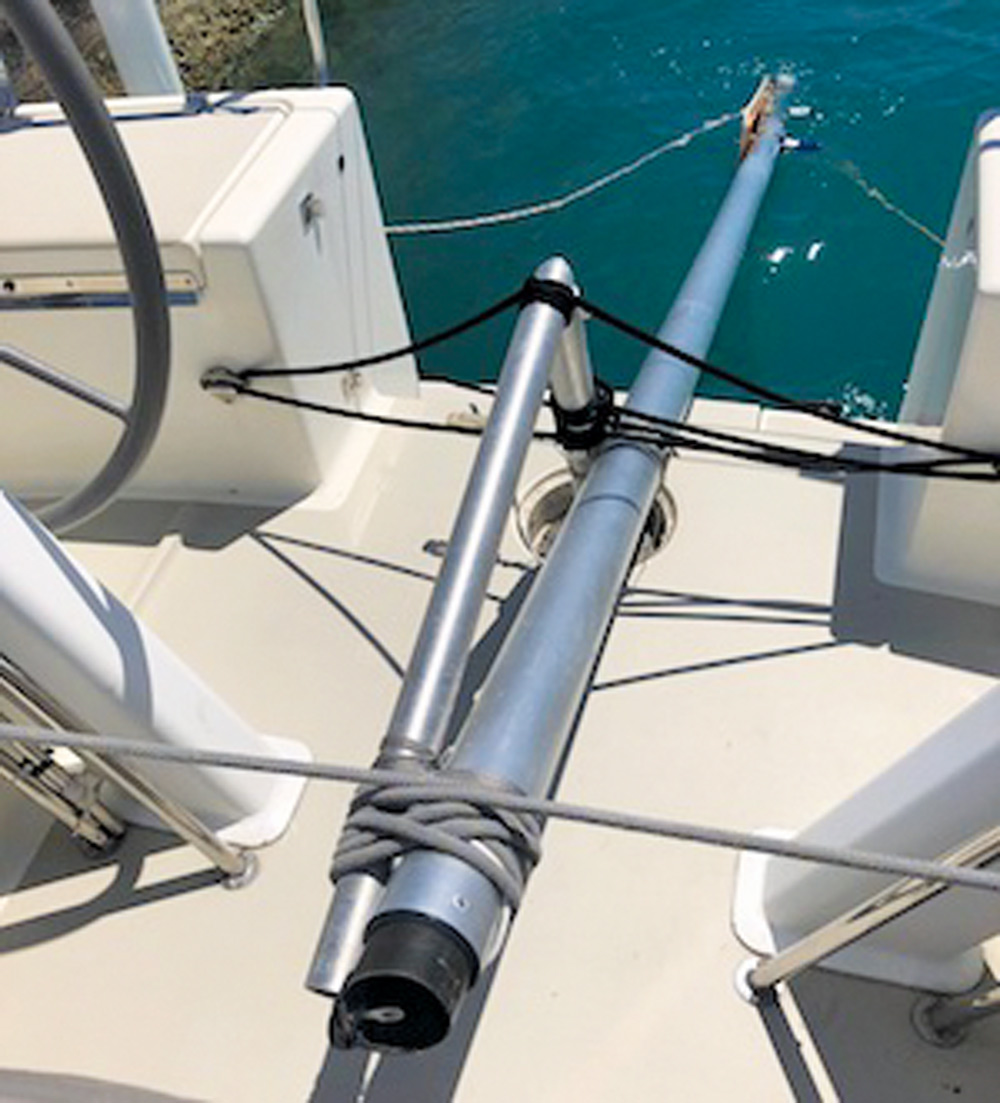 They controlled it with two lines to the panel led to cockpit winches.
Chris Museler photo

There are ways to fashion a makeshift rudder, but all are easier to manage if you have planned for the situation in advance and have some parts and tools on board. A spinnaker pole can be used alone to provide some steerage or a floorboard,  door or panel can be attached to create an oarlike rudder. Obviously there are tremendous forces on whatever is attached to the end of the pole, and this is where metal strapping and other attachment methods along with a drill to make holes through the board to lash it to the pole can be helpful.

Once you’ve rigged up the makeshift rudder, it needs to be secured to the boat. It can be lashed to the base of the backstay or some other secure point roughly at the stern’s centerline. Depending on the angle, a line holding it close to the transom near the waterline may be needed. The topmost attachment point should be about at the midpoint of the pole so there is plenty of pole to use as leverage for steering.

Once it’s securely attached, rig up a method to control it. One way that can work is to tie lines from the onboard end of the pole leading to snatch blocks or turning blocks at either corner of the stern, then to winches. If this doesn’t provide enough leverage, lines could be lead to rudder board or in-water end of the pole, then back to blocks on board. The angle is likely to limit fine control but can provide stability and some leverage. They controlled it with two lines to the panel led to cockpit winches.
Chris Museler photo

If jury-rigging a rudder isn’t possible, using drag to steer the boat is an option. The idea is to affect the direction of the boat by changing the angle of whatever is dragging behind the boat.

A drogue is an excellent choice for such duty but in the absence of one, buckets, sail bags or duffel bags can be called into service. The key to making this system work is to have long enough lines—200 feet or more— from which set the drogue. Anchor lines and spinnaker sheets are probably the most likely options.

Another sheet can be used to create a long bridle with a large shackle fixed at the midpoint and led to the aft quarter and forward through blocks to winches on either side. The long trailing line is then connected to the bridle shackle to reduce chafe.

It is helpful to add some weight in front of the drogue or drogue stand-in so that remains submerged and pulling rather than skipping along the surface. This can be a bit of chain or anchor sentinel. When the system is constructed, slowly pay out the line, centering the drogue and bridle to begin with. Steering is accomplished by adjusting the bridle lines, tensioning the bridle line on the side you wish to steer the boat to and easing the line on the other side. To turn to starboard, ease the port bridle control line and tension the starboard line.

Sea anchors may come equipped with a bridle to simplify deployment.

If the rudder is intact and the issue is a steering system failure, there can be a relatively easy fix. Every boat should carry an emergency tiller and know how it works. Fitting it will vary from boat to boat and in some cases may require removing the steering wheel. It will fit into the rudder stock, likely through an inspection port. But simply installing the emergency tiller doesn’t do much to help the cause. It will likely do a pretty good job of keeping the rudder straight, but actually steering will again require some jury-rigging.

In most cases the effort will be aided by rigging up lines from the tiller to blocks on the each rail and then to winches, once again using the control lines to steer.

Once an emergency tiller is fitted, if conditions allow it may be possible to effect a repair on whatever went array. Often this may be a broken steering cable. Carrying a long length of Dyneema line the diameter of the steering cables is a light and space-saving backup that’s good to have on board. It goes without saying that regularly inspecting the steering system to catch potential failures before they cause an issue is the smart approach.

Steer with the sails

A bridle controls the position of a drogue or sea anchor, adjusting the boat’s course. Bridle lines will have to be run to cockpit winches for control.

No matter what approach you take to jury-rigging a steering system, all will be lacking in control from a proper system, and this is where the sails come in. Reducing sail will be helpful in most cases. Excessive helm is never good and especially without proper steering. The goal is balance to keep the boat heading on a relatively steady course and to ease or trim to help turn the boat. Backwinding the jib will help pull the bow through the wind when tacking.

Similarly, jibing can be aided by backing the jib or even the main (carefully, and only in light air) to windward. Moving crew weight around can also help with steering. Roll tacking by having the crew heel the boat first to windward and then to leeward through the tack (think like a dinghy sailor) can help. And even moving crew weight fore and aft can assist in light air.

In every case, constant attention to sail trim will be required.

Since every scenario is different there is no one system that can be applied to every steering system loss. Undoubtedly any plan will have to be tweaked and refined.

Losing steering is a true emergency but it is also an opportunity for seamanship skills to shine. Working through various scenarios ahead of time will help if the worst does happen.