A passage to Sweden

Throughout the trip we were all challenged to operate outside of our comfort zone. Andy and Emma never put us at risk but asked us to embrace the unfamiliar. No event reinforced this aspect of the 59 North experience than seeing Michelle steer a perfectly executed close quarters tack to clear a large ship and then pass under the expansive Oresund Bridge that connects Denmark and Sweden. The smile on her face said, “I’m really doing this.” 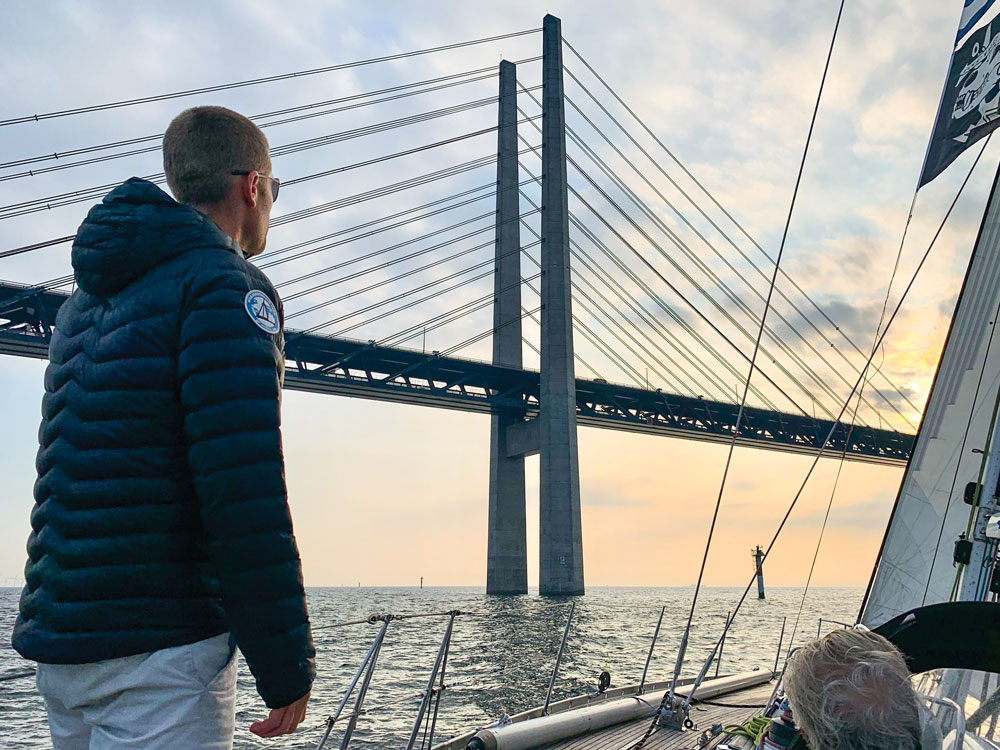 As we entered the Baltic Sea, the wind diminished to a whisper. A pre-trip weather briefing had predicted lighter winds and the larger headsail we had hoisted in anticipation fell limp. It was time to start the engine and reassess the float plan. Since the wind was not expected to return for yet another day, Andy suggested we head toward the medieval walled city of Visby on the island of Gotland. The change of plan would eliminate Aaland as a stop, but the thought of motoring for another full day was hardly a favored option. To Visby it was. No learning opportunity is wasted aboard Icebear, even with the iron genny running. Emma emerged from below with a length of Dyneema. “Time to learn how to splice,” she said. The crew gathered for the hands-on instruction beneath the warm Nordic sun as the autopilot kept us on course. Andy spared no criticism when appraising the results. Our first time handy work wasn’t all that pretty.

We entered Visby’s harbor to find the city marina nearly empty, the benefit of an off-season arrival. Emma docked Icebear with ease, as if it were a VW Beetle. After a welcome hot shower, the crew climbed a steep cobble stone street for an all hands dinner of galettes and French cider. Gravity helped our descent back to Icebear where we all got a good night’s sleep to ready us for a day of exploration. The next morning I rented a bike and peddled five miles north along the coast to a popular outdoor breakfast spot. I felt at home among the locals where children laughed and played while the adults sipped their morning coffee. On my return, I rode the back streets of the city scouting places for a planned walk about that afternoon. Visby’s timeline goes back to the 12th century as evidenced by the well-preserved timber buildings and stone churches. I found the skeletal ruins of St. Katarina Cathedral particularly inspiring. Now, roofless, the ancient spirals reached toward the sky after nearly 900 years. I closed my eyes and swore I could hear the echoes of Latin chants reverberating off the stone walls. I walked the city botanical garden, still green in the fading summer and after some window shopping, found a small cafe where I indulged in an delicious deluxe hot hog, an Oscar Mayer wiener it was not.  At day’s end, the crew regrouped around the saloon table for dinner onboard and an early-to-bed mandate by the skipper who wanted us underway at 0415 the next day. 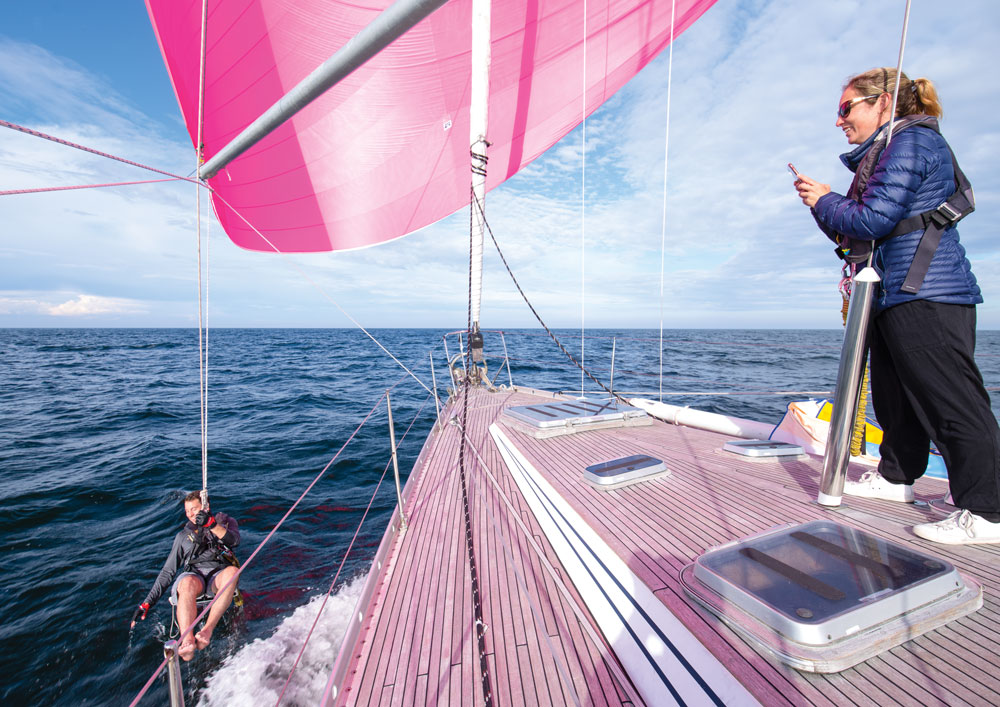 The crew takes turns riding in the bo’sun’s chair for a quick dip in the cold Baltic Sea.
Karl Westman photo

Our early departure was planned to take advantage of a southwesterly that would push us north to the Stockholm Archipelago. At first light we set the spinnaker known as Big Pink. Andy choreographed the all-hands process with the help of Emma’s artfully sketched diagram to remind us of the purpose of each line. Andy and Emma are engaging educators, leading us by showing rather than by telling. The florescent pink chute filled without a hitch and what followed was a stunning sun-filled 12 hour broad reach. Our course and speed were so steady that Andy, who is always eager to raise the fun factor, set up an onboard amusement ride of sorts. Michelle, Mike and Bryan each took turns in the bosun’s chair, suspended from the spinnaker pole, being dipped in the chilly Baltic Sea in the pink glow from above.

As rain clouds approached we doused the chute and turned west to enter the archipelago. We found a secluded anchorage just west of the island Sandhamn, some 30 miles east of Stockholm. We would make our final approach through the many islands with the benefit of a night’s rest and full daylight.

Our last day onboard was nothing less than magical. We piloted our way though the maze of rocky islands, reminding ourselves that “red right returning” doesn’t apply in this part of the world. Keeping green markers to starboard, we played hide and seek with a massive cruise ship that appeared and disappeared behind the many islands that dot the entrance to Stockholm. I was at the helm when the city came into view. It was then that I realized what a thoroughbred Icebear is. Close hauled, she pointed beautifully in light winds and on flat water. Andy woke me from my blissful stupor.

“It’s my turn to have some fun,” he said as he took the helm for the final mile. Looking skyward we noticed a drone hovering above us.

“That might be one of our friends,” Andy said. I believed him.

The pop of the champagne cork heralded the end of the trip. The crew toasted our achievements big and small. Eight days earlier we had greeted each other with a cordial hello and handshake, today we sat in the cockpit united by a shared experience that would not soon be forgotten. As for my Atlantic crossing? The pandemic may have altered the paths of us all, and it has forever changed my perspective. I don’t for a minute regret not making the crossing. Maybe someday I’ll make the passage, but for now I’ll take Andy’s advice and “head toward” that dream. It’s best to remain open to change.