A sailboat is a sailboat, right? In general, the answer is yes, but if you’re looking to maximize performance and sailing pleasure the differences between monohulls and multihulls, make a big difference.

Whether you’re a monohull sailor looking for a bigger boat for chartering adventures, or thinking about switching up and owning a multihull for its stability, space and speed, the distinctions in how to sail a multihull versus a monohull can make a big difference to your approach.

Monohull sailors need to rethink some aspects of sailing that may be ingrained from years experience. This is particularly true when it comes to sail trim, which monohull sailors come to know by feel.

“On a monohull you point, set, and feel that almost instant gratification when sailing upwind of the boat heeling over and speeding up,” said Randon Finkelstein, Offshore Sailing’s U.S. regional manager. 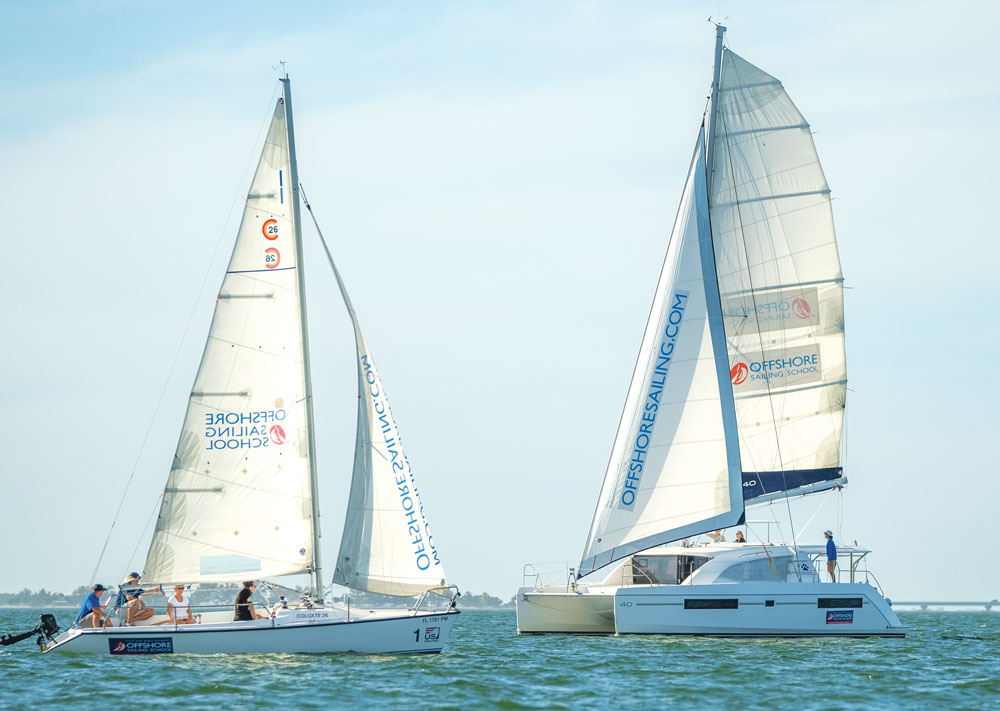 Monohull sailors may need to set aside long ingrained approaches to sailing when they step aboard a multihull but the basics remain the same.
Monohulls also autocorrect, albeit somewhat unpleasantly, by rounding up, and slowing the boat. But multihulls don’t have that built-in check valve, nor do they settle in to an angle of heel that feels about right to experienced monohull sailors.

“A cat on the other hand is much more subtle,” he said. “In my opinion a catamaran is more like flying a plane, you must hit the right ‘buttons’ in the right order and the next thing you know you are flying! Coming from a monohull it can be deceiving that you are sailing well, even with poor sail trim, or what I like to call monohull trim on a cat, a catamaran can still do a reasonable 6 or 7 knots. What there is to learn though is that you could be going so much faster.”

Proper trim on a multihull really comes down to speed. Because multihulls accelerate faster and often sail faster, the apparent wind is pushed forward. So where on a monohull you may be able  to set it and forget it, perhaps only adjusting trim for significant changes in wind velocity, multihull sail trimming requires a staged approach.

As the boat accelerates to top speed the trim will need almost constant trimming because as the speed increases, the apparent wind moves forward. The same phenomenon happens on monohulls, particularly high-performance boats, but the effect is less pronounced on the typical boat.

Perhaps the biggest mental shift monohull sailors need to make when they step aboard a multihull involves sailing upwind. Monohull sailors are used to an upwind slog when necessary and perhaps even take a certain amount of smug satisfaction in making way to windward while their multihull brethren are stuck sailing much wider angles. So instead of thinking about pointing, reframe your thinking on a multihull to focus on velocity made good. A big catamaran is never going to point like a monohull, so think instead about finding the most efficient angle to get where you need to go, which will likely involve cracking off a bit. Of course when sailing to a point upwind multihulls will cover more miles getting there, but it won’t necessarily take longer.

VMG and its sister stat course made good are calculated on some instrument systems but if that information isn’t available a bit of chart calculation along with keeping track of tacking angles will give you a good sense of a particular multihull’s sweet spot for making headway.

“On an upwind leg a monohull may be able to point 10 or more degrees higher than a catamaran but it will ultimately go slower than a catamaran on close reach, sometimes by 3 knots or more,” Finkelstein said.  “This means that although it is aiming closer to its destination, the catamaran will beat it to the finish line because of its vast speed advantage. The same can be said going directly downwind for a monohull and a catamaran staying at a broad reach while feathering up to increase apparent wind and speed and gradually turning deeper to keep that apparent wind angle and speed.”

The basic principles of sail trim apply to all boats, but avoiding over trimming is particularly important on catamarans, where stalling out sails can have a dramatic effect on speed.

Big cruising catamarans often lack a lot of sail control methods, including boom vangs, so sailors must work with what’s available. Just like trimming on a monohull, putting the traveler at the centerline is usually a good place to start. Adding in more twist than you might on a monohull is often helpful.

Trim the main and genoa to have similar leech curves, and bringing the jib car aft  will add twist and keep the leech open.

“You cannot beat the feel of sailing a monohull and the boat communicating to you what it needs,” Finkelstein said. “But there is something special when you hit all the right buttons and crack the puzzle on a catamaran to take it from 3 knots to more than 9 knots in a matter of seconds.”