Home . Articles . News . Features . How to be ready for the worst-case scenario

How to be ready for the worst-case scenario

How to be ready for the worst-case scenario

Like those who fail to plan for home evacuation in case of fire, most sailors tend to ignore the possibility of a helicopter rescue. Should one become necessary, there are specific steps that must be taken to ensure passengers and crew exit safely. 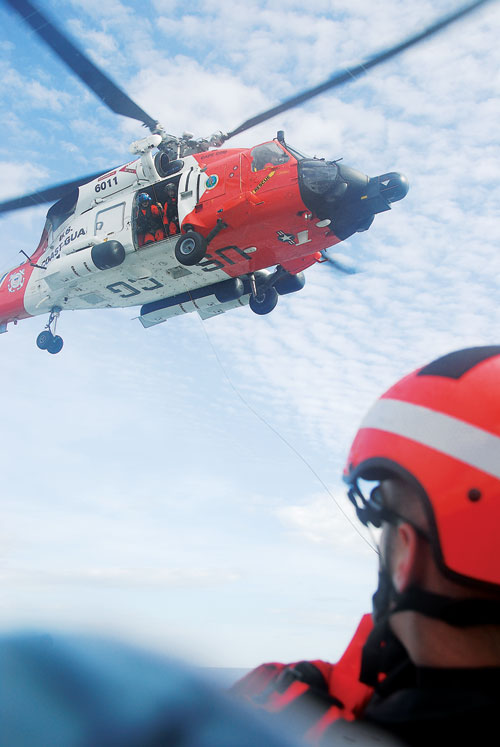 SAILING discussed different emergency situations with helicopter pilot Lt. Cmdr. Doug Atkins and rescue swimmer Aviation Survival Technician First Class Joel Sayers from the U.S. Coast Guard Air Station on Cape Cod, Massachusetts, who offered sound advice on how to give this dangerous procedure the highest chance of success. Atkins completed two deployments to the Persian Gulf as a U.S. Navy pilot before joining the Coast Guard. He spent six years as a rescue pilot in Alaska and has been assigned to Air Station Cape Cod since 2007, where he serves as operations training officer. Sayers has been a U.S. Coast Guard rescue swimmer for 11 years.

Basically there are two hoisting scenarios-abandoning ship, or a medical evacuation to remove a sick or injured crewman. In the latter, the boat is secure and maneuverable, so the focus is on coordinating the hoist and monitoring the victim's medical condition. In either case, there are some basic rules, the first being don't panic.

If the boat is sinking, issue a Mayday on VHF channel 16 and activate the epirb, if available. (The epirb should be freshly registered before leaving the dock.) Be prepared to switch to another radio frequency, such as 21A or 22A, when instructed. If beyond shore-based VHF radio range, call by satellite phone. Make sure you know the number for the Coast Guard rescue center in the area you are sailing.

Assess the situation and describe to authorities the conditions aboard the boat (this will help the rescue crew determine what supplies to bring along). Is the boat taking on water? If so, tell the Coast Guard so that additional pumps and life rafts can be brought to the scene. Is anyone sick or injured? If so, affix a tag to the victim with a note on injuries. Is there a nurse or EMT aboard? If so, pass that information along. If time allows, pack a resealable plastic bag with the victim, containing identification, medication and personal contact information. 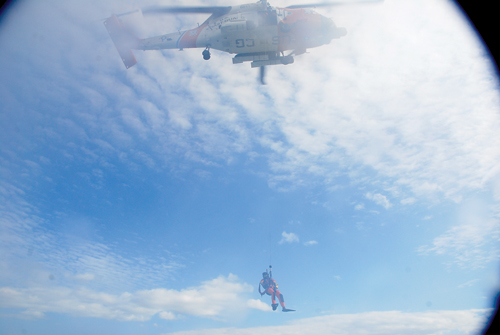 Prepare the boat as though anticipating a hurricane, keeping in mind that an HH-60 Jayhawk helicopter can send 60- to 70-knot winds straight down onto the deck. Start your engine and drop all sails. Tie an extra sail tie around the roller furler to ensure it doesn't unravel during rescue and put extra ties on the mainsail along the boom. Duct tape and plastic tie-wraps can help secure sheets and halyards.

Stow loose deck equipment such as fenders, cockpit cushions, coiled lines, gas cans, rail-mounted barbecue grills and anything that might break free and damage the helicopter rotors or become a projectile. Lash down sports equipment such as kayaks, bicycles and dinghy. Secure hatches and lower flag staffs and antennae. If possible, remove the bimini and dodger. Even remove your hat. It too can be sucked into the helicopter engines and create problems.

Considering the rescue from the pilot's point of view can help you plan your rescue. First, from an altitude of 500 feet, it's hard to spot a boat in a choppy sea, and that swaying mast is always a danger to the helicopter.

The pilot cannot approach if your dinghy is trailing off the stern. The helicopter's rotor wash will flip it like a kite, creating potential danger for the rescue crew and the sailors in distress. To remedy this situation, lash the boat to the deck or, at least bring it along the starboard side using a series of bow and stern lines. 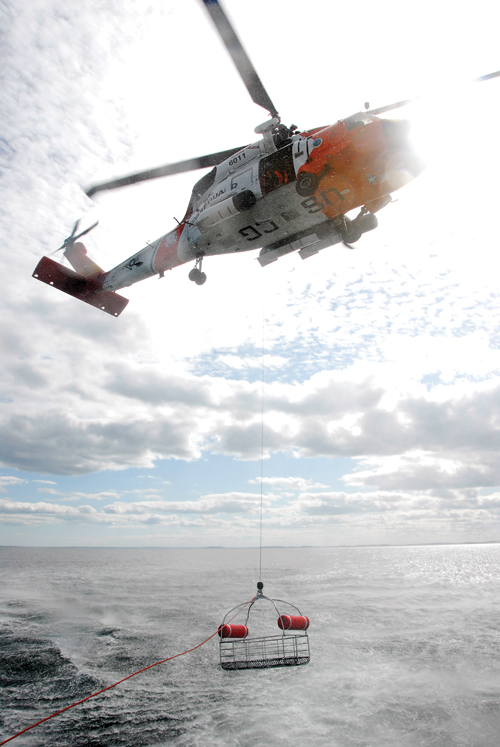 The wind direction is a factor. The pilot will likely approach from the stern with the nose of the helicopter positioned to port. This gives the pilot, who is seated to starboard, the most advantageous view of the sailboat. It also allows the rescue crew to view the boat from the open helicopter door.

The pilot and rescue crew will assess how best to proceed, deciding whether to hoist the victims directly from the sailboat or from the water.

Never fire a flare or shine a spotlight directly at the helicopter. New night-vision goggles are capable of reducing glare from lights and aerial flares, but these can still make it difficult for the pilot to see when close to the boat. Use a smoke signal in daylight and an incendiary flare at night.

Listen for the pilot's instructions on your VHF radio. In most cases, instructions will first come from a fixed-wing aircraft such as a Falcon jet or C-130. It will be almost impossible to talk by radio once the helicopter is hovering over the sailboat because the jet engines are noisy.

Ask yourself if abandoning ship is really necessary. (Atkins emphasized the risk of a hoist must be weighed against risk of remaining on the boat. He noted that sailboats are typically sturdy and won't sink if not taking on water. He cited the 1991 case of the 32-foot sailboat Satori, abandoned during what became known as the "Perfect Storm," which was later found washed up undamaged on a Maryland beach.

Everything is easier in daylight. Night-vision goggles are a great tool, but nothing beats the human eye on its own. A hoist evacuation at first light will be much safer and have a greater chance of success than one conducted in the middle of the night.

The pilot will tell you to maintain a certain course heading and speed. Assign someone to the helm. Atkins recalled one rescue in which the helmsman repeatedly looked up at the helicopter as it approached, leaving the sailboat zigzagging in the waves. Don't depend on the autopilot. It can't correct course as fast as a human, especially when the boat is being blown by the helicopter's rotor wash.

If the helicopter crew determines a direct hoist from the boat cannot be performed safely because of the conditions, you will be asked to get into your raft and cast off from the boat or enter the water. The rescue swimmer will be deployed to the water to help hoist you to the helicopter, either in the rescue basket or in a sling attached to the swimmer. If you are in the raft, you will be asked to get into the water one at a time so that the swimmer can assist you. Wait for a signal from the helicopter crew.

Once the basket is winched to the helicopter door, wait until the basket is swung into the aircraft before attempting to get out.

Considering the rescue from the rescue swimmer's point of view also can provide tips. Sayers said that sailors can be too helpful and some strong, overzealous sailors have hauled him aboard, sending him smashing into the steering wheel, binnacle or other unforgiving structure. Let the swimmer board from the stern without interference. Swimmers typically wait for a wave to lift them close enough to grab hold of the boat.

If you want to help, put a ladder over the side and toss a heavy mooring line overboard with a life ring or life jacket attached to the end. Thin poly line can cut through the swimmer's gloves and is difficult to grip. If the deck is spacious, the swimmer may be dropped directly aboard, presuming there is room to maneuver a Stokes rescue litter, in which a victim with neck or spine injuries can be strapped and hoisted.