Home . Articles . News . Features . On a slow boat to Mackinac

On a slow boat to Mackinac 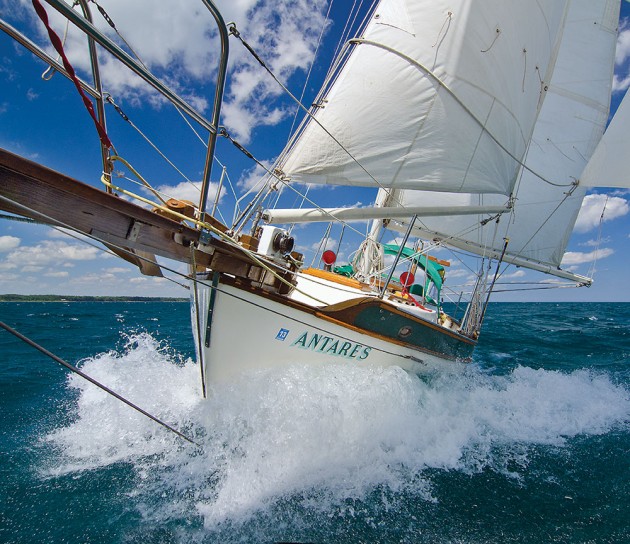 Long ago, before engines, sailors had to wait for wind, and that's exactly what I did for hours. My Westsail 32 Antares sat on a motionless sea. The current flowing down into the river carried me slowly back south-I was making negative progress. The boat drifted in circles. The stillness was complete. Finally, mid-afternoon, a zephyr stirred the water and the sails gently filled. A line of bubbles trickled off the rudder and I turned the bow northward.

Most sailboats take days to cover the distance from Port Huron at the south end of Lake Huron to Mackinac Island. Race boats sometimes make the course in less than 20 hours, but aboard Antares I had no illusions of matching their speed, as she is better suited to ocean tradewind sailing than to the often light and fickle breezes of the Great Lakes in midsummer. After motoring against the strong current of the St. Clair River from Detroit that morning, I was determined to sail the entire distance to Mackinac Island, regardless of how long it took. Anyone can motor through calms and headwinds, but I had plenty of time, lots of patience and shelves full of books.

The five Great Lakes are the defining feature of America's heartland and stretch 1,000 miles from eastern Lake Ontario to Duluth, Minnesota on Lake Superior. These freshwater seas are home to some of the best cruising grounds in the world. On Lake Huron it's about 240 miles from the lake's southern end up to the Straits of Mackinac at the top of Michigan's lower peninsula. Just to the east of the Straits where Lake Huron and Lake Michigan meet is Mackinac Island. A popular summer resort destination, this historic island is famous for its beautiful hotels, mouth-watering fudge and a long-standing policy that prohibits motorized vehicles.

The sun dropped slowly over the Michigan shore, the breeze picked up and I watched houses and little towns move slowly by along the coast. The wind stayed with me all night long. Twinkling shore lights dropped below the horizon and Antares followed Polaris out onto Saginaw Bay. Beyond the sight of land, but for the moon and the stars and the open sky, I was completely alone. The quiet sound of water gurgling against the hull softly filled the night and the compass light glowed dull red like the embers of a dying campfire.

Morning found me making good northward progress, but by noon the wind was gone. I sat for hours under a hot sun in the mirrorlike stillness of the empty lake. Only a distant passing freighter spoke of the busy, active world beyond the horizon. At nightfall I was sailing again and the weather radio warned of strong winds and rain. A pale moon shone through thin clouds, then faded from sight as storms approached. Lightning flashed and I heard the drum beat of distant thunder. I took in most of the sails and Antares slowed to a crawl. Stripped down she was in fighting form, ready for battle.

With a sudden blast the storm was on me, tossing the boat like a bathtub toy. Wind shrieked in the rigging and Antares tore blindly through the black night. In white-hot bursts of lightning I glimpsed foaming wake boiling off her bows. Thunder boomed like an artillery barrage and torrents of cold rain struck with a thousand hammer blows.

Then, quickly as it arrived, the storm moved on leaving Antares rolling in a confused sea. A north wind filled in, and for the rest of the night and well into the next day I tacked back and forth making slow progress toward Mackinac. Bashing my way into steep seas, my progress up the coast took forever. I finally sailed into the protected harbor of Presque Isle, glad for a break.

Presque Isle is at the northeast "corner" of Michigan's lower peninsula and from here the course toward Mackinac turns more westerly. I've always considered myself to be officially "up north" in Michigan when I reached the pine-covered shores and the crystal clear waters of Presque Isle. It was good to be back. By good fortune Independence Day fireworks were scheduled that night. In the long summer twilight, it was well past 10 p.m. before the show began and I enjoyed it from front row seats aboard Antares.

I spent a peaceful night anchored in the little bay protected from the north wind. By morning all was calm. I waved to a couple from another cruising boat that rowed by in their dinghy. "Need a ride ashore?" They called. We shared war stories of yesterday's storm over breakfast at the harbor restaurant.
Through cool, still woods I walked out to the original Presque Isle Lighthouse built in 1840, now converted to a museum. Yellow daises waved below its white tower and the aquamarine water reminded me of the Caribbean. Back aboard I wasted not a minute weighing anchor when a northeast wind arrived. Time to go.

It was still 60 miles to Mackinac and although the breeze was light it was good to be moving again. Under spinnaker I passed Rogers City, Michigan and watched the dark red sun set through low clouds. A full moon, bright as a searchlight, reflected off the glittering water. It was a beautiful night. My spirits, already high, rose along with the building northeast wind that carried with it the land smells of deep woods and endless pine tree forests.

I made my way carefully up around the north side of Bois Blanc Island (know locally as "Bob-Lo"). Bois Blanc lies just to the southeast of Mackinac, its waters littered with treacherous reefs and keel snaring shoals. Powerful lighthouses and blinking navigation markers guided me safely through the night.
A kettle of black coffee whistled softly on the stove below. With the island's rocky shores to lee, even a catnap was out of the question. Ahead, Mackinac Island lay sleeping on the surface of the lake. And farther beyond, a graceful chain of lights outlined the five-mile-long Mackinac Bridge that connects Michigan's two peninsulas across the Straits.

Just as I entered the narrow channel between Bois Blanc and Mackinac a mammoth freighter swept close by. A black wall of steel towered above, blotting out the stars, and Antares rolled in the passing wake. I started the engine and motored into Mackinac's quiet harbor. Not a soul was awake to greet my arrival.

The anchor splashed into the dark water and Antares was at rest after her long voyage. I sat on deck enjoying the softness of the summer night and watched the moon and the planets in the starry sky. Finally, dawn lightened the surrounding hilltops. Sure that the anchor had set and that all was well, I went below. I could explore the island in the afternoon.