It’s a testament to the progressive design of the original J/97 that the new boat, the J/97 Evolution, required only modest design upgrades to make it stylistically competitive with the brand-new designs of 2015.

J/Boats considers the 97E a dual-purpose offshore boat. Its sail area-to-displacement ratio is 19, which is in the cruiser range, but its displacement-to-length ratio of 204 is in the racer range. That means the boat is easily handled, but it can turn some speed on too. The original J/97 put up an impressive race record, and the 97E will stay in the 97 class, racing with its older sibling. 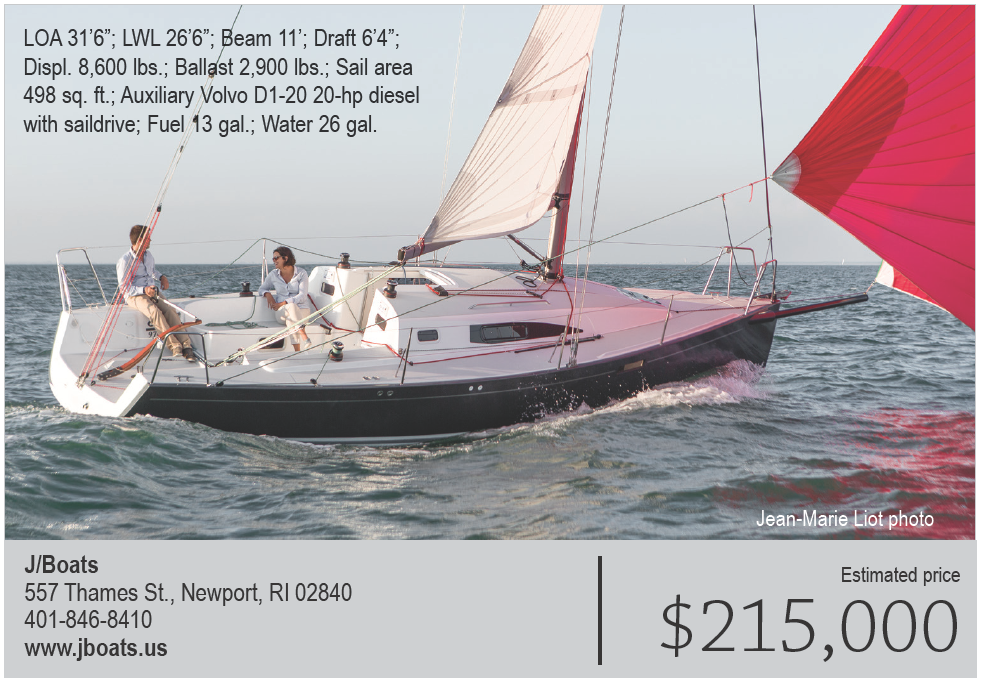 The 97E’s new hull ports and cabin ports are designed to send more light into the interior, and lots of light belowdecks is certainly a trend in modern production boats, especially those of European design. The cabin port is a long triangular window at least twice the size of the original port, and the rectangular hull port is completely new.

Like all performance boats, the original 97 has a traveler, but the knee-high track across the cockpit makes for awkward foreaft movements, especially when cruising. J/Boats opened the cockpit of the 97E by lowering the midcockpit traveler down into the cockpit sole.

With the traveler out of the way, cruisers can easily make their way aft to the transom, modified slightly from the original to accommodate the new cockpit, which is open for good access in and out of the water.

That’s all the changes J/Boats made, just a recessed traveler, open transom and more light belowdecks. A wheel is an option, but with so few changes the boat can be raced alongside the original 97s, which are known for their 6-foot headroom, retractable bowsprit, roller-furling nonoverlapping jib and berths for six people.

While the interior fits six, the space is better suited for a family or two couples. There is an enclosed head, V-berth and aft owner’s cabin. There is stowage belowdecks aft and storage for a propane tank under a cockpit seat.

The rig is fractional with swept spreaders, and the mainsail is a traditional triangle so there are no worries about catching the roach on the backstay, which is split at the bottom. The standing rigging is Dyform wire and the halyards are Spectra.

When the original J/97 was introduced in 2009, the unusually roomy 32-footer was hailed by the sailing media as a superb boat for club and IRC racing, and family cruising. A few modest tweaks to the design haven’t changed that, but now the cruisers can enjoy more sunlight belowdecks while the kids swim off the stern.