Fast and furious fun
The latest performance cruiser from Germany is loaded with bells and whistles for comfortable, fast cruising

Alate summer wind was blowing 17 knots and gusting to 26 across Rhode Island's Narragansett Bay, but the Hanse 415 stood tall and happily surfed the cresting waves. We tested the German-built Hanse 415 on a warm September day immediately following the annual Newport Boat Show in Rhode Island. It was a chance to give this thoroughbred a good workout, and we found this new performance cruiser was a real winner.

The details
The Hanse 415 is among a trio of boats designed by Friedrich Judel and Rolf Vrolijk, unveiled this year at the Dusseldorf Boat Show in Germany. Vrolijk is perhaps best known as the designer of the victorious America's Cup racer Alinghi. The new lineup includes the Hanse 385 and the Hanse 445. The Hanse 415 essentially supplants the Hanse 400, of which more than 700 were sold. But it's not merely a foot-longer version of its predecessor. It's a totally different design that's beamier, lighter and faster. 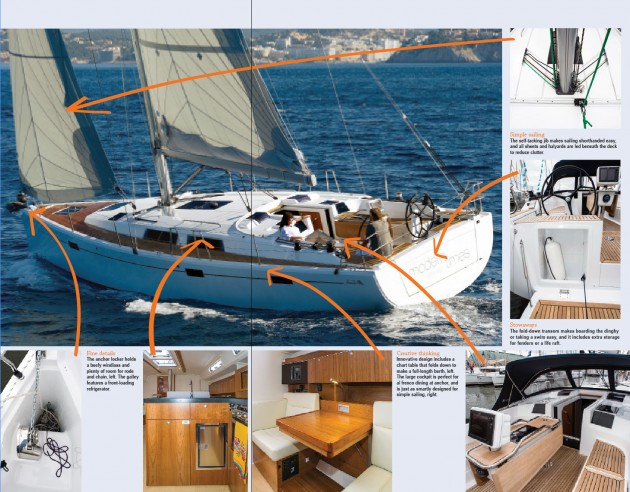 A performance racer-cruiser crafted for safe and comfortable sailing, albeit on the race course or amid bluewater, its combination of fin keel, spade rudder and adequate ballast helps keep the boat on course. The Hanse 415 is all about keeping the fun in sailing.

Given it measures 40 feet 8 inches overall, with a waterline of 37 feet 5 inches, it's not hard to envision the plumb bow. The boat comes equipped with a shallow-draft, L-shaped, 5-foot 10-inch keel, or there is the option of a deeper T-shaped 7-foot torpedo, the latter designed to increase upwind performance.

Although the Hanse 400 was built using a vacuum technique and epoxy resins, the Hanse 415 is crafted with fiberglass-reinforced plastic that allows reuse of a female hull mold during production. The completed structure is strengthened with bulkheads that are laminated to the inside of the hull. Layers of balsa and resin-saturated fiberglass increase stiffness, both in the hull and on deck. In the Hanse 415, a Vinylester resin in the first layer helps ward off osmosis. Balsa coring is used above the waterline, while below the waterline solid laminates strengthen the hull for increased safety. The keel is attached with high-quality, stainless steel bolts.

On deck
The cockpit is roomy enough for six people plus the helmsman. The angled cabintop provides an ideal backrest to stretch out along the bench seating and peer out at the vanishing horizon. Beneath each bench is a pad-lockable locker for fenders, boat hooks and other items. The expandable teak cockpit table surface includes drink holders and small storage bin.

The Hanse 415 offers a hinged transom that folds up while under sail and can be lowered for easy boarding, or used as a bathing platform when at anchor. It's an amenity likely to develop an following among swimmers, sailors of senior age or the less athletically fit. When in the up position, the transom hides yet another compartment where a liferaft can be neatly stowed.

On the clutter-free deck, opening hatches are flush on the forward cabin and saloon creating a sleek appearance complimented by the low coachroof. Deck windows open as well for additional ventilation. The track-mounted, self-tacking jib ensures a no muss-no fuss kind of sailing, a feature increasingly in demand among shorthanded sailors. Hanse is clearly taking the work out of sailing by providing features that leave more time to enjoy the actual sail.

A rigid boom vang is coupled with a German-style sheeting system. The vang is used for fine tuning. The boat features double lifelines, a bow pulpit and adequate handrails on the coachroof and along the companionway. All shrouds lead to the outer rail so sailors need not squeeze between the inner shrouds or be forced to step outside the outer ones in a pitching sea.

When the weather turns cool, the dodger canopy easily unfolds into place. Two compact hinged "glove compartments" on the coachroof provide a place for temporary storage of sunglasses, radio or other small items. When the sailing day is done, the mainsail slips into a zippered lazy bag, although in-mast furling is an option. The deck is fitted with four mooring cleats and a self-draining anchor locker with hatch. The bow has an anchor roller.

The Hanse 415 is also available with the Hanse Smart Mooring System that combines sideways-pushing bow and stern thrusters and the main drive with forward and reverse thrust all linked by a joystick control. However, the thrusters can be operated separately as well.

Down Below
Going down below isn't like entering a cave, all dark and gloomy, rather the bulkheads are white and the numerous hatches and portals flood the saloon with natural light. Ventilation isn't an issue due to the vents and hatches, nor is ceiling height in the saloon where clearance is over 6 feet. The Hanse 415 has a tinted-glass weatherboard that disappears into a compartment belowdecks, but the weight brings it down quickly so beware of your fingers.

The intelligent albeit somewhat traditional interior layout puts the galley and head near the companionway, where the helmsman or watch stander might find them most useful. Go down the steps, the galley is immediately to starboard, the head to port.

The Hanse 415 also benefits from its large hull volume that allowed the builder to divide the interior space into three sections, each of which can be configured into a custom layout based on the customer's preferences. The standard layout provides a generous V-berth with hanging lockers fitted with shelves.
With options, the boat can accommodate two double berths aft or eliminate one for use as a utility room. The head features a separate shower that can also be used as a wet locker since the boat has hanging lockers in the cabins for dry clothing only.

The navigation station is flanked by two comfortable seats. The galley is open and includes a stovetop and oven, top-loading freezer, side-door refrigerator, and a deep, two-basin sink. Faux black granite countertops give the galley an elegant appearance. The dinette can seat up to eight people when both wings are in the up position.

Checking the engine filters and fluid levels won't require wrenching your back. The companionway steps flip up for front access, and removable bulkhead panels in each of the aft cabins extend the mechanic's reach. The engine room is sound-insulated.

Under sail
The 41-footer was tethered to a mooring off Newport's Goat Island. Four of us clambered aboard, and barely 10 minutes passed from the time we stepped from the launch to when we cast off. And in that short span, everyone was able to get comfortable because of the boat's expansive cockpit and seating options. We discovered that the angled bulkheads to either side of the companionway provide an ideal backrest, unlike some seating arrangements that keep you sitting up straight.

We fired up the Volvo D2-40 38-horsepower diesel engine with twin-blade folding Flex-O-Fold prop but could barely hear it humming as we cast off. A goose of the throttle made it clear the saildrive propulsion system has enough power to push the hull through most any chop, so we switched it off in order to enjoy the magical sound of the boat pulsing through the water.

Setting sail aboard the Hanse 415 was a cinch. We just unzipped the lazy bag, hoisted the full-batten, loose-footed Elvstrom mainsail with the lazy jacks guiding it to the masthead, unfurled the 105% genoa and we were sailing off the mooring. The quickness of our actions was a testament to the sloop's simplicity of design. The Hanse 415 is fitted out with electric, self-tailing winches with push-button controls. The arrangement took the toil out of raising the mainsail, so our index fingers were the only body parts to get a workout.

At the helm, quick response from the chain-linked twin graphite wheels mounted on canted pedestals made steering a pleasure. It was easy to read the digital navigation display because the Simrad center console pivots in multiple directions, dispensing with the need for two consoles or having to deal with the lack of one on the opposite wheel. So there was no need to leave the helm to have a closer look at the windspeed, course heading and other data.

Nor was there any other compelling reason to exit the comfortable cockpit, since the halyards and jib sheets run under the coachroof and back to twin pairs of Lewmar self-tailing winches bolted to the coamings. This arrangement was made even more convenient by a bank of five rope clutches to either side, installed on the coaming between the manual and electric winch, further ensuring control of the running rigging.

When it came time to change course, the self-tacking headsail made it unnecessary to give much thought to the sheets, something Hanse senses may be appreciated by singlehanded sailors and aging babyboomers alike. The boat's German mainsheet system allows you to pull in or ease the mainsail from either the windward or leeward side added to the overall simplicity.

Our boat was fitted with the cast-iron ballast, shallower L-shaped keel, but even on a beam reach it showed no signs of excessive heeling or giving way. And nobody complained of weather helm. It made us wonder just how much better the deeper, T-shaped keel might perform, particularly upwind.

With the breeze averaging 20 knots on the bay and gusting, the boat remained trimmed and on course while noticeably gaining speed. We watched the speedometer enter the double digits and continue to climb as we broad reached. While were sailing hard on the wind and it came time to change course, tacking was effortless with the self-tacking headsail. We tacked and tacked again, admiring how little effort it took. When turned downwind, we surfed in the following sea, and the boat was clearly at ease in such conditions, in some instances skipping over the waves and affording us an unforgettable afternoon sleigh ride. It was, in a
word, fun.